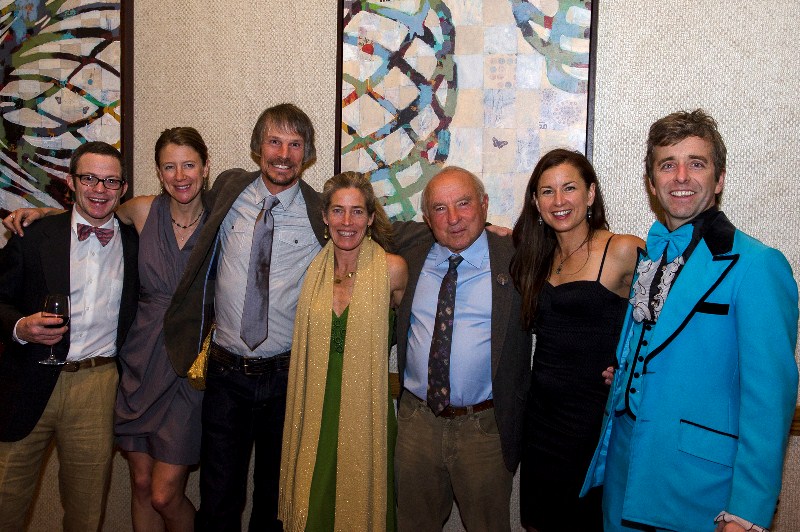 “Holy guacamole,” I mumbled to myself. “There are a lot of ties in this room.” Lots of exquisite dresses, too.

I was at the recent American Alpine Club Annual Benefit Dinner, which begs the question of place: What was my broke ass doing in a VIP seat, wearing a borrowed bow tie, at a fancy fundraiser?

I agonized over wardrobe. As a person, I’d planned on jeans and a T-shirt. After all, it shouldn’t matter how you look on the outside. Then again, we have cultural norms, and I didn’t want to disrespect anyone, no matter how silly the norm. Ahhh, the issues that burn.

I hate ties. Nice shirt, fine. You’re wearing a shirt anyway (unless you’re a climber dude who wants to show-off his physique, in which case a beanie substitutes for a shirt). And you have to wear pants anyway, too (I don’t know if you know this or not, but you can get arrested without them). But a tie? A tie has to be the stupidest piece of attire in the whole entire world. Yet I have a soft spot for the bow tie. Don’t know why.

Regardless, a guy like me doesn’t miss many free dinners, and I knew enough to never scratch my head during the live auction. Some observations from the American Alpine Club (AAC) dinner:

• Several years ago the AAC made the wise decision to separate the fancy dinner from other events spread throughout the weekend. Some events are more open and appeal to the younger audience, while the fancy dinner is for fundraising and connections between old friends. We all get old, and memories are all we really have.

• My friend Janet Wilkinson was inducted as a new member to the AAC’s Board of Directors. Which is great not only because she’s a real-deal climber, smart, and about half the age of the typical BOD member, but because it immediately worked to my benefit. Her husband, my friend Freddie (who received the AAC’s literary award), came along and happened to have an extra bow tie. Bingo. 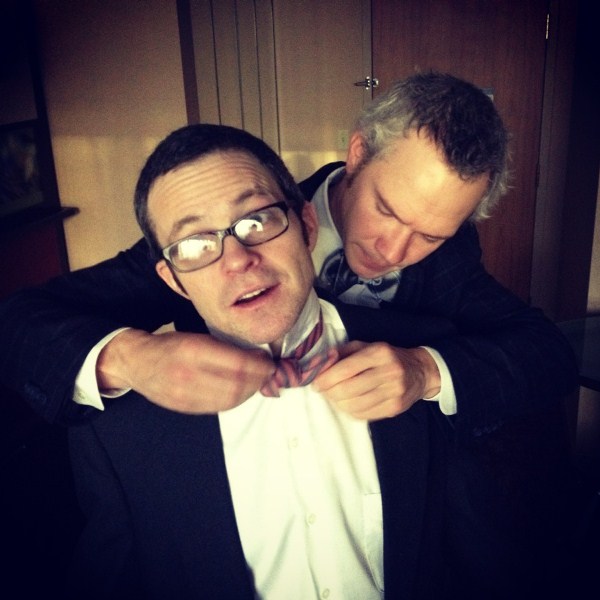 Kelly and Freddie tie one on. Photo: Janet Wilkinson

• Side note: On occasion I’ve been asked by active young climbers if they should attend the AAC dinner. (For 12 years I was one of the editors of the American Alpine Journal, and twice I attended annual dinners for work.) No way. If you’re scraping to spend all your money climbing, keep doing it. Climb. When we’re old, if we’re fortunate enough to be able to give back to the thing we love, do it then. But first, create the memories.

• Best comment at the Saturday panel discussion, The Extra (X) Factor: Pioneering Women in Climbing, came from Melissa Arnot. As the distinction between “climber” and “female climber” becomes less relevant in discussions of accomplishment, potential and drive, tiresome questions remain. When asked about motherhood, Arnot astutely replied that the question would never be asked on a panel of men.

• Steve House, the finest American alpinist of his generation, and one of the best ever, received the Underhill Award for lifetime achievement. Little more needs said, as his incredible list of accomplishments speaks for itself. He does, by the way, have a new book out, with co-author Scott Johnston. It’ll surely become a bible for current alpinists: Training for the New Alpinism: A manual for the climber as athlete. 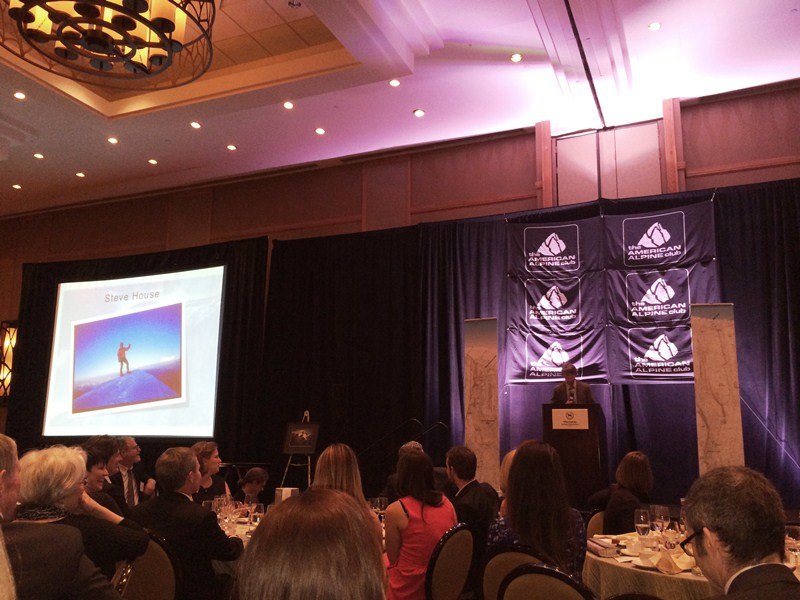 • Jim Balog received the Brower Conservation Award for his incredible work with the Extreme Ice Survey and Earth Vision Trust (his nonprofit). His work is not only the definitive documentation of the world’s rapidly receding glaciers, but he’s trying to do something about it by advancing policy and education (by now, I think all but cave-dwelling troglodytes have plenty of “awareness” of the problem – Kickstarter climbing expeditions to raise awareness for global warming take note…).

• When it came time to support the youngsters emerging from climbing gyms, the “old guard” raised a shitton of money for a new AAC program to educate those making the transition from climbing indoors to climbing outside. It’s another problem of which, as per the abundance of yearly accident reports, we’ve got plenty of awareness. Much to their credit, the AAC is doing something about it.

• For the main event, Yvon spoke and showed old photos from his early life and progression, including the golden age in Yosemite, and held the audience of 600 rapt with his classic style – the one-liners, his sincerity, honesty and a spirit that values the past – without getting stuck in it – while looking to the future. That’s what I love about Yvon and the best of the old guard: they embrace what’s worth keeping and ditch the rest. 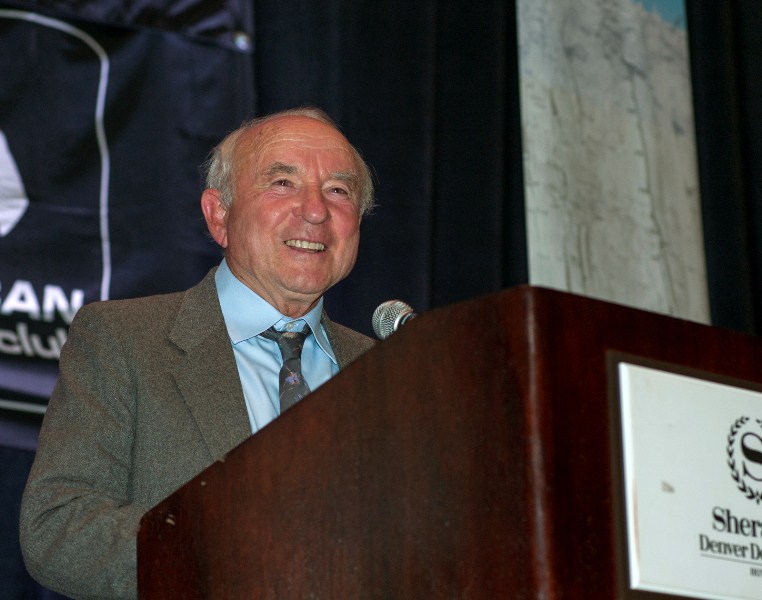 A few more photos from the weekend: 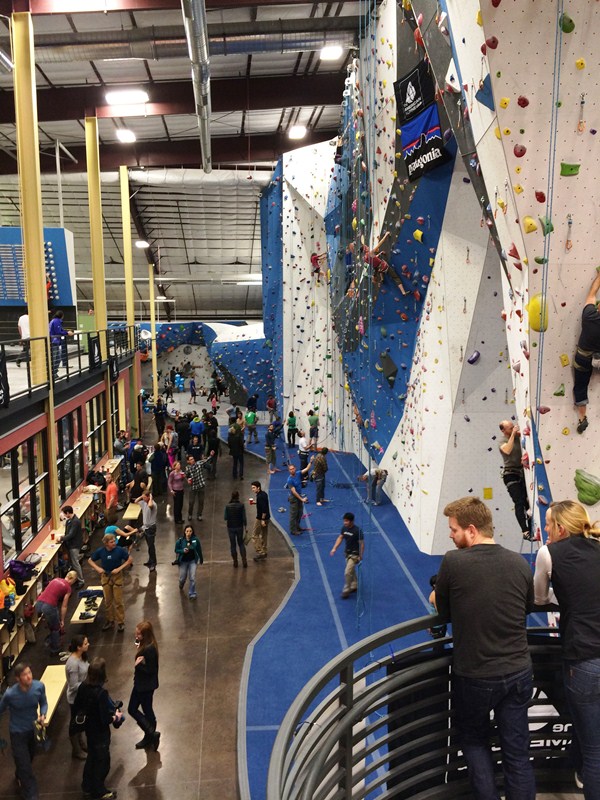 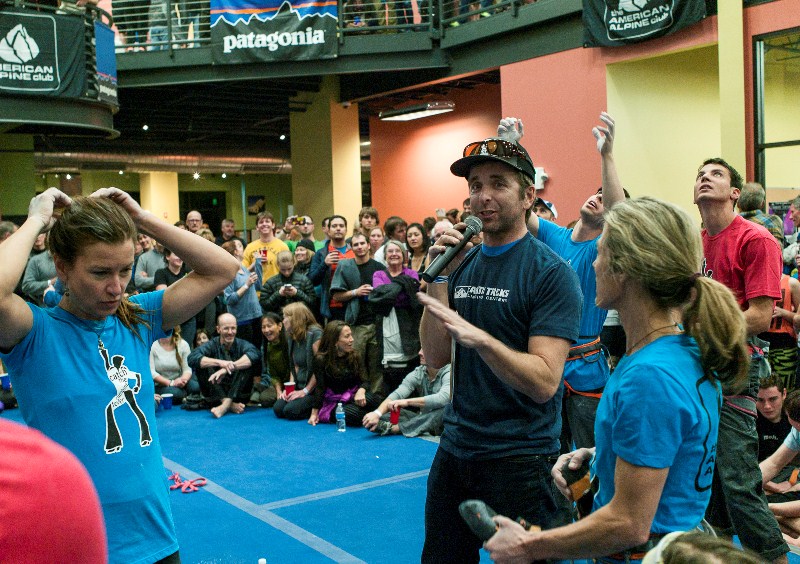 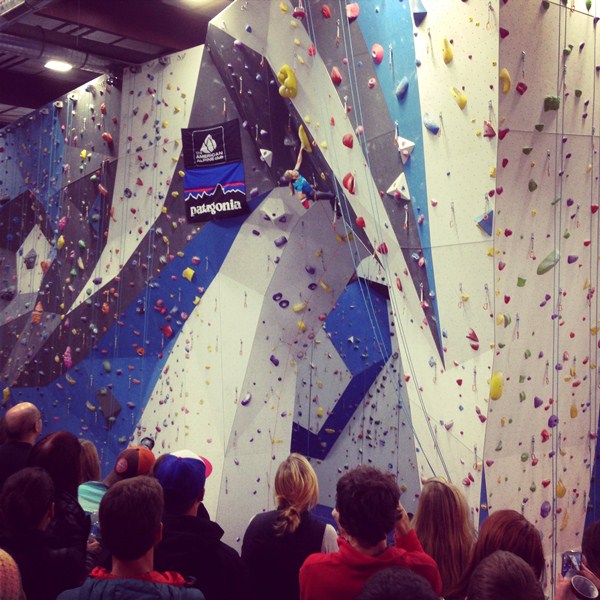 Lynn Hill came in second in the women’s division and stole the applause from the crowd. Photo: Jenna Johnson 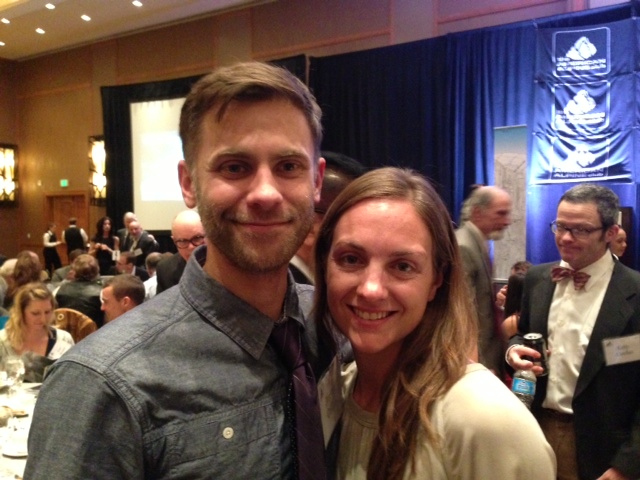 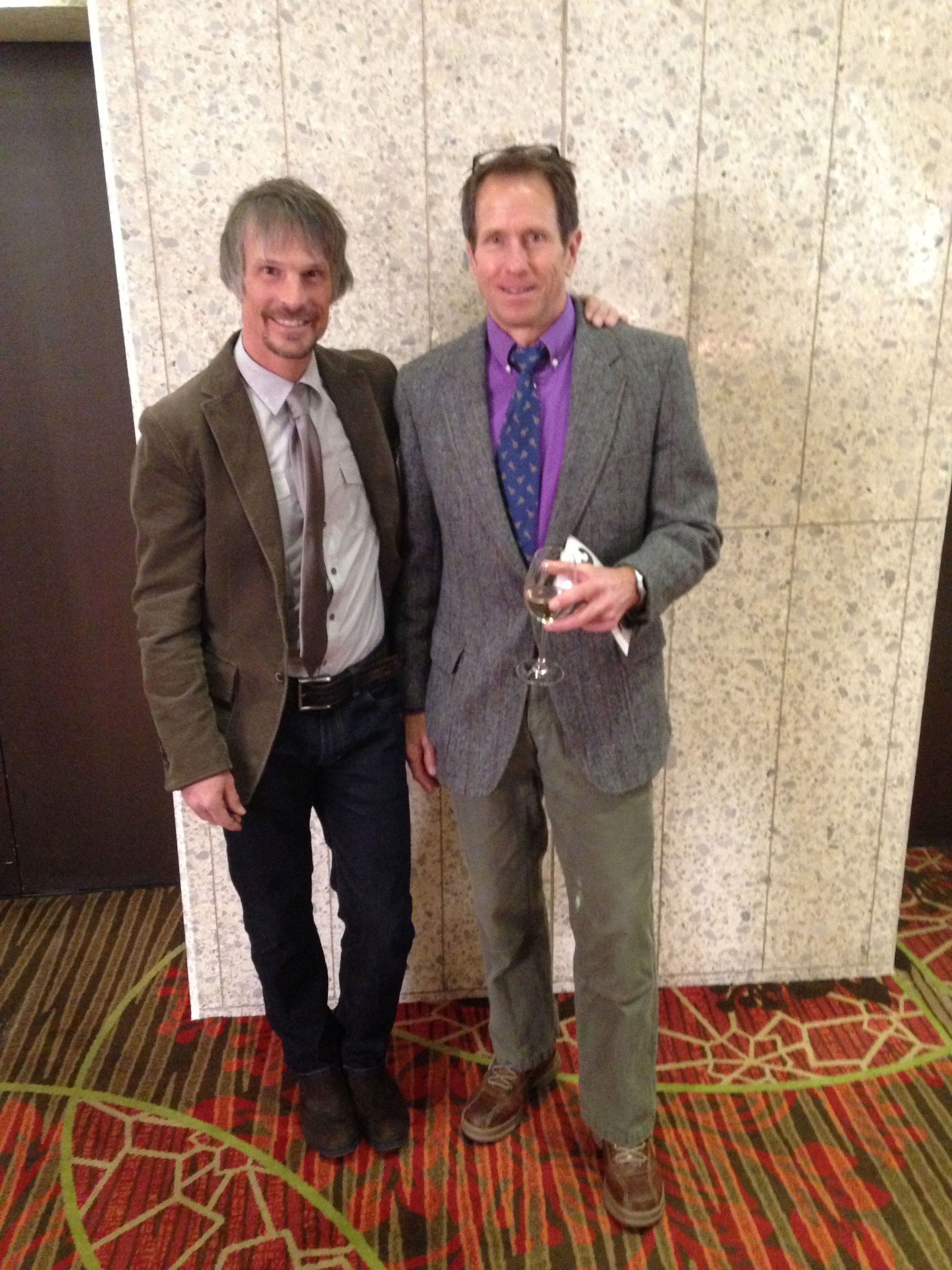 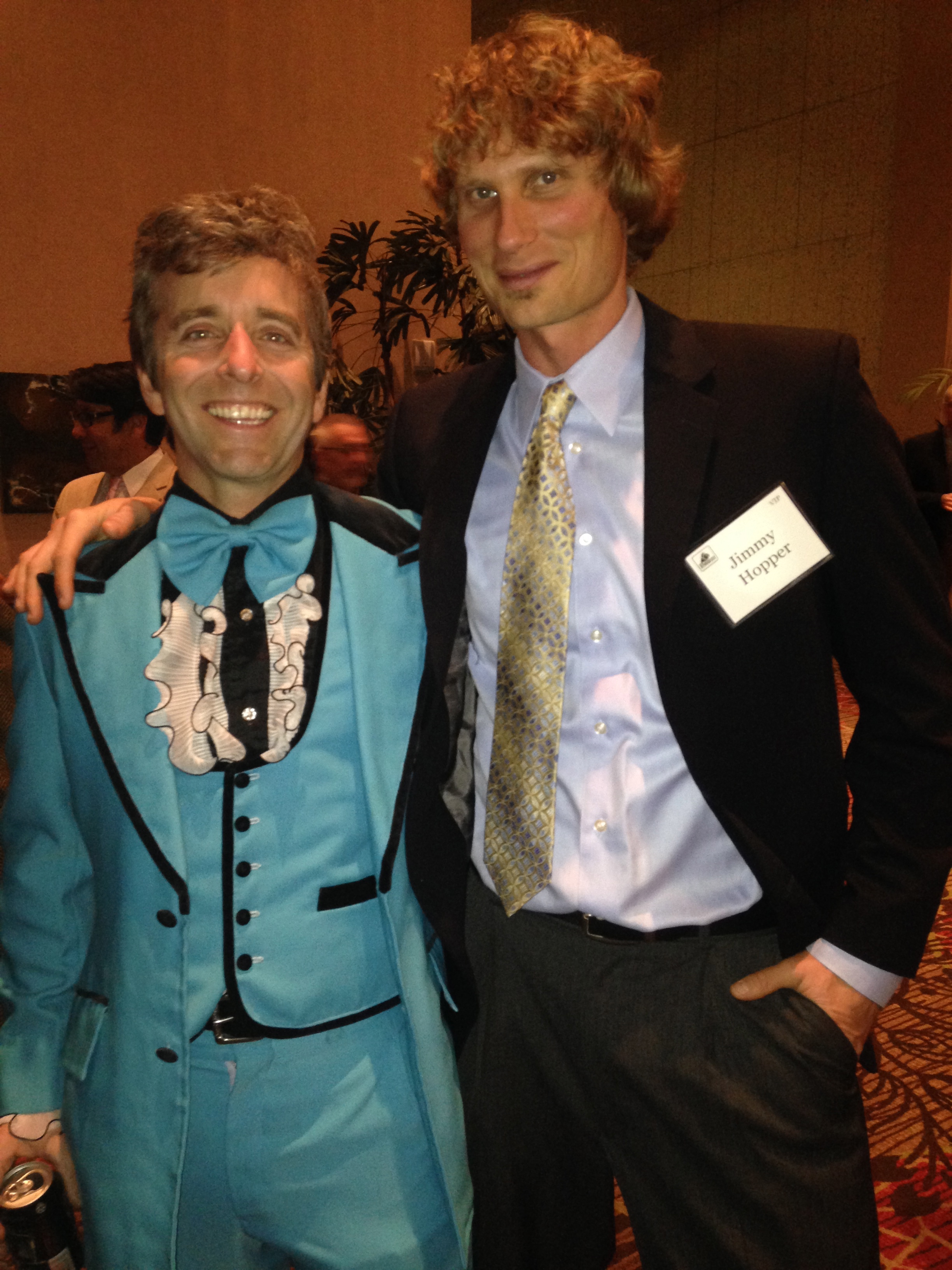 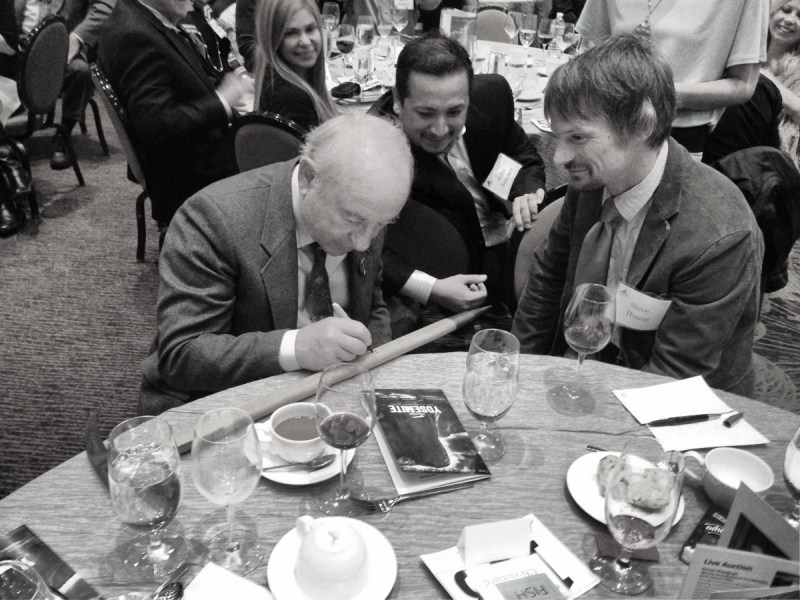 Yvon signs a Chouinard ice axe for one of the dinner guests. Photo: Jeremy Collins

When you think about it, as we age there is no greater honor than to watch the next generation go zooming past our previous highpoints. Everything builds on everything else. Maybe the unspoken goal of the AAC fundraiser dinner was to enable the zoom.

I still maintain that ties are stupid, but what we wore around our necks didn’t matter – a love of climbing really tied the room together.

More coverage of the event and Yvon’s speech:
“When Climbing Was Dangerous and Sex Was Safe” by John Heilprin, AAC
“Sharma to Chouinard in a Weekend” by Alison Osius, Rock & Ice

Ready to join the American Alpine Club? Become a member