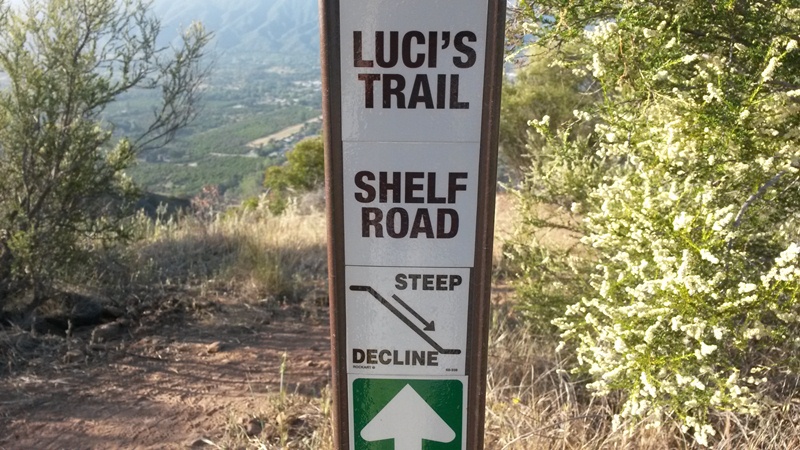 Back in February, I started volunteering for the Ojai Valley Land Conservancy (OVLC), a nonprofit that protects open space through land acquisitions and conservation easements. They have a number of preserves scattered across the valley and the Valley View Preserve was their newest one. OVLC volunteers had already built two trails on Valley View and were now building Luci’s Trail. While I was out on a hike I met Bill Brothers, a volunteer who said they could use my help building Luci’s. I asked when could I start.

On my first day, Rick Bisaccia, the preserve manager, had six of us clear a thick stand of poison oak. One volunteer cut the branches back with a chainsaw while I used a pitchfork to toss aside the leafy debris, wearing only a T-shirt and shorts. Two days later a bumpy red rash appeared on my arms and shins then spread to my back and face. The skin-crawling dermatitis stayed with me for a month.

Digging tread was the fastest way to get dirty. Mike Gourley and I would swing our picks down into the dry earth and soon be covered in a silty brown haze that had us coughing in no time. When boulders had to be removed from the trail, we used long iron bars to pry the behemoths from their resting place, sending them tumbling down hill.

Rob Young, our resident geologist knew how to expertly build rock steps. One volunteer built stairs up a steep incline and Rob said the rocks were too small and needed to be replaced with bigger ones. I’d scramble up the hillside, and Rob would point out which rocks he wanted and I’d knock them down with my pick. Once the steps were placed on the trail we’d give them a test run by jumping up and down on them. If they didn’t wobble, they passed. 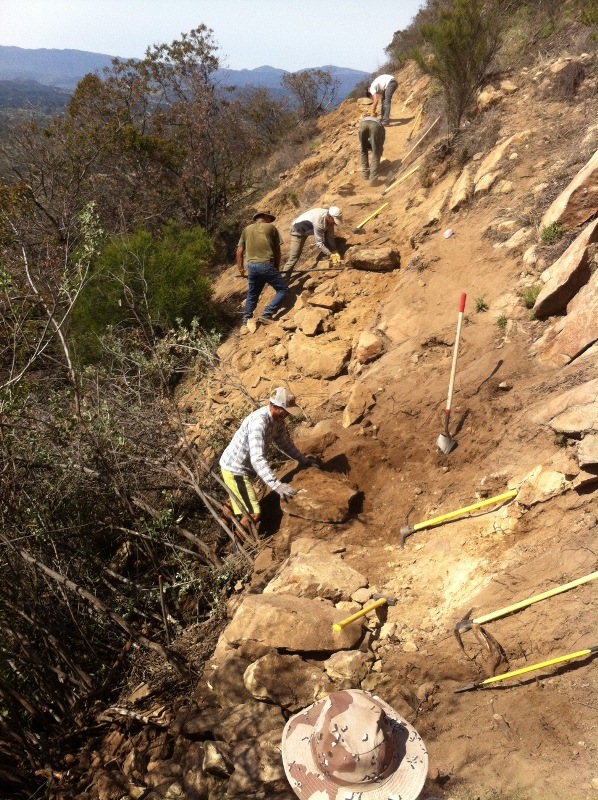 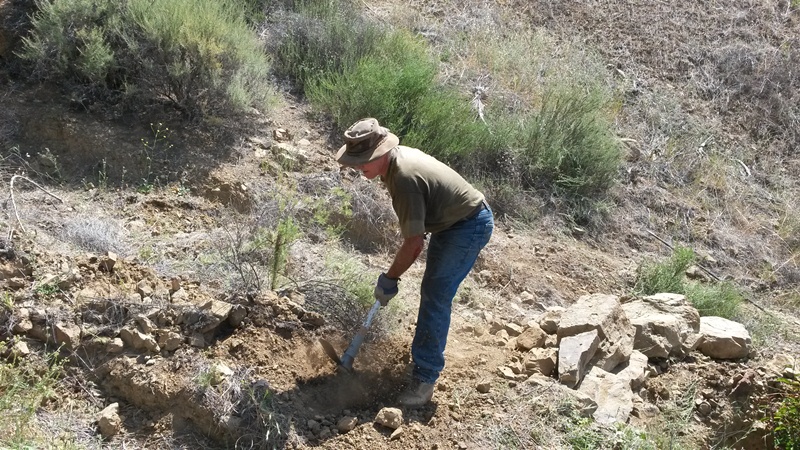 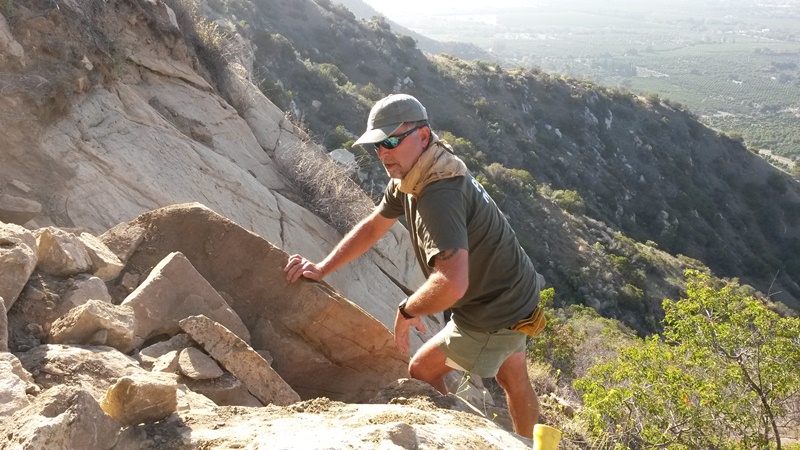 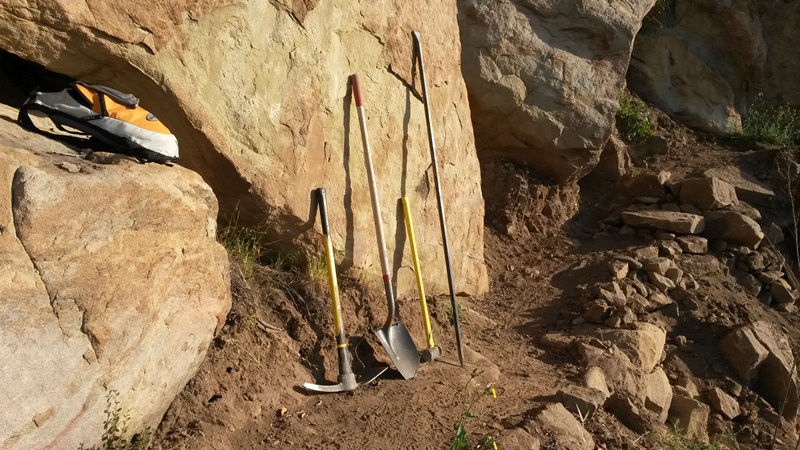 The pickmatic and shovel were our go-to tools, but when large rocks were in the way we used a sledgehammer and pry bar to get the job done. That iron bar could double as a javelin at a Scottish Highlands game. Photo: Craig Holloway 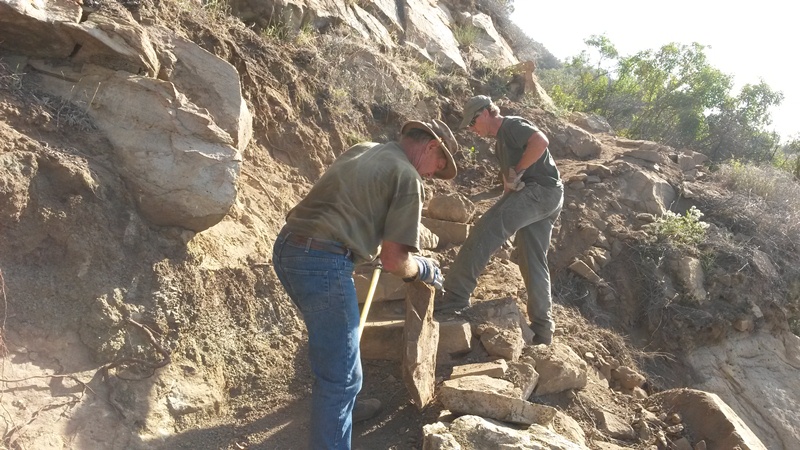 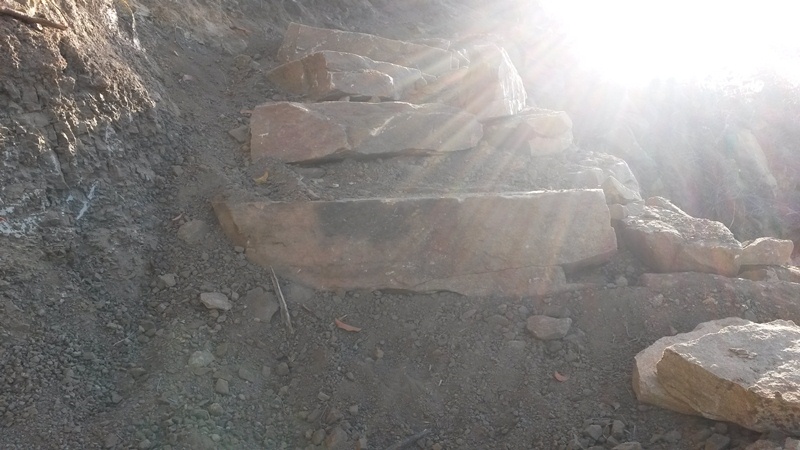 Patagonia’s own Jim Little christened the rock steps “Satan’s Staircase” on one of his mountain bike rides down Luci’s Trail after the work was completed. Photo: Craig Holloway

During our last day, we built the trail all the way down to Shelf Road. We celebrated six months of hard work with handshakes and Cokes. Two weeks later I returned to hike Luci’s. Clouds rolled in and the sky changed from California blue to Midwest grey. It began to rain as I climbed up the rock steps. Each step felt good, each one I took got me closer to the top.

I would like to thank the Ojai Valley Land Conservancy for allowing me to participate in their trail-building program. OVLC volunteers are some of the finest folks you are likely to meet. Please consider volunteering for a local nonprofit. They could use your help. 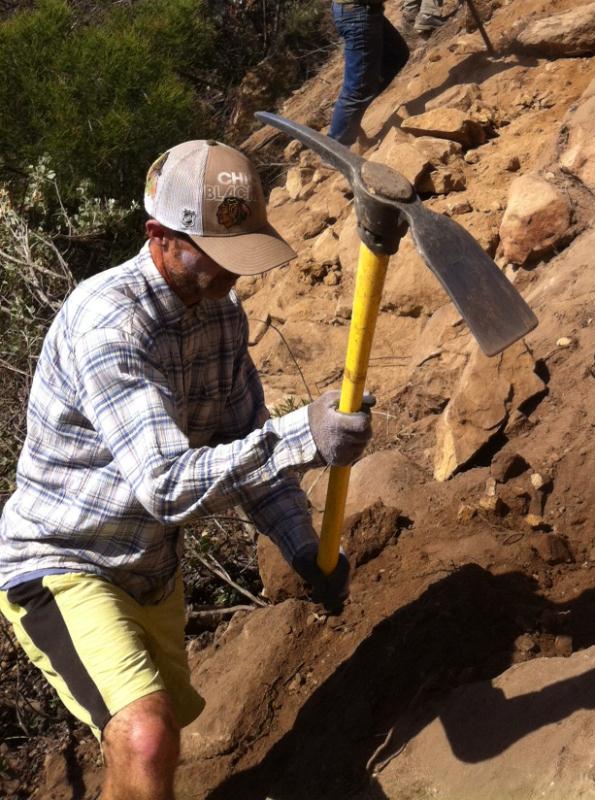 Craig takes a turn with the pickmatic. Photo: Rick Bisaccia