“Chilean Patagonia is a remote region of the world where nature–long left to its own devices–grows wild, beautiful and largely untouched by man. As South America's last frontier, the region boasts incredible biodiversity, breathtaking landscapes, essential ecological values, and a remote solitude that is increasingly rare.” 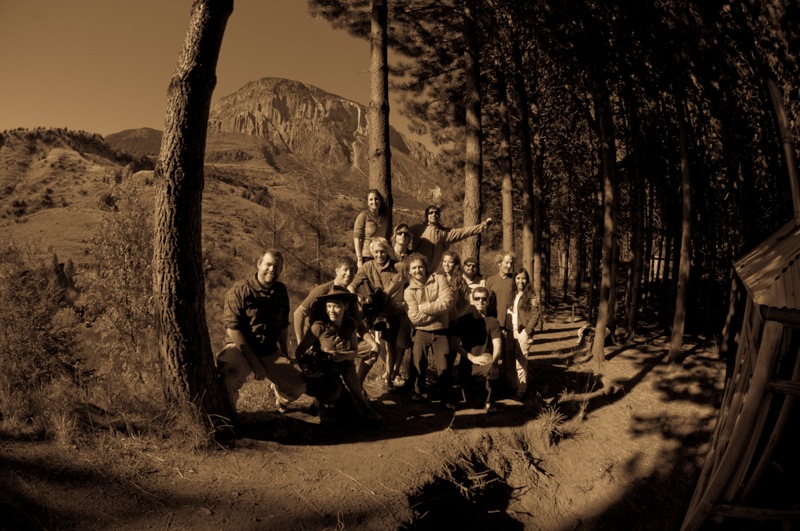 The above is taken from the blog-in-progress for a group of dedicated conservationists, Team Rios Libres, made up of photographer James Q Martin, author Craig Childs, cinematographers Denise M. Stilley and Ed George, Wildlife biologist Chris Kassar, Patagonia Climbing Ambassador Timmy O’Neil, local river guides, and Chilean journalists and conservationists. Together, their mission is to Protect Chile’s most wild and magnificent rivers from a consortium of European and Chilean mega-companies that are actively seeking to forever alter these natural jewels. The plan Rios Libres is working against would place a total of five dams along some of the magnificent rivers that are the lifeblood of this richly diverse region. Two of the dams will be placed along the Rio Baker (rhyms with “soccer”), Chile’s longest and highest-volume wild river. The remaining three dams would be built along the Rio Pascua, Chile's third highest-volume river.

The dams are not the only impact planned for this region. To extract the power they are planned to generate, the builders will have to clear-cut at least 1,600 km (1000 mi) of pristine old-growth forest to install the world’s longest high-tension transmission line. Over 2,450 km (1,500 mi) of line would be built to transport the electricity northward to support population centers and, ultimately Chile's massive mining industry. The Rios Libres team states the impacts succinctly: “Together, the dams and transmission lines would damage communities, scar the landscape, and wreak havoc on ecosystems. Additionally, these projects would hasten the extinction of species such as the torrent duck, the Chilean river otter, and the endangered Chilean deer, the huemul.”

Team Rios Libres’ goal is simple: to give this threatened area a voice by documenting this incredible natural resource in its pristine state and by highlighting what the area means to the people, plants, and wildlife that make up its ecosystem. These are their first words from the field:

[The group gathers to begin their journey. All photos: James Q Martin] 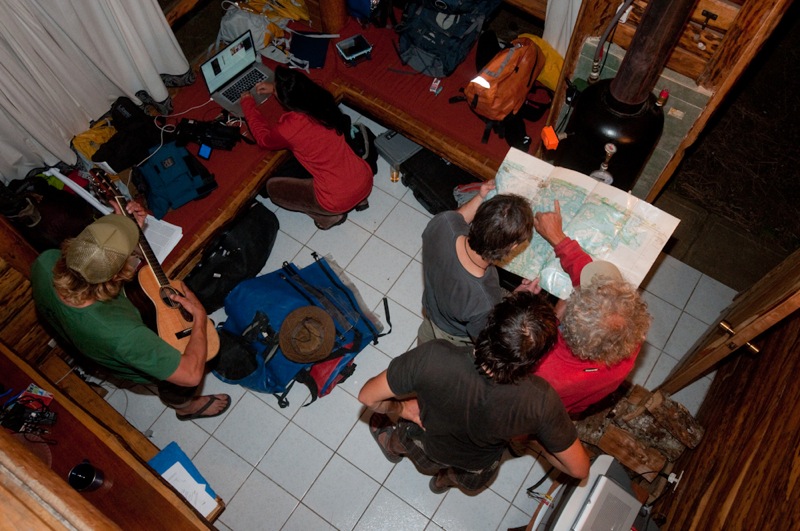 Synergy in the South (a report from Chris Kassar)

Images of the magnificence of Patagonia abound: snow-capped peaks, flowing rivers, pristine forests, indigenous people, beautiful cultural traditions. Visual depictions of this amazing land and the people who call it home are the first thing that you notice when you arrive in this region of Chile – in airports, airplanes, restaurants, cafes, hardware mega-stores, on roadside billboards …..everywhere.

However, despite an obvious national pride for the area, the wild character of Patagonia is at risk. This is why each member of our team of  7, also known as "Rios Libres," have spent the last few days working our way here from various points on the globe. There's a proposal to put 5 dams on 2 of Patagonia's most pristine rivers and we're down here to do our damndest to create something that will help draw international attention to the issue.

Since our arrival, we've been working hard to make contacts, track down information, conduct interviews and prepare for our river and glacier expedition. We've been met with overwhelming support thus far and the locals have gone out of their way to befriend us and to help us make the connections that will be invaluable to the success of our effort.

This morning, the energy is high despite minimal sleep over the past few days. A pot of water bubbles on the stove, eggs are sizzling, gear is being sorted and bags are being packed. Timmy O'Neill hovers over the stove – eager to provide the team with steaming cups of cowboy coffee and a hot breakfast. Timmy arrived in Coyahique (our current home base) after an epic adventure climbing the north and central towers in Torres del Paine, on the edge of the third largest ice field in world. Timmy is to blame for the team's sore belly muscles – a result of his quick wit and our inability to resist laughing at almost every word that leaves his mouth.

Craig, our resident writer, who had to shovel his way out of his home in southern Colorado only to arrive in Santiago to find out that the reservation for his next flight had been canceled, sits peacefully on a wooden bench overlooking the river and jots notes in his journal. Although I don't know what he's writing, I'm sure it's insightful, brilliant, beautiful. He has a knack for perfectly capturing the moment and I wonder if some of this morning's musings will find their way into his next book, article or NPR radio commentary.

The rest of the team scurries around reveling in our last showers (for a few weeks anyway), gratefully slurping muddy caffeinated water and working out the logistics of the day.

Next door, our fearless river guides prepare the rafts and kayaks and organize a massive amount of food. Josh Lowry, a world-class kayaker and a fixture in the guiding and exploration community has some of the most notable first ascents in Patagonia.

He and his crew have traveled a long way from their home river, the Futaleufu. Josh has experience fighting dams – the Futaleufu is also threatened by a hydropower project that would alter the river and the lives of the people who depend on it. Our cinematographers, Ed George and Denise Stilley, shoot footage of the whole process: sorting, packing, loading, laughing and planning.

I have to keep it short because I was just summoned by Q, our team leader and photographer to join the rest of the team outside for a pre-trip photo. (We need to document the fact that we were all clean at one point). Q is the reason we're all here and he and I put in countless hours of work to make this happen.

In a few hours, we'll set out on the river. Our hopes are high for what the next few weeks hold and for what we can accomplish. However, we all recognize that the work has just barely begun. 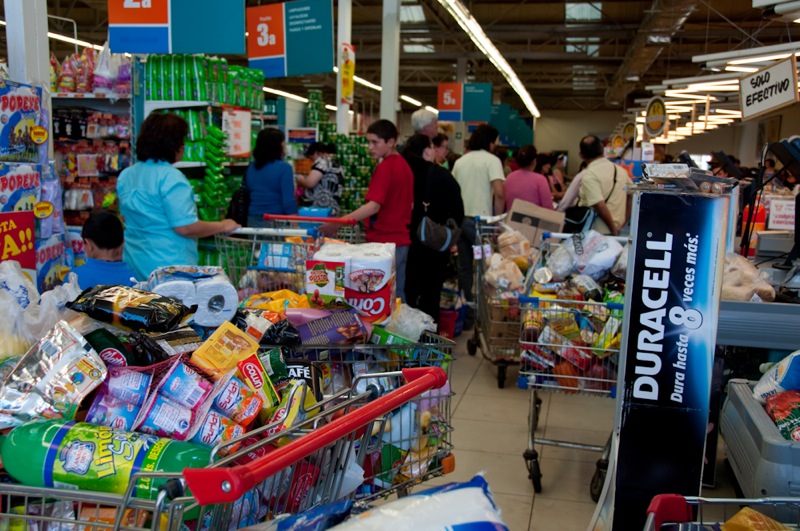 The Journey Begins (a report from Craig Childs)

Delayed flights, cancelled reservations, bad Spanish, and I ended up stuck in Santiago on my way to Coyhaique.  Instead of preparing for the Rio Baker with everyone else, I wandered through a city of 6 million just shy of midnight, prostitutes on the corners snapping, hissing, clapping. They sounded like woodpeckers broadcasting through a forest.

It always seems to happen this way. The journey becomes an unexpected menagerie, and you're sleeping a thousand miles from where you thought you'd be. For the next month I plan to be in Patagonia on the Baker and up in the Colonia and Neff Glaciers in the northern ice field, joining a documentary crew on a river that, like so many others in the world, is threatened by major dam proposals.

Fortunately, for me at least, this was the night before the earthquake. The next morning I took the first flight out of Santiago, 20 hours before the region was hit by an 8.8, followed by bursts of after shocks pulsing along the very active edge of the Andes. We felt nothing in the cool forest around Coyhaique – a space between the quakes – and did not even notice the effects in town but for cars lined up around the corner and out of sight waiting for gas. Phones were down, nearest airport closed, far-away bridges collapsed, Pan-American Highway severed. Patagonia fell just that much farther off the everyday map.

When we could, we each got messages home. I assured my wife in Colorado we were far from any earthquakes, but she had been online and fired back that we were right in the middle of it, a state of emergency declared for a town just south of our intended takeout. She was worried about the Rio Baker, and the possibility of a glacial lake outburst flood, events that have been happening with greater frequency in southern Chile as ice melts, lakes form, and natural dams break. The Baker has seen jumps of 500% from these floods. 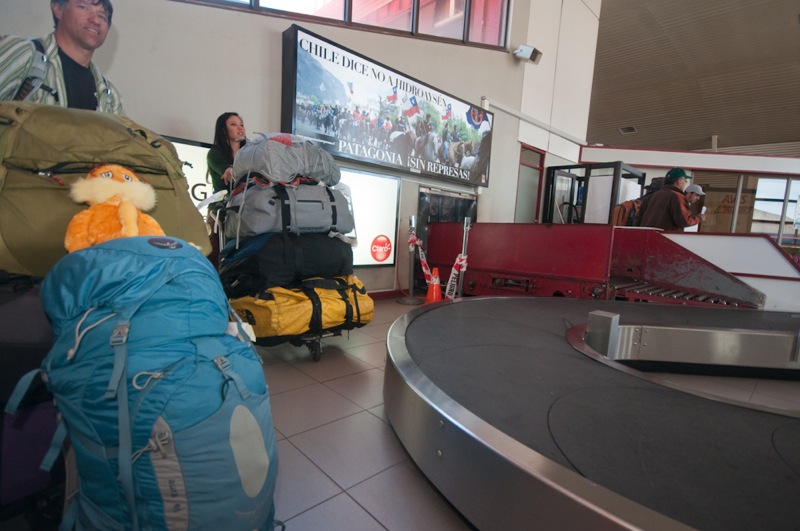 These floods are bad news for dams that are proposed one after the next, taking these rivers down like dominoes.  According to a study last year, dam proponents have not adequately accounted for the possibility of these outburst floods. Daniel Gonzalez, a leader in the ¡Sin Represas! campaign to stop the dams, wrote, "Among the most relevant flaws found in the study were the lack of data on seismic risks in a region known for quakes and volcanic activity."

Earthquakes are just the beginning. We came to the Aisén region of Patagonia to take a look for ourselves, and to record what are, we hope, not the last years of free-flowing water. Our brief stay in Coyhaique has afforded the time to interview local activists. Today we spoke with the Bishop Luis Infanti in his garden, where he told us that the land and the river are of God, not to be stolen or destroyed, not by human hand.

Tomorrow, we leave for the river as planned. Posts will be sporadic, but we will do whatever we can. Stay tuned. For at least the next ten days we will be gone, carried into the heart of this tumultuous land. No dam stands in the way. With the work we plan to do, we hope that no dam follows.

The Arch Bishop (a report from John Tveten) 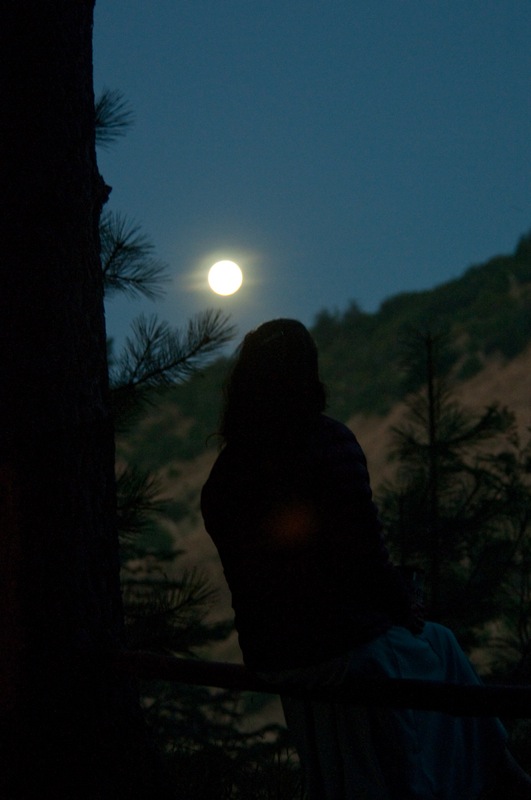 While our film team was interviewing the Archbishop of Chilean Patagonia yesterday we asked him, "Why is the church involved and why does he feel compelled to fly to his native Italy to take the movement against the dams to the home turf of the Italian Mega Corporation that is the parent company to HidroAysen.  His answer was simple:

"Because the water and the land belong to God.  We have a responsibility as guardians to care for it in the way it was entrusted to us."

This may be what you would expect to hear from a man of the cloth, but to sit by the flow of the river, hear it's song as the near full moon rises above the ridge, no matter your beliefs or non-beliefs you can't help but know that you are in the presence of the divine.

I am happy to be a part of Rios Libres.  Happy to be joining the Bishop and the many other committed guardians in our quest to find and raise the voice of the Rios.