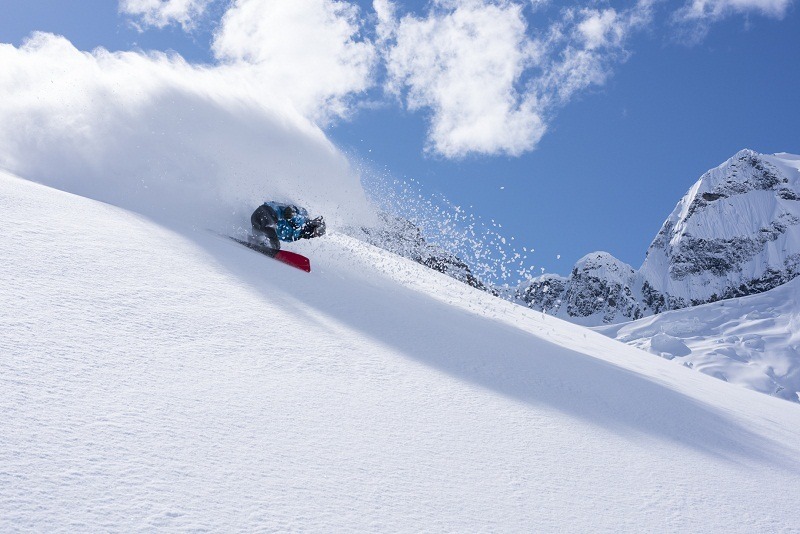 Feeling lost. Feeling far from help. Far from a store, motors and people. I am existing in a world much bigger than I can comprehend. What I can see is all that is. I’m alive to find what I can’t yet see. There are two times of day: light and dark. Food is fuel for the body, not a dance for the tongue. The cold bites. The sun scorns. This is a taste of what life was like before modern technology began introducing non-essentials and conveniences.

All the while, it is 2015. I have gadgets that tell me where I am. I have a mobile phone that can bounce my voice off of a satellite in outer space and send for help if something were to go wrong. Still, there is a romance in my heart that writes off all of the comforts and emergency equipment. In my mind, I am free. In my heart, I’m just an animal lost in the wilderness.

As soon as I agreed to be woken up in British Columbia’s Jumbo Valley at 3:00 a.m., I knew the next day would be interesting. My tent shook followed by a gravelly voice that ripped me from my much warmer alternate reality, “Wakey, wakey.” The thought of unzipping my goose down cocoon for a very dark, very crisp existence was the first step in a series tasks prefaced by deep breaths. Food, water, headlamp, beacon. Okay, let’s get moving. As the lone splitboarder in the group, I opted to keep my skins on for the initial descent through undulating, south-facing, refrozen, densely forested terrain at four in the morning. My skills on two planks had never been challenged on this level. Sure, I was in my element, but I felt as on point as an elephant roller-skating through the hills of San Francisco.

Making it through the pre-dawn, side-hill cage match unscathed gave my parallel-sliding confidence a welcome boost. Darkness is still straining our gaze as we pull off for a break. Barely a silhouette, our objective has all of the characteristics of a rideable face. “Looks good!” Max Hammer and I chuckle (we can barely see our feet). With the tree line fading, half of the four-man crew took this opportunity to lighten their loads. 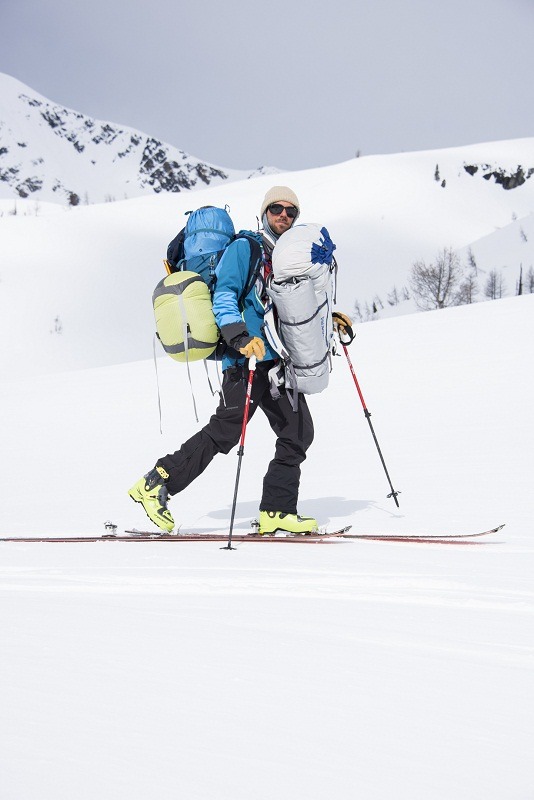 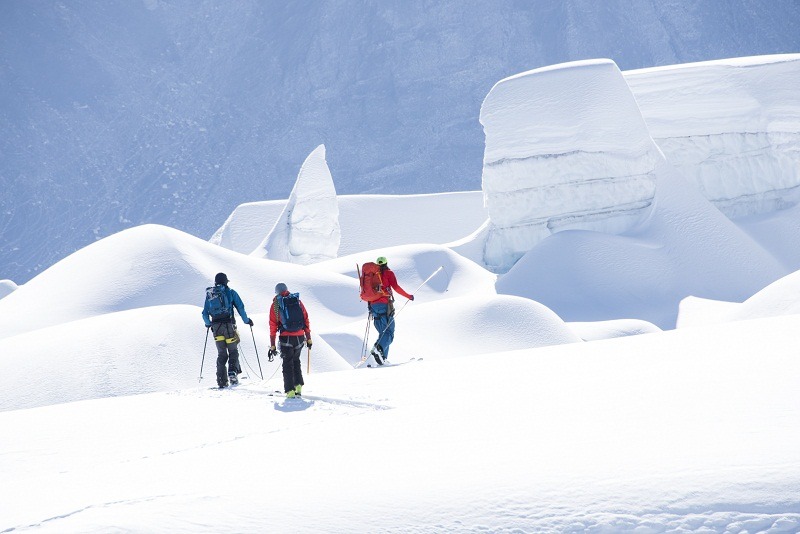 It was time to space out. Brodie Smith, our guide, resident comedian and camp DJ, begins to zigzag up the broad apron to the east of the face. This is our only safe route to the ridge where we plan to gain the peak. Time is on our side. The sun welcomes us with a warm embrace as we crest onto the ridge. As the expansive Purcell Range becomes visible I find myself pondering this existence. Why do we need so many things back in “real life?” Why do we want to exploit so much of the world’s natural beauty for cash? When will we collectively as humans realize we have become accustomed to an unsustainable existence? I then pull out my goose down jacket, nicely packaged organic snacks and insulated bottle full of hot Yerba Mate from South America. Contradictions are commonplace in today’s world, but the scale and premise on which we choose to exist is the truest measure of character.

When you find yourself in a place so far removed from the developed world, so wild and abundant, it’s hard to believe that such a place hasn’t been acknowledged for its sanctity and decisively designated as a national park or something to that effect. Here we are, on our way to a peak in the Jumbo Valley, feeling completely detached from society yet fully aware that this area is vulnerable and could potentially become a place writhing with stores, motors and people before we know it.

In Jumbo’s case, the development of a world class, year-round glacier ski resort has been in discussion since the early 1990s. The resort would host a 6,250-bed village at the base area accompanied by 22 chairlifts and gondolas one of which would take you to a “Tea House” atop the majestic Glacier Dome. I can attest to the fact that it is indeed a great place to slide on snow, but there seem to be an abundance of reasons that test the location’s candidacy as a logical environment to drop anchor.

For me to balk at the idea of a ski resort would be completely hypocritical. I love ski resorts. Who doesn’t like getting a quick lift to the top or the unearthly luxury of toying with gravity all day, up and down? Lifts allow you to ride as much as your body can handle and, at many resorts, they give you access to high ridges outside the resort boundary, a massive head start into the backcountry. I likely would have never visited Jumbo if it weren’t for the lift access at Jackson Hole that allowed me to develop my skills. I just can’t help but ask, “Why?” When will our society realize there are certain things we have enough of, like ski resorts, and others we need more of, like protected lands? 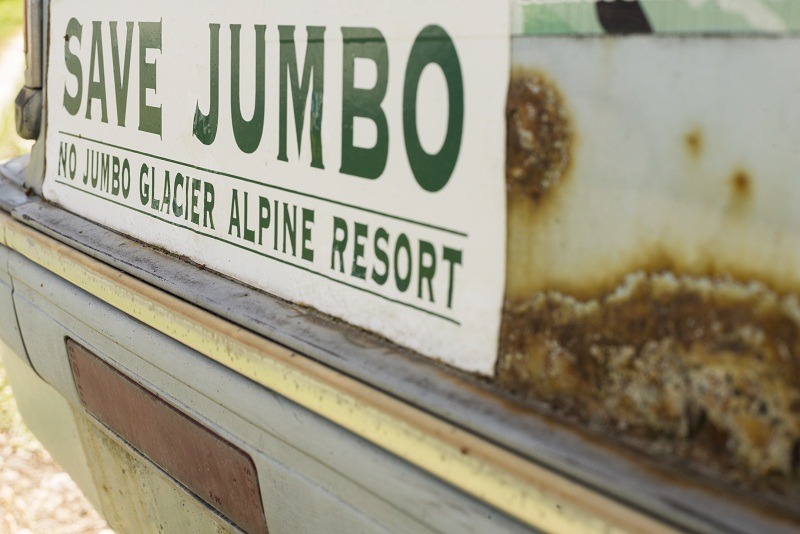 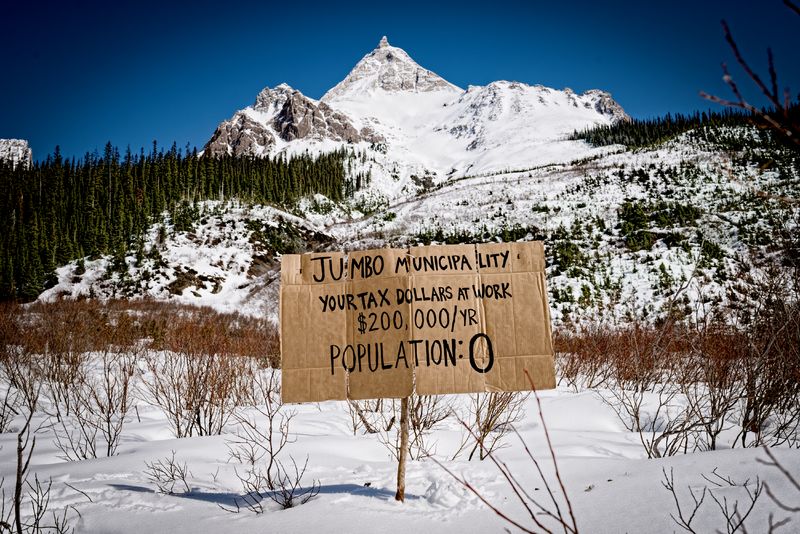 Beyond the small, bizarre victory of having an imaginary town of Jumbo legitimized as a Mountain Resort Municipality (Jumbo the town has no residents, no infrastructure and no tax base, but has a mayor and town council), there has been very little movement on the proposed Jumbo Glacier Resort. Photo: Garrett Grove

The ridge is getting steeper with every step as we inch our way into “don’t look down” territory. The wind had visited this ridge before us with no attempt at covering its tracks. This leaves our toes to break through the crust layer like battering rams. Each step feels like a choreographed dance: look up, step-step, punch-punch, repeat. Accepting the possibility of danger in the mountains is akin to that of driving a car. Your beacon is your seatbelt and your awareness is your only shield from a random unwanted encounter.

Five hours have passed since we left camp. Our first time looking at the face from the top we can see about three meters down before the piste rolls over, too steep a grade for our hungry eyes to admire and study every curve and hazard. Beyond that lies a moonscape of avalanche debris on the crevasse-striped glacier. Brodie and Max decide to build a deadman anchor out of a pair of skis on the opposite side of the ridge so we can rappel onto the face and get our eyes on the terrain and our hands in the snow. We can see the line. It’s technical, heelside for me and the runout is exposed by the looker’s-left portion of the face. Having ridden a similar aspect yesterday with great success and minimal reaction from the snowpack we didn’t expect to find a worrisome layer. As Max postholed his way back up the rope, his face wore a look of discontent. He’d found evidence of a deep instability, unlikely to react, but if it did…

A hard decision followed. We’d put so much effort into this face. We could have ridden other closer faces three times in the time it took us to get here. Our photographer had high hopes to create an image of the playful interaction between man and gravity on this specific canvas. But when you think of where you are, why you’re here and our collective and personal goals alike, none of them involve a tragic experience. We came here to exist in nature, have fun, live in the backcountry for a couple of weeks and take home stories to share. 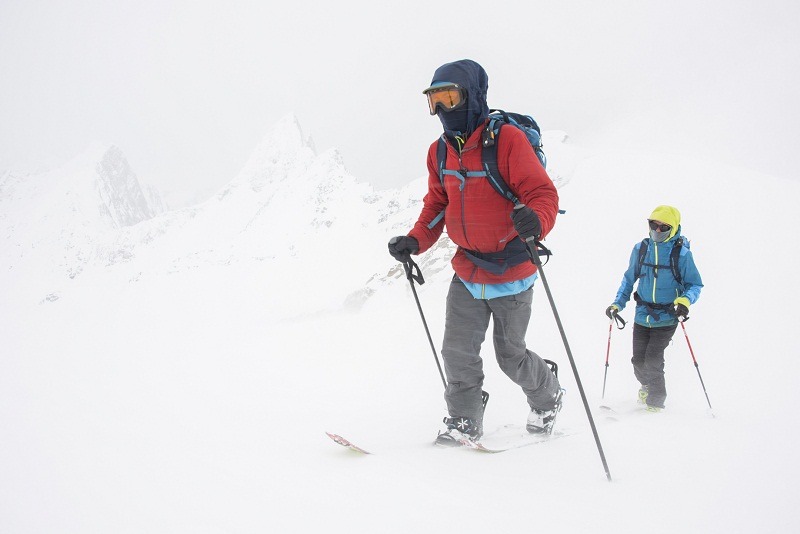 When I look back on it, this disappointing effort was one of the best days of my life. After walking right up to your goal and looking it in the eyes—completing 99% of the effort and all that’s left is the fun part—it’s hard in that moment to wrap your head around how turning back and retracing your hard earned steps could be so fulfilling. The truth is simple: That face was not meant to be ridden. Had we pushed on we were opening ourselves up to the chance of a tragic experience.

In the case of the resort developers, they have been kicking steps into the ridge for over 20 years. The threat of a massive disruption to nature exists with the proposed development and you never know what the outcome will be. After all, it is a huge risk and no risk has a definitive outcome. I just hope the developers can let go of their goal knowing they brought an issue to the table that, in today’s world, is much more jumbo than Jumbo Glacier Resort.

Alex is one of many riders featured in Jumbo Wild, a film by Sweetgrass Productions that tells a true story of the decades-long battle over the future of British Columbia’s iconic Jumbo Valley. Watch the full film now on Vimeo and iTunes. 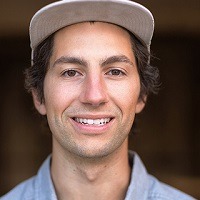 At age 11, Alex Yoder moved from Marin to Jackson Hole. Snowboarding became his life’s focus and he started attending summer school to free up his days for riding. An Alaskan trip at age 18 introduced him to bigger mountains and he never looked back.