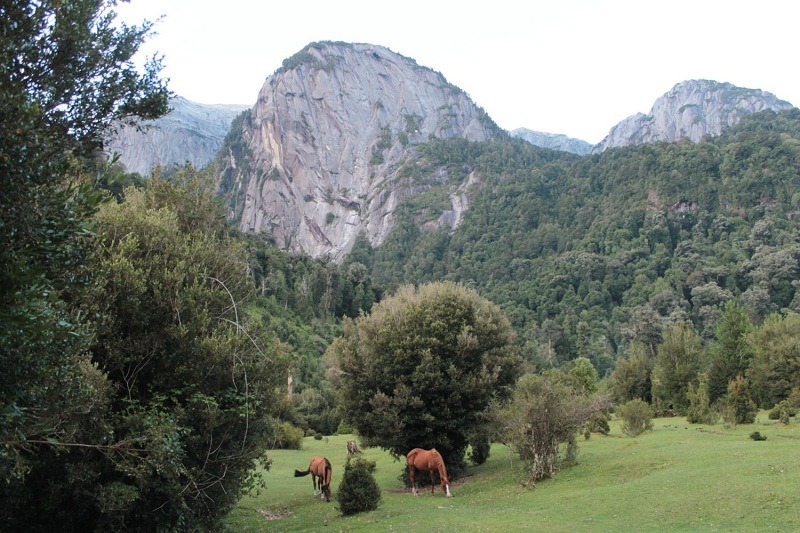 In early 2014, I spent some time exploring the coastline around southern Chile looking for waves and generally just checking out a place that I had always wanted to visit. I ended up heading as far south as Chiloe which is the first island on the coast of where Patagonia starts. It had been a really slow start to the season for waves and so I found myself with my brother Phil and close friend Chris looking for other entertainment while we waited for swell.

We had got talking to an English lady called Kate up the coast and she mentioned Cochamó. She told us about these crazy waterslides and pristine rivers, epic campgrounds and insane granite climbing faces. The place sounded so amazing we had to go and check it out for ourselves.

Above: Horses cruised around the campgrounds the whole time giving the place an even wilder feeling than it already has. All photos by Patch Wilson

Cochamó is approximately a three-hour drive east of Puerto Mont in southern Chile. When you get to the bottom of the trail, past the town of Cochamó, where you leave your car, it is another six-hour hike up into the campgrounds and the valley itself. The trail runs up the side of the Cochamó River sometimes losing site of the river itself but never the sound of the water cascading down huge waterfalls and gorges. As you get deeper and deeper in the valley, the granite walls grow larger and larger as you become encased in a beautiful, pristine forest that is full of towering alerce trees that can live up to 1,000 years. Horses can carry supplies up the trail if you are planning to stay a little longer up in the valley, but whatever goes in with you must come back out. 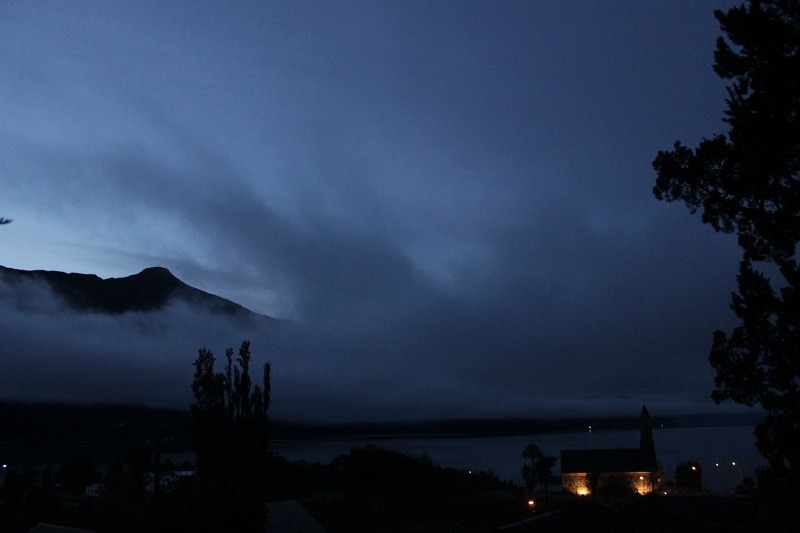 This is the town of Cochamó. It’s really beautiful and there are some good accommodations for before and after the hike up into the valley. 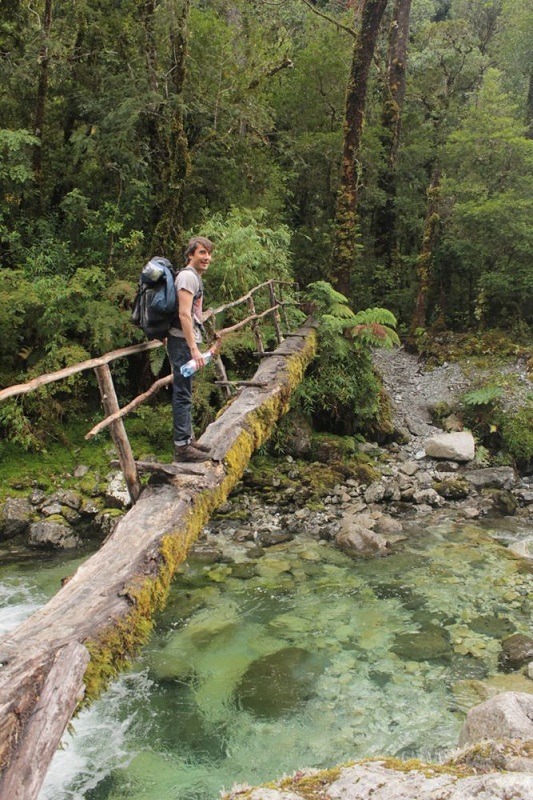 My brother Phil early on at the start of the trek up into the valley negotiates a little part of the river via a natural tree bridge.

Eventually, you are greeted by the most stunning campground, with horses cruising around, fruit trees in abundance, rivers flowing into each other and the beautiful Refugio Cochamó lodge. A zip wire takes you across the river and grants access to an abundance of trails and climbs. Also known as the Chilean Yosemite, the rock climbing around here is amazing. At any point during the day you can look through binoculars at the half dozen or so 1000-meter granite faces that are visible from the campground and see climbers tackling the granite faces. Speak to them later and they’ll always have a good story to tell while you’re sitting around the fire.

We quickly wanted to wash the sweat off from the trek up so we searched out the natural rock slides and were blown away by the size of them. The water pours down onto the slides off the top of a good-sized waterfall and the slopes snake into each other giving you a few different options to throw yourself down depending on how far you are willing to push it in terms of length of ride. The slides empty out into a beautiful, blue plunge pool with no danger of hitting the bottom. 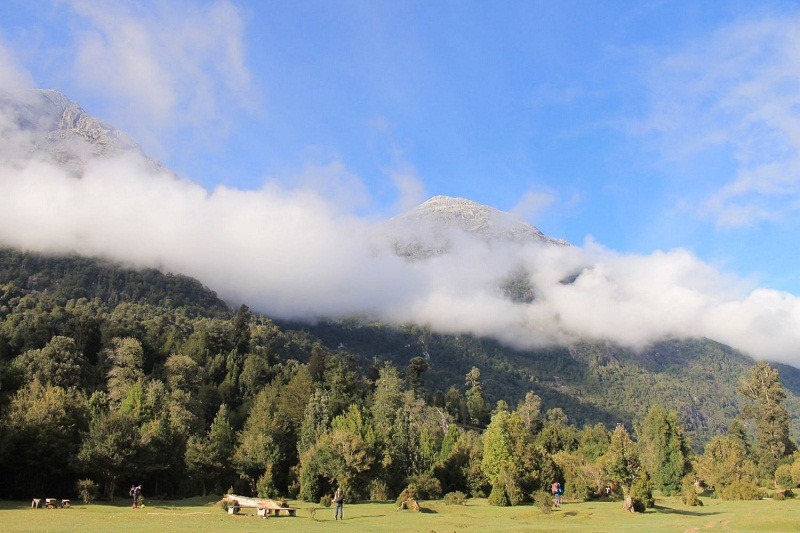 A good view of the camping area from ground level. It gives you some idea of how close the mountains are around you. 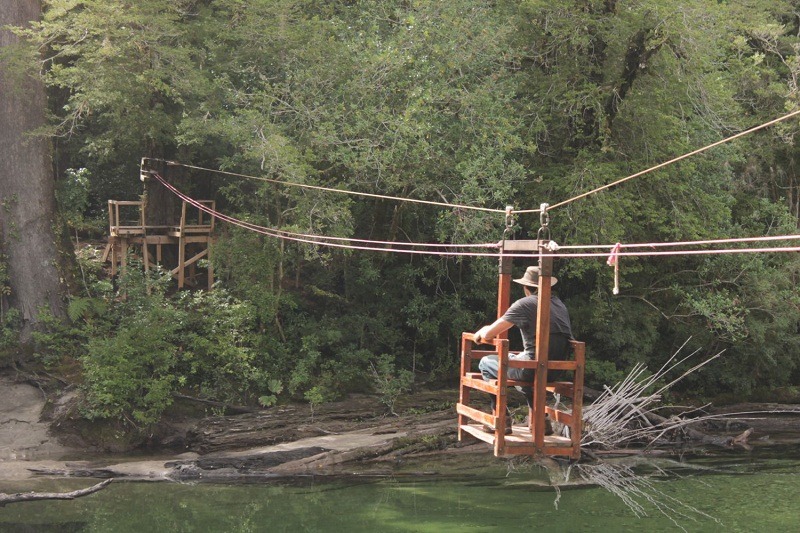 This is my friend Chris Chaffin sending himself out over the river via the zipwire crossing. Once on the other side you gain access to a myriad of tracks, mountains and the refugio. 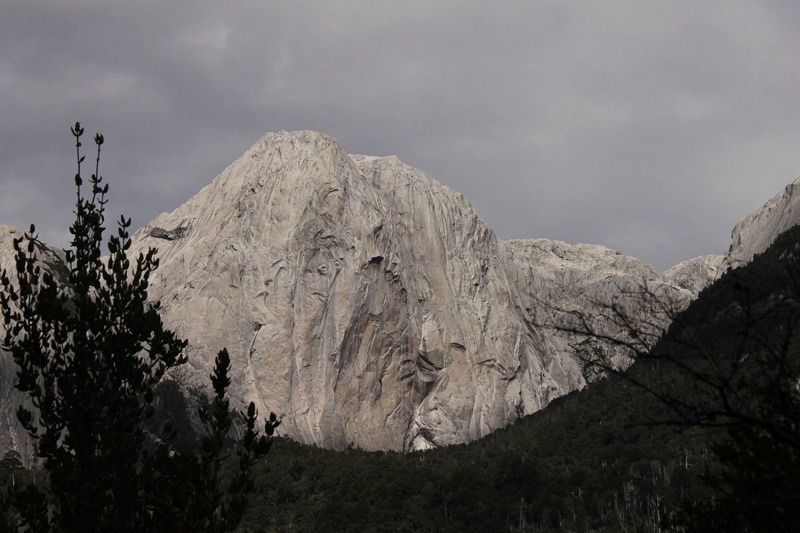 These mountains surround you and dominate the view while you are hanging out in the camping area. 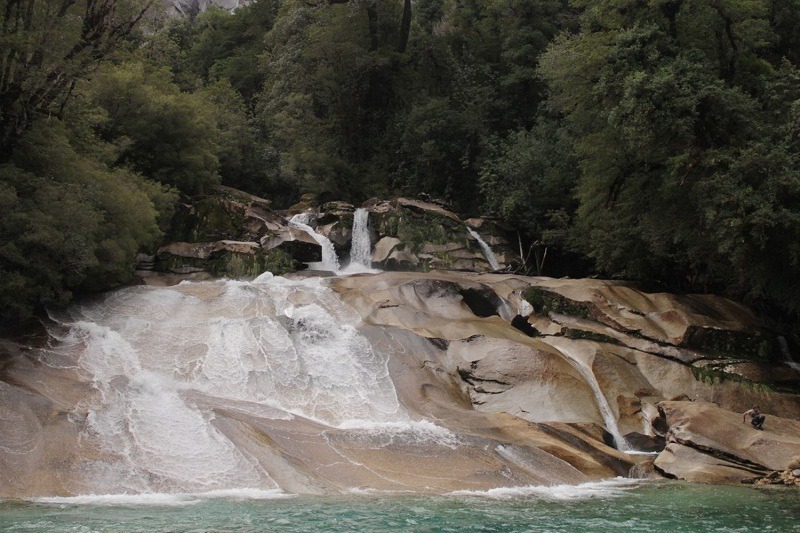 The natural water slides. You can see my brother Phil in the corner of the pic to give you some sort of scale. My favourite route was to drop out of the trees in the left corner of the pic and scream my way down.

On our second day, we woke early and we were blessed with sun early on. A lot of the mountain tops around us were covered in clouds but you could see them burning off quickly so we made the decision to trek up to the top of Arco Iris. The trek quickly gets steep as you make your way up through temperate rainforest—one of only three such remaining forests in the world, full of alerce trees that seem to stretch upwards forever. Before you know it you are way up in the sky peering back down towards the campgrounds and looking across the valley to the granite slopes that dominate the area around you. We were blessed by the arrival of two condors who seemed to be circling us and checking us out through the tops of the trees as we made our way up.

After three hours of intense, steep and sometimes slightly terrifying climbing, we made our way out of the treeline and onto the top of Arco Iris. There we were greeted by the most breathtaking view I have ever experienced. We could see right down to the lake way at the start of the trail and all the way up into the valley that stretches on and on, where there is a trail that is possible to follow all the way into Argentina and is rumoured to have been used by Butch Cassidy and the Sundance Kid when they were hiding out on the ranch many moons ago. The condors stuck around and swooped way above us giving us the impression that we were on their menu. After spending a good couple hours taking in the amazing views we retreated back to camp and some well-earned food cooked over the fire. 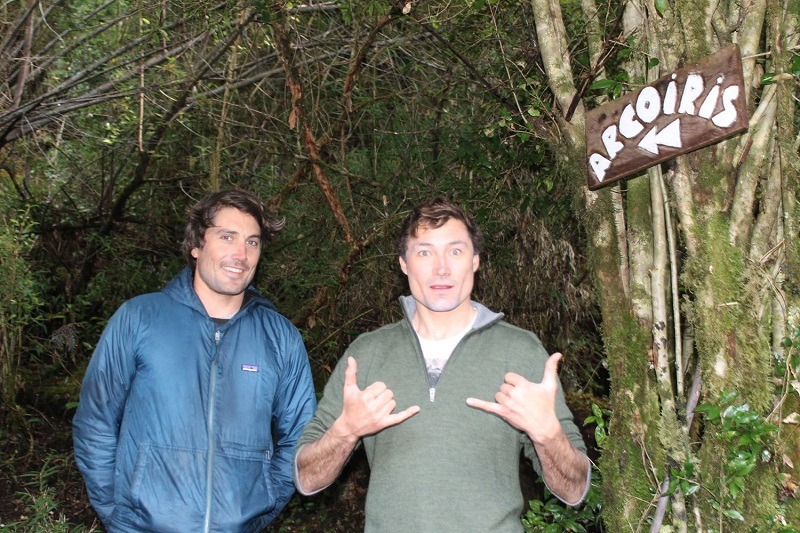 Me and my brother Phil at the start of the trek up to Arco Iris right before it gets really steep. 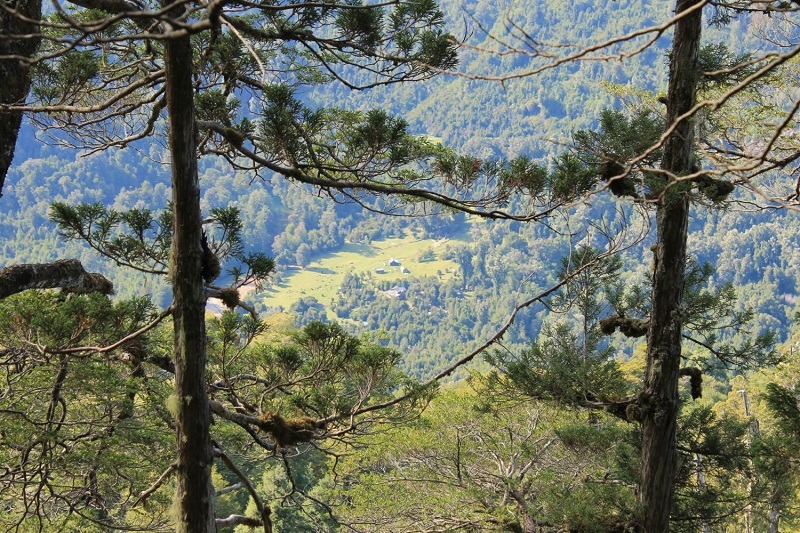 The view of the campsite looking through the alerce trees on the way up to the top of Arco Iris. 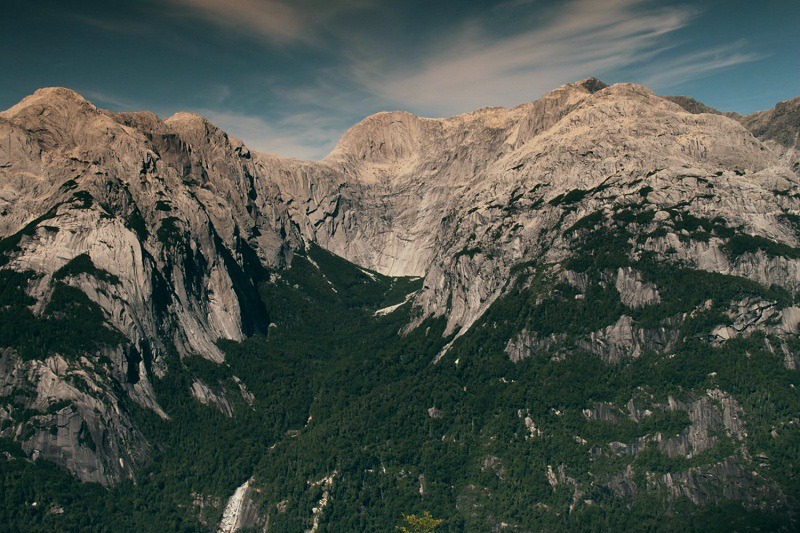 Looking across straight into El Teatro from the top of Arco Iris. 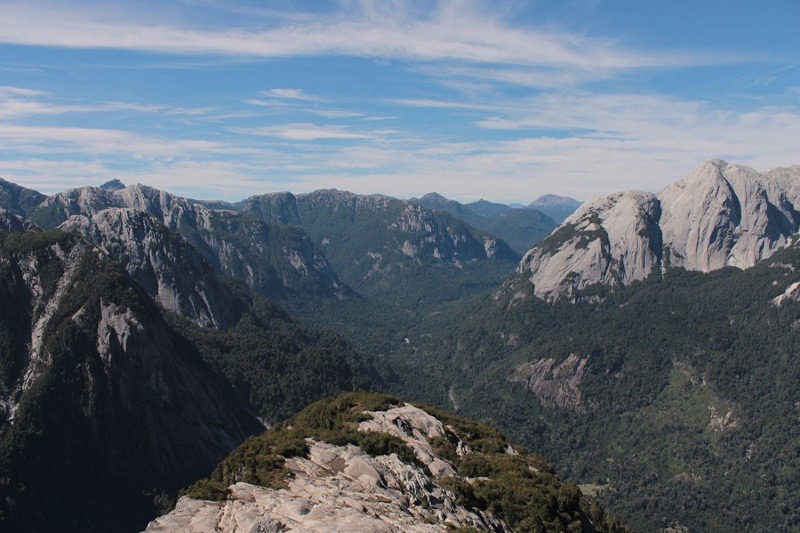 This is the view looking east from the top of Arco Iris. That is the river Cochamó snaking up the valley. It can be followed all the way up into Argentina. 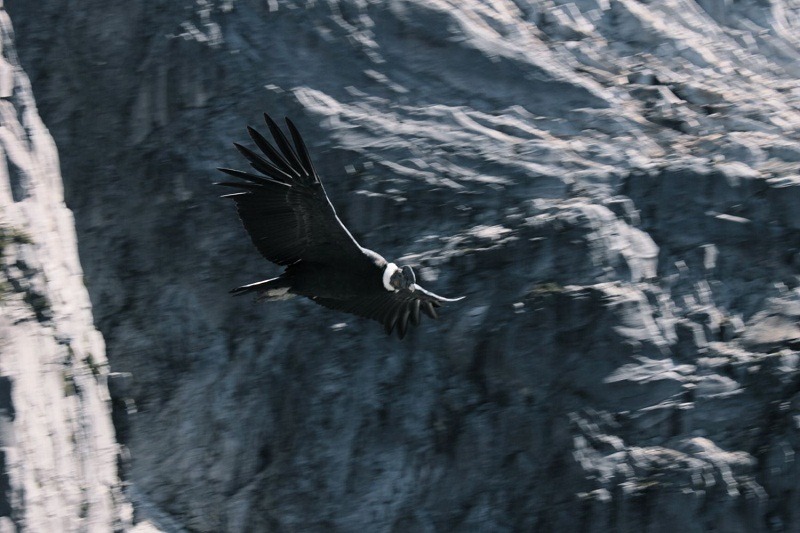 This condor and another treated us to a flying display for about an hour while we were on the top of the mountain. 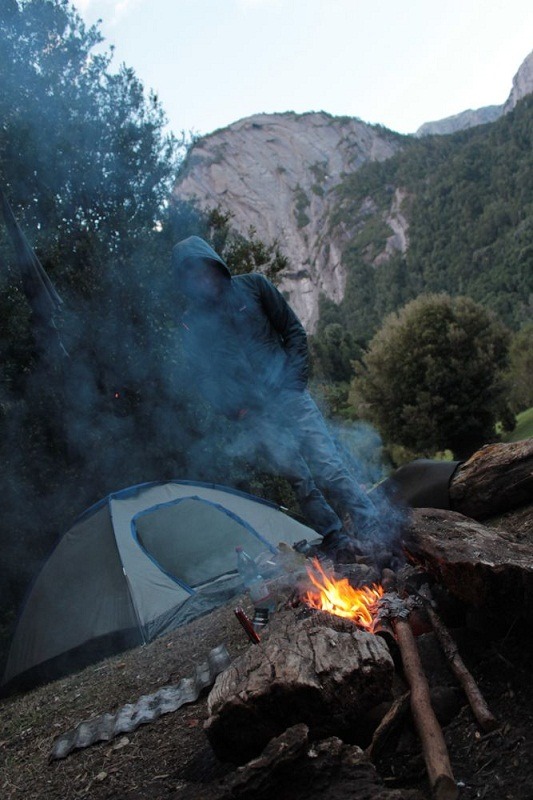 Camp vibes with my brother Phil after a long day of trekking. 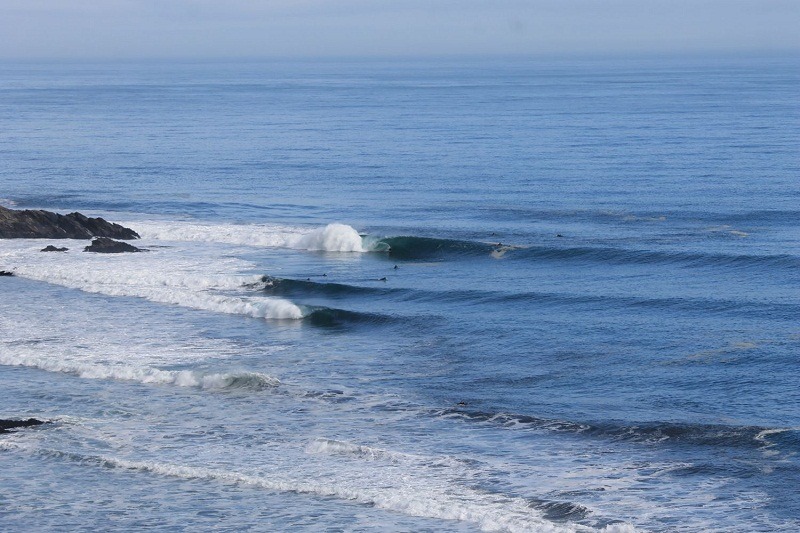 I also got some pretty insane waves while I was in southern Chile. Here a bodyboarder gets absolutely slotted. All photos by Patch Wilson

As with other rivers in Chile, the Cochamo valley is under threat from hydroelectric companies. Currently, local conservation groups are battling the hydroelectric companies to stop them from gaining the water rights that would destroy 25 kilometers of Cochamo River and its tributaries. Along with this, the valley is also under threat from large-scale logging operations in the area, and with this comes the potential proposal of a road up into the valley which would, without a doubt, completely change the feel of the camping area itself and bring with it a whole new set of problems.

The next morning we made the trek back down the trail, but this amazing place has left me wanting to experience more. I am looking forward to returning someday, hopefully sooner rather than later.