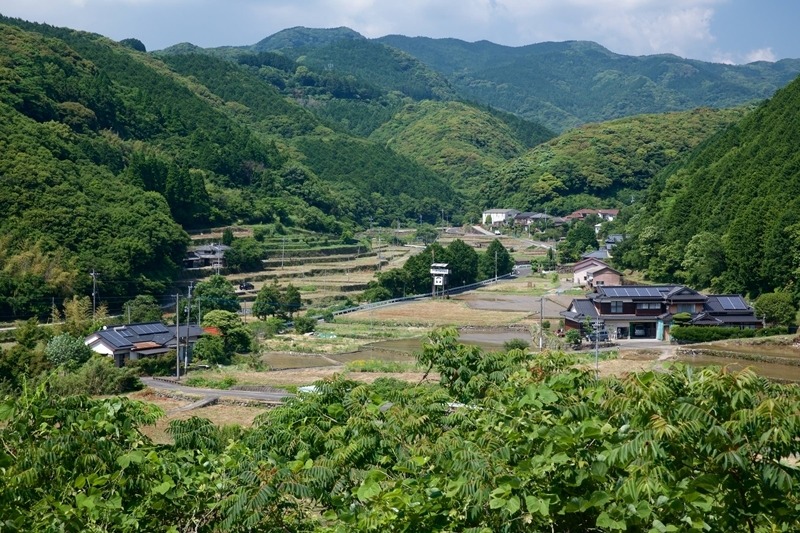 All technology has merits and harmful effects. The same applies to dams that came into existence over 50 years ago. But the detrimental impact brought upon by dams has become increasingly conspicuous in recent years. Because of this, discussions have started to take place in the U.S. regarding the necessity of dams—from economical, environmental and cultural perspectives—with some of these discussions resulting in the actual removal of unnecessary dams. Such stories and movements can be seen in the movie DamNation.

There are currently 2,800 dams in Japan. Structures over 15 meters tall are considered dams in Japan. If we include smaller structures, it is said there are close to 100,000 dams. It is a fact that dams played many significant roles in the economic growth and national prosperity of this country after World War II. However, once we entered the 21st century, the downside of dams became much more obvious – they choke our river ecosystems, destroy fish and wildlife habitats and degrade water quality, while often providing limited benefit as these concrete structures get older and, quite simply, outlast their value. Unfortunately, the administration in Japan has never conducted an objective, scientific evaluation on the necessity of existing dams.

Despite this lack of research, there are over 80 dams being planned right now. Among those, the Ishiki Dam being planned for construction in Nagasaki prefecture’s Kawatana-cho poses serious environmental, economic and human rights concerns. These are issues that we Japanese must take a hard look at.

The plan for Ishiki Dam came about in 1962, over 50 years ago. The proposed construction site is the Ishiki River, a narrow river with only a small amount of water running through it. According to Nagasaki Prefecture and Sasebo City, the business owners of the dam, the objectives of the dam are to secure municipal water for the Sasebo citizens, the next town over from the site, and for flood control of the upper Kawatana River, which is the Ishiki River’s main stream. However, due to the decrease in population and the widespread use of water-saving devices, the need for water is decreasing significantly. One can see from Diagram A that the future water demand estimated by the business owners is far from being scientifically realistic. In addition, the Mayor of Kawatana-cho has publicly stated that he understands that floods and other water-related damage can be circumvented by methods that do not rely on the building of dams. 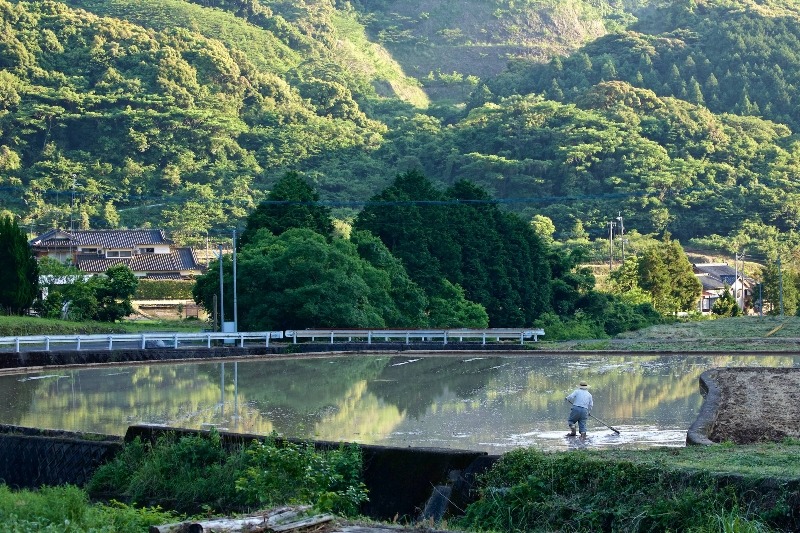 When I first visited this place, I immediately felt like it was the embodiment of what we Japanese call “furusato,” or the place of our origin. Here we see a resident traditionally preparing his rice paddy for planting. Photo: Yoshiaki Murayama 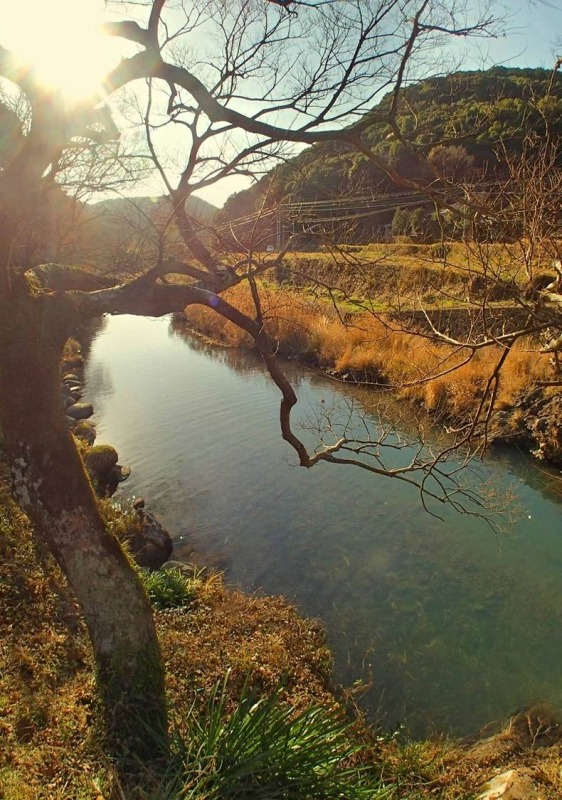 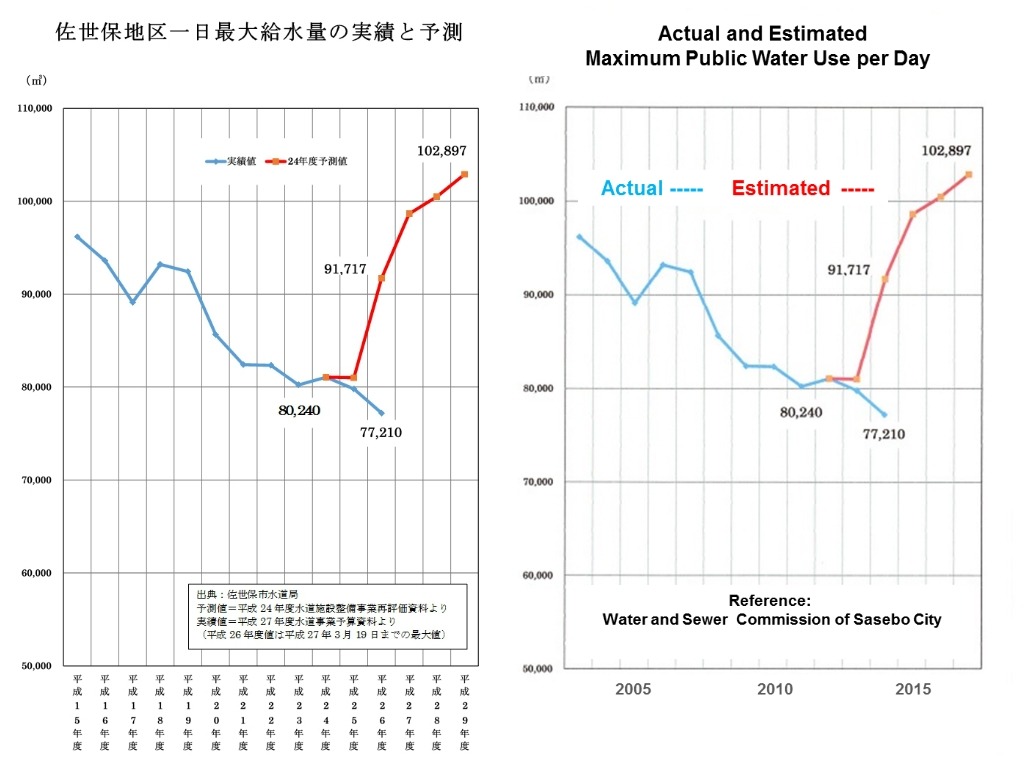 There are three major categories of problems created by building a dam that are clearly unnecessary. The first is the human rights aspect. There are 13 households and 60 people including small children, young married couples and elderlies still living at the proposed construction site. There has never been a case in Japan’s history where a dam was built by using the Land Expropriation Law to take away the residents’ cherished homes, farmlands and ancestral graves through forced expropriation.

The second problem is regarding the environment. The proposed construction site has 138 species of plants and animals that are registered in the prefecture and country’s red data book. If the dam is constructed, there is no doubt the ecosystem will be majorly impacted.

The third issue is economical. If we include the related construction work, it is estimated that 54 billion yen of precious money will be used for this dam. Taxes will not be used to cover all of the costs but if we trace the monetary resources back, the project will use critical money that belongs to the country, the prefecture and the citizens of the city. In addition, the maintenance fees of the dam and surrounding facilities will be added onto the water usage fees paid by the citizens, resulting in a huge burden on the future generations of Sasebo City. 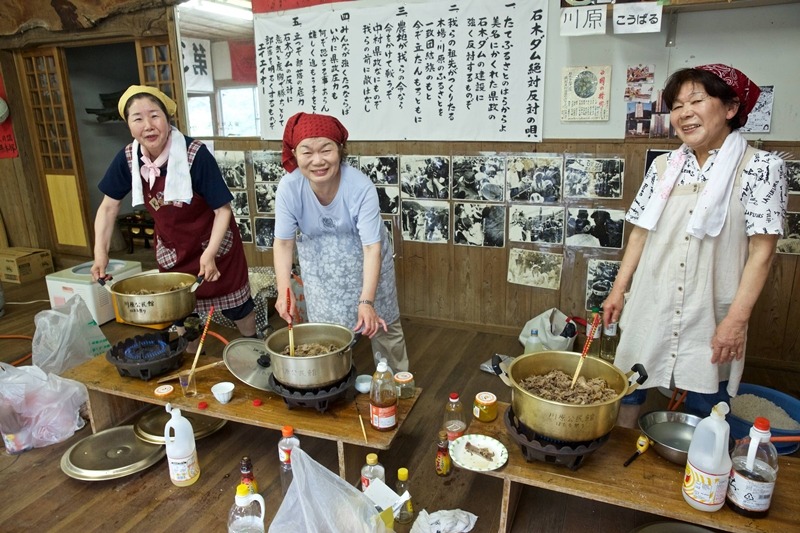 Local mothers work hard to prepare a wild boar dish for the annual “Firefly Festival” held here. Always positive, always hopeful, even if we go to “cheer them up”—imagine if you were going to lose your home to a dam—we often find ourselves being cheered up by these amazing women. Photo: Yoshiaki Murayama 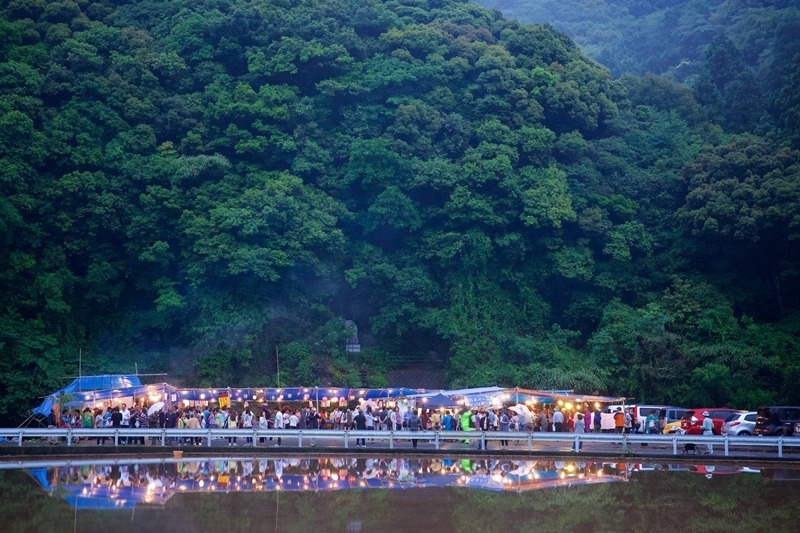 One thousand visitors gathered to celebrate the annual “Firefly Festival.” Happily full from the local delicacies, everyone waits for darkness to settle in. Photo: Yoshiaki Murayama 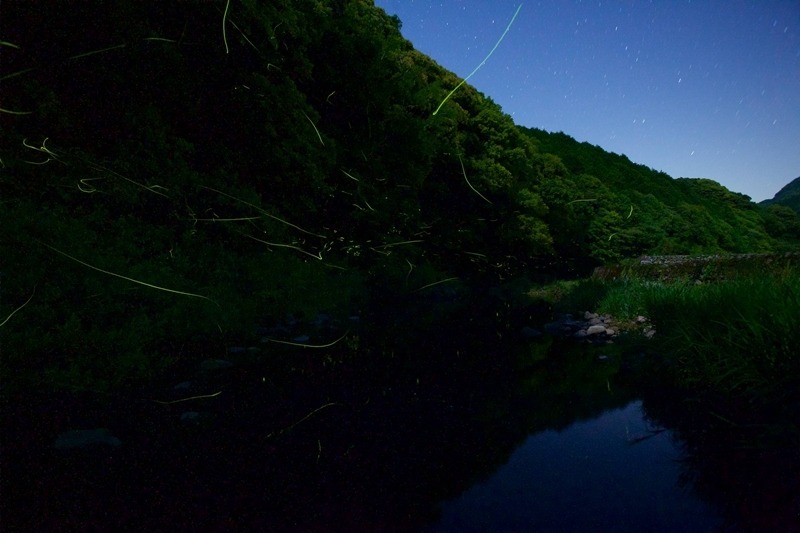 Once the sun sets, fireflies beautifully light up the waters of Ishiki River and the trees of the forest. Born in the city of Tokyo, I literally gasped at the sight. Photo: Yoshiaki Murayama 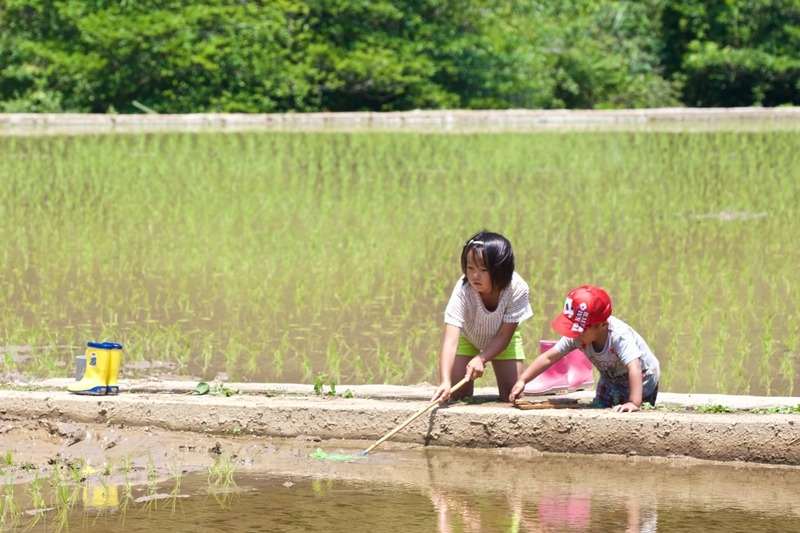 Children who love their birthplace. Catching insects and frogs in the rice paddies is a daily joy. Photo: Yoshiaki Murayama

Based on the above stated facts, we at Patagonia Japan support the movements to stop the construction of the Ishiki Dam and hope to protect both the human rights of the people who live there and the environment.

Lastly, I would like to share with you the speech that one of the landowners who lives on the proposed site made at the press conference we held at the Foreign Correspondents’ Club of Japan on April 6th with the local residents and the union of lawyers who are against the construction of the Ishiki Dam.

“To all those who have gathered here, I hereby wish to express my most sincere gratitude for this press conference opportunity you have created for us. My name is Isamu Ishimaru and I am one of the residents of the area slated for the dam construction. We have suffered for close to half a century with issues pertaining to the dam. It is not an exaggeration to state that our lives have been continuously impacted by the dam problems. I am prepared for this issue to continue from here on, however, I am determined to somehow stop the construction of this dam.

“The area slated for the Ishiki Dam construction is often said to be a place where the beauty of Japan’s nature remains unchanged. The area I live in called Koubaru now boasts a yellow obi of nano hana blossoming alongside the Ishiki River. We have fireflies crossing the skies during the early summer and cosmos blooming in the fall. Thirteen households and 60 residents reside in this modest village, helping each other out like family and protecting the Ishiki River watershed as we live a simple but fulfilling life.

“In reality, Japan’s dam administration is based purely on the concept of building a dam first and foremost, with the validation of the dam’s necessity a mere afterthought. In addition, the problem lies within Japan’s system which continues to ratify this situation. We have been in this very difficult fight against this administration for many, many years.

“Currently, the business owners advocating the dam, which are Nagasaki prefecture and Sasebo city, are proceeding with the process to forcefully take away our land, home and trees by using the Land Expropriation Law. In reality, a portion of the area scheduled to be submerged has a history of being placed under forced expropriation by the Japanese Navy for use as their military supply factories’ evacuation site during the Pacific War (World War II). The compulsory expropriations conducted during the war were implemented by the military regime under the Meiji Constitution. What we are facing now is a totally different situation. My friend brought out the Constitution of Japan’s Article 13 which stipulates basic human rights, informing me that the authorization stipulated in the Constitution takes priority and that a forced land expropriation is an infringement of the Constitution, and has encouraged me to keep going. He explained that under the current democratic constitution of Japan that holds the right to life, liberty and the pursuit of happiness as its fundamental principles, the opposing party cannot ignore Article 13 and carry out a forced land expropriation as if it were nothing. As we collect petitions, many people show their understanding that a forced expropriation must not, by any means be carried out. However, I am most concerned about the reckless direction the dam promoters are taking.

“My rice fields are also targeted as part of the first wave of forced expropriation. I have heard that the judgment on this issue will be reached soon. However, I plan to keep tending my fields even if the decision falls into the opposition’s favor. I have already started to prepare for the cultivation of my fields. If I may sing my own praise, the rice made in Koubaru is very delicious. If it were possible, I wish that I could have all of you taste it, right here. Seeing the beauty of the golden ears of the stalks and eating the safe, comforting rice grown by our own hands are why I feel so very blessed. Japan has prospered since the war but I think these simple things are the ultimate luxuries and true happiness. We must leave these blessings for our children and grandchildren. We must continue to protect these fields.

“Water is a necessity; that I know. However, in this case, there exists no reason to construct a dam much less one that requires forced expropriation. We simply cannot bear to witness our precious birthplace be submerged due to an unnecessary dam.

“I do have the confidence that justice will be served. Yet, I am saddened. Japan’s current government is not logical. The natural world continues to be destroyed. We are forced to stand on dire grounds. We sincerely ask for your support.”

We ask for your understanding and support on this issue. Learn more at the Ishiki River website and then sign the petition at Change.org to have the construction of this unnecessary dam revoked and to put a stop to the forced expropriation of the affected residents. 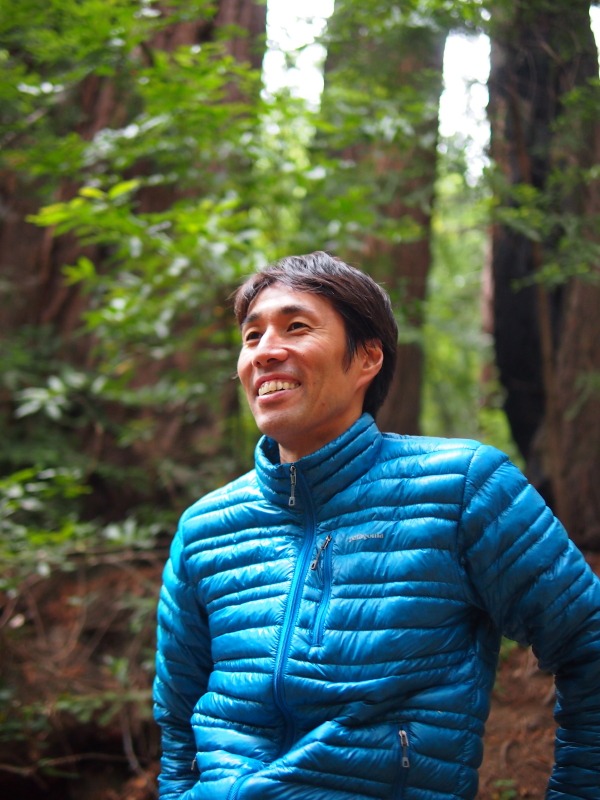 Takayuki Tsujii is the General Manager of Patagonia Japan.