Most of our photo-centric "Picture Story" posts have been about climbing. Today, the fishing guys get in on the action with an encouraging report from one of eastern Canada's iconic salmon streams, and a family fishing operation that depends on the health of the river's fish populations: – Ed 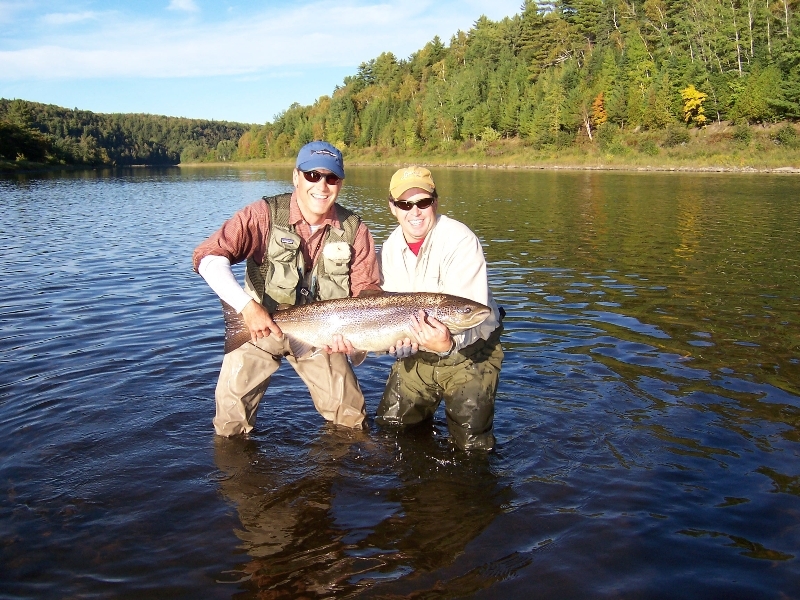 Live Release of Atlantic salmon is the best practice the Wilson family could have adopted  for their sporting camps on the Miramichi River. Years of overfishing, dams and habitat destruction all have taken a toll until some years back when ASF and NASF salmon groups came in with plans for passage, buying out commercial nets, etc. After years of hard work, good numbers of fish are once again coming into the system.

Pictured here is Bill Taylor, president  of the Atlantic Salmon Federation releasing a huge hen salmon that Jake MacDonald hooked, and after a wild twenty minutes managed to land. It began as normal as any other fish until the first jump revealed a monster of a salmon (Jake's first ever). Ten minutes in, Jake announces that he thinks he lost it, and when he tried to reel-up we discovered the line was around a big rock on the far side of the  river.

Jake was fighting the fish from the canoe so I told him to keep a tight line as we poled the boat over to the rock, just in case the big girl was still hooked up. Sure enough, as I drifted closer she ripped clear and the fight was on again. Another ten minutes and Bill managed to slide the big salar into a landing net. It is amazing how such a big fish can be landed after all that on such a small #8 hook. Guide Keith Wilson is all smiles as the two put this beautiful salmon back in the river to swim another day. Live release has been a major conservation tool at Wilson's since 1983 and success is evident today as the camp broke records with the number of fish caught in 2011. Ernest (EJ) Long has been guiding at Wilson's for nearly 48 years and he credits the ASF with the best fishing he has experienced on the Miramichi to date. There is no doubt that Live-Release angling is working for the Miramichi River. – Keith Wilson, of Wilson's Sporting Camps