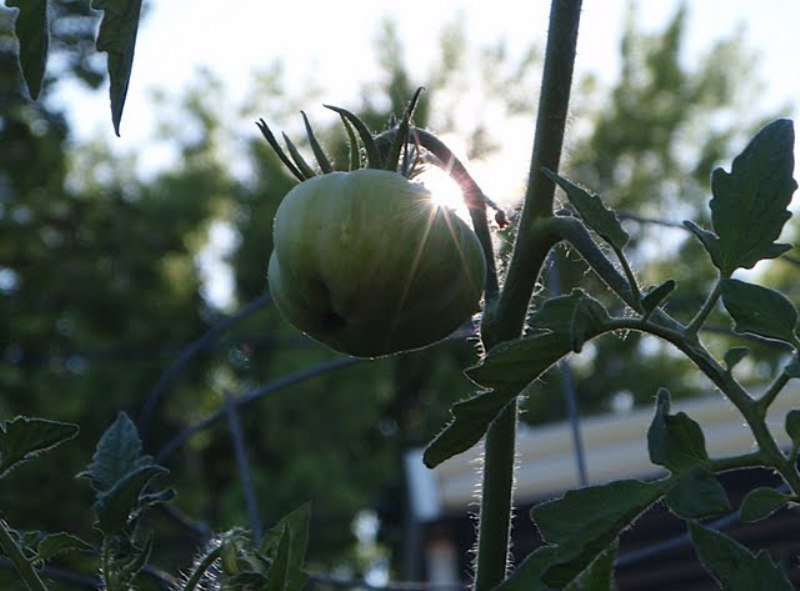 Have you ever tried to grow zucchini? I haven’t. I’m ayoungest child, and a fortunate side effect of that is a tendency to learn fromothers’ mistakes. I would watch my siblings get in trouble for something and makea mental note of what not to do. That’s why I’ve shied away from zucchini. I’veseen too often the near-mad glaze that comes over the face of well-meaningfriends who’ve grown an average crop of it. I’ve stood back in silent awe asthey thrust friendship offerings in the form of grocery sacks full of the stuff at swornenemies. I’ve shared meals with these crazed folks, where la courgette shows up in multipleforms—each version seasoned liberally with bitter resignation—a clue that thisdinner wasn’t a social occasion but a collaborative effort to dispatch massivequantities of the unreasonably prolific vegetable.

Having not attempted to grow zucchini, I haven’t learned one of the manyvaluable lessons it has to teach, chief among them is the blessedinconvenience of abundance. That's why I said yes when a friend asked me if Iwanted some tomatoes for sauce-making. She was wearing sunglasses. It was atactical maneuver, I now realize. Those glasses were designed to hide hermad-zucchini eyes, the ones screaming “Please! Take my tomatoes! They’ve takenover my house but won’t pay my mortgage! I can’t find my countertops and thedog is missing!”

I walked away from that encounter 40lbs heavier. And withno idea what I’d gotten myself into.

Turns out, what I got myself into is something many of usused to be quite familiar with, the idea of eating vegetables in season. It's onethat has—alarmingly—become down-right old-fashioned. But it’s exactly thisquaintness, this each-in-its-season Ness, this slowness that’s become therallying cry of the increasingly popular Slow Food movement.

For the majority of Americans born before, say, 1980,July was the month when you could look forward to that first tree-ripened, perfectlysucculent peach, or to the first deep red slice of a garden-grown tomato. It’sthis forced patience that, in part, was responsible for the richer flavors weremember tasting in the fruits of our childhood. It’s one of Slow Food’s core beliefs that we have the power to livewithin the season, and that by letting the food we desire—and not our desirefor food—set the pace of our consumption, we can enjoy healthier, high qualityfoods whose production is much easier on the environment.

It could be argued that Slow Food exists to remind us ofthe common sense approach we used to take toward food. Many of this blog’sreaders may already be familiar with Slow Food, but for those who aren’t, themovement got started in Italy, its seeds planted in wide-spread opposition tothe opening of a McDonald’s in Rome. But the roots of the movement areinternational, and have been nourished by an expanding web of communitiesseeking to, as their website states, “link the pleasure of food with acommitment to community and the environment.” Key to the movement, are itscommitments to food that is Good, Clean, and Fair. From the Slow Food Website:

Good:
The word good can mean a lot of things to a lot ofpeople. For Slow Food, the idea of good means enjoying delicious food createdwith care from healthy plants and animals. The pleasures of good food can alsohelp to build community and celebrate culture and regional diversity.

Clean:
When we talk about clean food, we are talking aboutnutritious food that is as good for the planet as it is for our bodies. It isgrown and harvested with methods that have a positive impact on our localecosystems and promotes biodiversity.

Fair:
We believe that food is a universal right. Food that isfair should be accessible to all, regardless of income, and produced by peoplewho are treated with dignity and justly compensated for their labor. 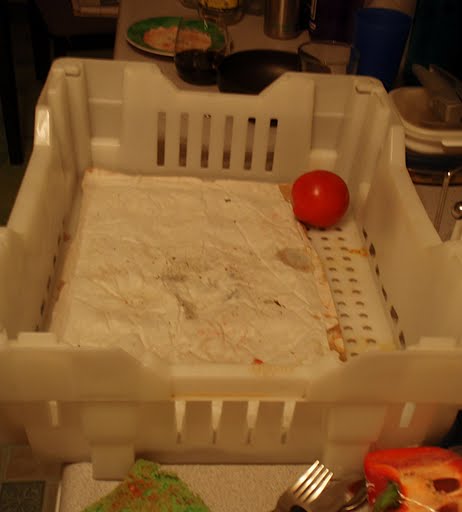 I had Slow Food in mind as I said “yes” to those 40 lbsof tomatoes. I was saying yes to the season, yes to the bounty, yes to a giftwe used to only receive for a short time every year. Ironically, I was alsosaying a big “NO” to attending one of the first meetings of our new local SlowFood Chapter.

It’s a great highlight to know this welcome addition hasbeen made to Reno’s food community. Hard-working folks have been pulling somebeautiful food from Nevada’s desert dust for years now, and it’s a good thingto know something is now in place to help put them in touch with people who areeager to consume their goods.

I’ve been trying to Slow my Food for years, andbelieve I’m supposed to listen close to the voices of the season. Some of themore moldy ones on my kitchen countertop were crying out for a shave. It wasSlow Food, or the tomatoes.

I knelt at the altar of abundance that night.  Fruit, by precious red fruit, I slowly turnedmy friend’s gift into a sauce that will be feeding my lovely sweetie and Iduring those dark months when “fresh” tomatoes are nothing more than pale,insipid imports at the local grocery.

***
The following is offered for the sake of those who want to say "yes!" to a large offering of seasonal goodness. I'm no cook so take the advice, such as it is, with a grain of salt. . . . And a glass of wine. Here’s a rough outline(read: “recipe” with the quote marks vehemently scratched in the air bytomato-stained fingers) with a total finished quantity of 3 gallons. Make sureyou have a big stock pot. And a place to put all this stuff when you’redone:

1) Fill a sink with ice water

2) Bring a large pot of water to a boil

3) Drop tomatoes in boiling water for about 1 minute, and thendrop in ice water

4) Pull skin off and a) compost; b) use in some tastydish; 3) give them to your neighbor’s 3 year old to throw around inside theirhouse. 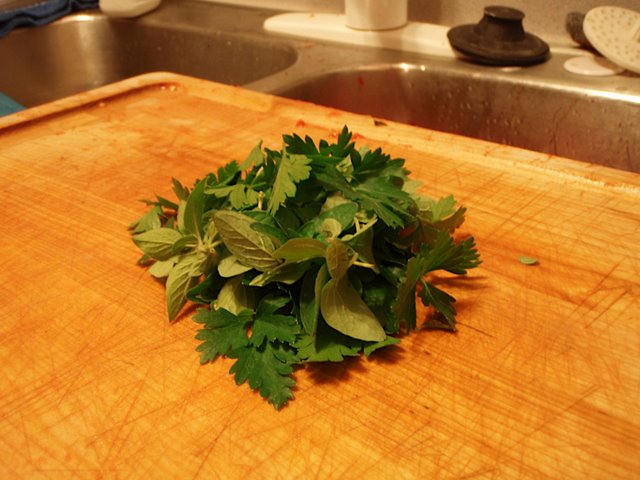 – Pour a bunch of olive oil in the bottom of the pan.What the heck, a little butter, too

– Toss in 3 heads of pressed or minced garlic, Add 2 or 3onions, Brown the whole business

– Pour in a bottle of wine, preferably red. I used abottle of Malbec that had no business being drunk out of a glass. Ick! But itwas a righteous addition to the sauce. NOTE: If you’re drinking wine at the time you’re doing this, you don’thave to pay attention to when you add the wine, or how much goes in at whattime . . . whatever. If you’re NOT drinking while cooking, then try to findsome instruction about reducing wine when making a sauce, and do things likeyou’re supposed to.

– Start chopping up the skinned tomatoes and droppingthem. 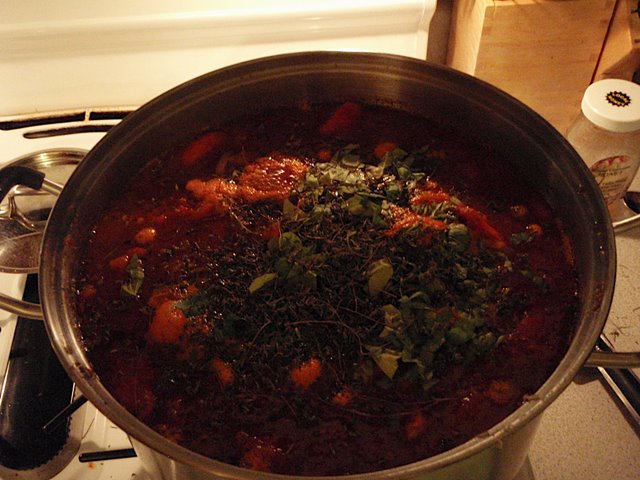 – Ooops . . . A little typo there, that I'll just leave in place. That's the wine talking for ya. DON’T just dropthe tomatoes. Drop them INTO the stock pot, where they’ll cook better.

– By this time, your kitchen’s a wreck, it’s hotter thanhell, and, if you’re drinking, then you’ve stopped paying close attention todetails and started singing very loudly. This means it’s time to add more stuffto your sauce. Raid the fridge for leftover vegetables that might taste good.Chop them and add them. To the pot. Of sauce. That's hopefully on the stove.

– Don’t forget the fresh herbs! Fresh is where it’s at.Stick with the staples (oregano, basil, thyme, you know) Keep in mind thequantities should be sufficient for 3 gallons of sugo (i.e. 5 handfuls of fresh basil leaves, at least 4 full 6” springsof oregano, etc.)

– A few other things that I believe ended up in thisbatch and seem to have turned out well: balsamic vinegar (1/2 cup?); freshcultured whey (left-over from making chevre); a stick of butter, crystallizedcane juice (approx ¼ cup)

[Top, the stack of tomato skins as it starts to look when it's big enough to reach eye level. Middle left, The bin in which the gift of tomatoes was offered, overflowing. Middle right, one of the many tasty herbal additions – here, we've got a big pile of fresh oregano and flat-leaf parsley fresh from the garden. Bottom, 5 hours later and it's time for bed. Tip: don't start your project @ 8 on a school night!. Photos: localcrew]