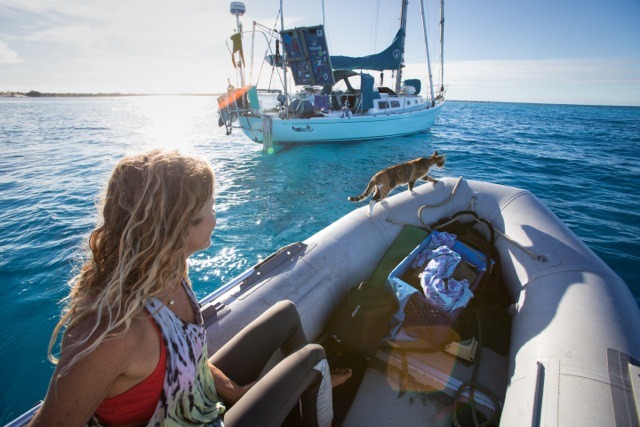 I’ve had a few pets on Swell over the last nine years—most of them made their way aboard on their own. I don’t mind the geckos that often show up in a banana stock. They hide, so I rarely get to see them, but they are harmless and make cute coughing noises in the evening. I’ve hosted a wide variety of ants—from teeny fuzzy black ones to enormous shiny red ones. A roving wasp colony lives in my spinnaker pole from time to time, but we tend to give each other our space. Once a cricket turned up out of nowhere. I never saw him, but I adored his evening serenades until the day they were no more. While I was away on a trip to California, a newlywed rat couple from the boatyard where Swell was hauled moved aboard and raised four handsome rat babies who explored, chewed and pooped inside Swell from bow to stern. Their story had a rather gruesome ending … same song for the prolific cockroach family that sailed with me to Kiribati.

Amelia was different. I’m not sure whether I found her or she found me that fateful afternoon in November 2013, but it felt fairly clear that we were meant to be together. She was a skinny little adolescent then—about six months old and hungry for food and love. Something about her commanding lioness air and carefree bravado made me want to give her both. I can’t estimate the innumerable forlorn cats and dogs I’ve longed to adopt over my many years of travel, but it never seemed fair to drag them into my nomadic, non-routine lifestyle. With my captain’s duties, I wasn’t sure I had time to care properly for a pet. I don’t exactly know what got into me that day; I only remember it being unbearable to leave without her. I called her Amelia, after the revered Miss Earhart, sensing right away that we shared a thirst for adventure.

Life on a slippery, 40’ by 11’ hunk of fiberglass surrounded by ocean was a radical contrast to the lonesome jungle living Amelia had known at the empty mountain mansion where we met. The new backdrop didn’t seem to faze her for long. She scoured every nook and locker of Swell daily for any living thing to torment. She resorted to ambushing flies, although she much despised their buzzing antics. She nuzzled her food bowl, watched sunsets from atop the dodger and spent twilight dawns on the bow eyeing our fish neighbors. Her high-wire, over-the-water acrobatics soon led to a few overboard incidents. She quickly learned to dread the sea. Despite her distaste for swimming, she was amazingly good at it. She’d claw her way up my rubber dinghy to get back on board. I worried she might fall over when I was away, so I devised a cat ladder made from a long strip of old towel that hung over the side and dangled into the sea. I came back from surfing one morning to find her madly preening her wet fur; she’d obviously made good use of that ladder. 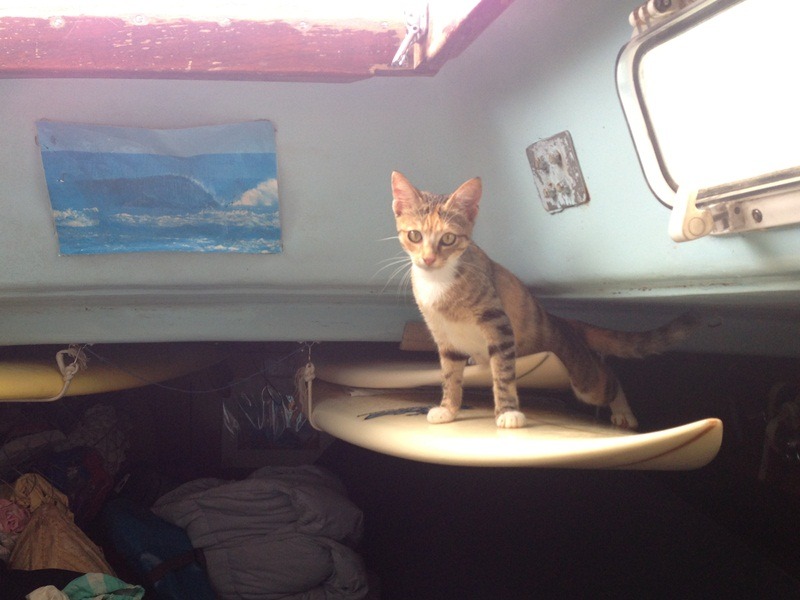 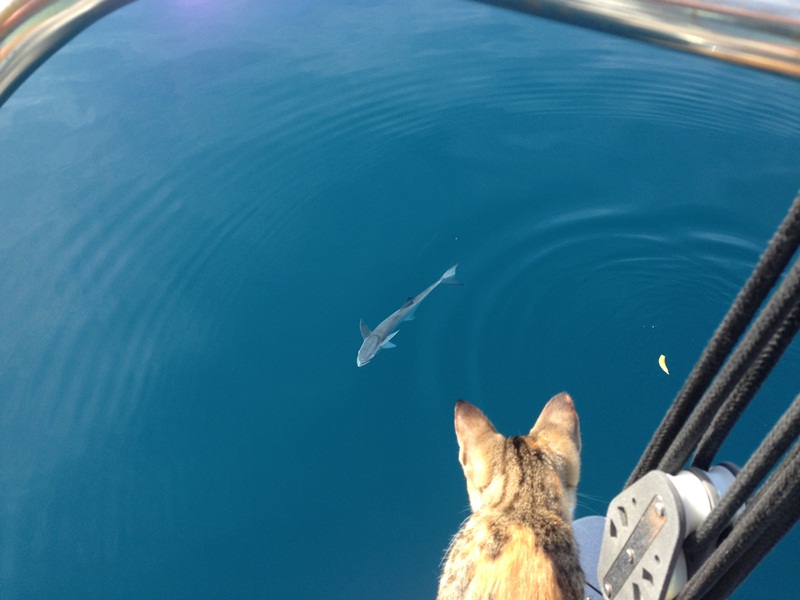 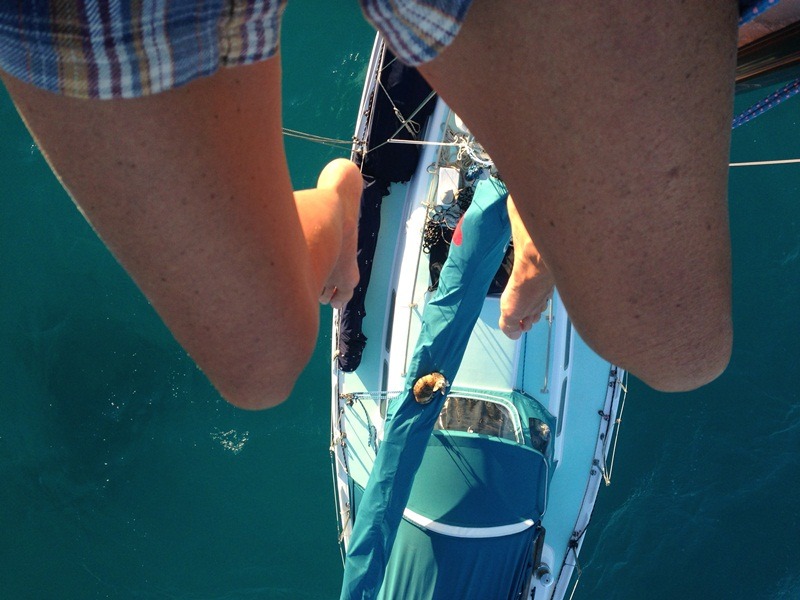 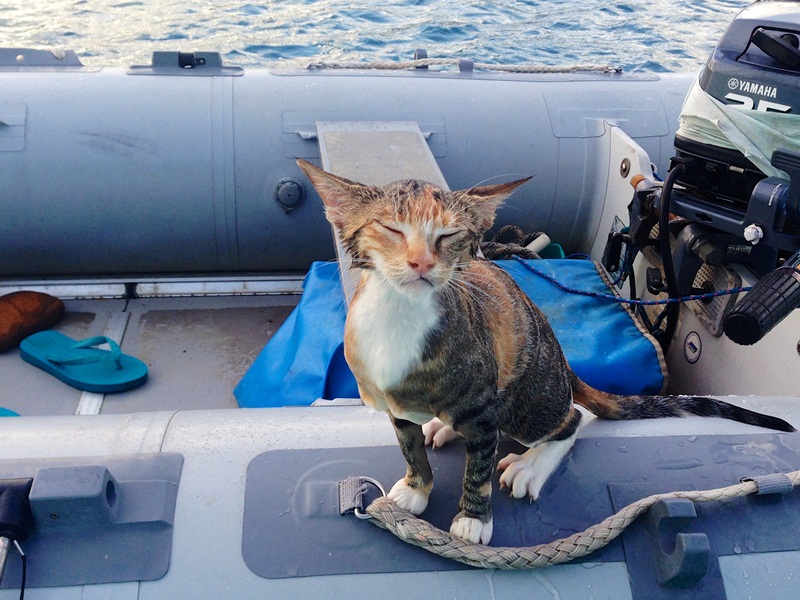 Amelia liked to run the show and, whenever possible, I let her. She always had a wily, determined look—as if the world was out to get her, but she was going to get it first. She was the star of her own mystery film—a sexy, heartless secret agent always on a mission. She constantly stalked me from above the sunshade as I came out of the cabin and would pounce viciously on my head or fly at me from across the cabin out of nowhere. She’d stalk fish over the side and birds flying above. I built her a cat tree from a yoga mat wrapped around the mast, tied strings everywhere, made her a fishing platform, and often brought home fresh palm fronds to whip around and let her chase. She did enjoy a bit of luxury in her down time, sprawling indulgently across her cushy bed under the dodger. On visits to various fancy yachts—after a thorough search for anything to kill—she would always post herself assertively smack in the middle of the scene. But, all in all, Amelia the Tropicat had a one-track mind—it was all about the hunt. 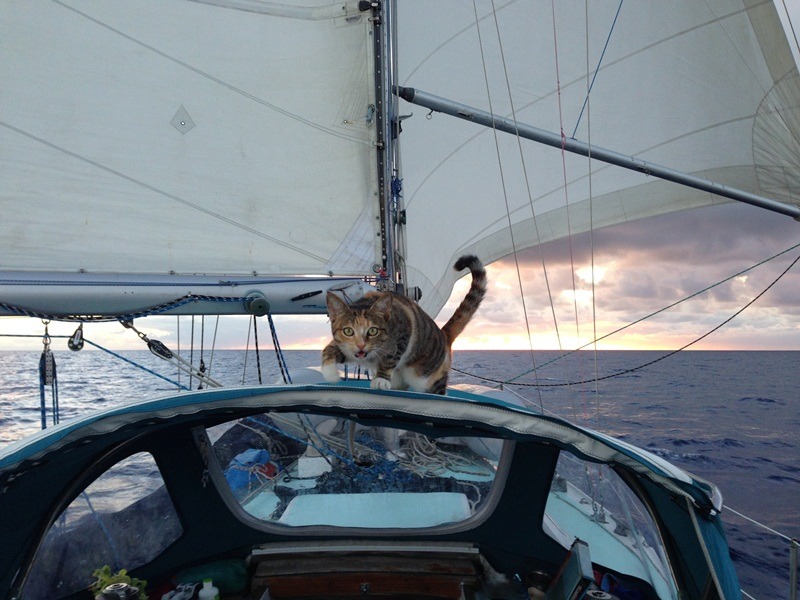 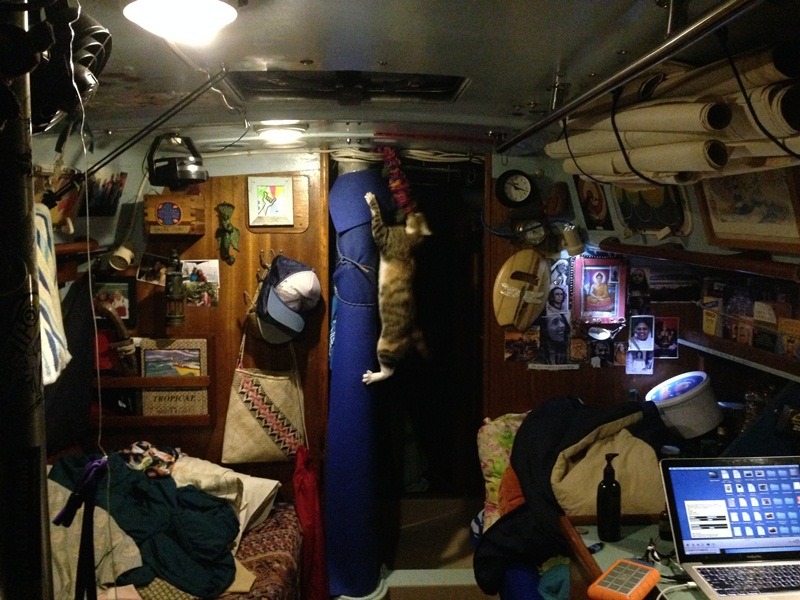 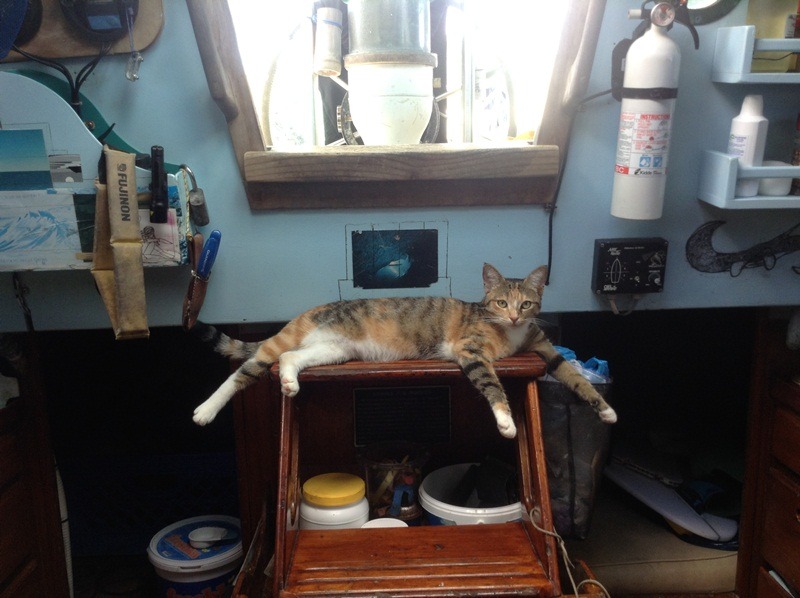 I knew she missed climbing trees and bounding through tall grasses, so I started bringing her ashore on beach walks and jungle hikes. I figured if she disliked life afloat, she’d just run away, but by and by she followed. We found a flat, shady spot on the mountain and returned often in the late afternoons so she could play in the forest while I practiced yoga. She came with me to parties, outdoor restaurants and friends’ houses. She never enjoyed rides in the dinghy, canoe, car or motor scooter, but she was usually happy to arrive and discover new turf. After a few months of these sorts of adventures, she seemed to understand the routine, and she’d climb in and out of the dinghy on her own.

I’m sure she had psychic powers, too. She knew exactly which drawer or locker I needed to open before I got near it. She’d casually make her way there in time to plop herself boldly in front it just before I arrived, then stare off coolly, like she was daydreaming. I was constantly obligated to coax or nudge her, and she’d begrudgingly get out of the way. 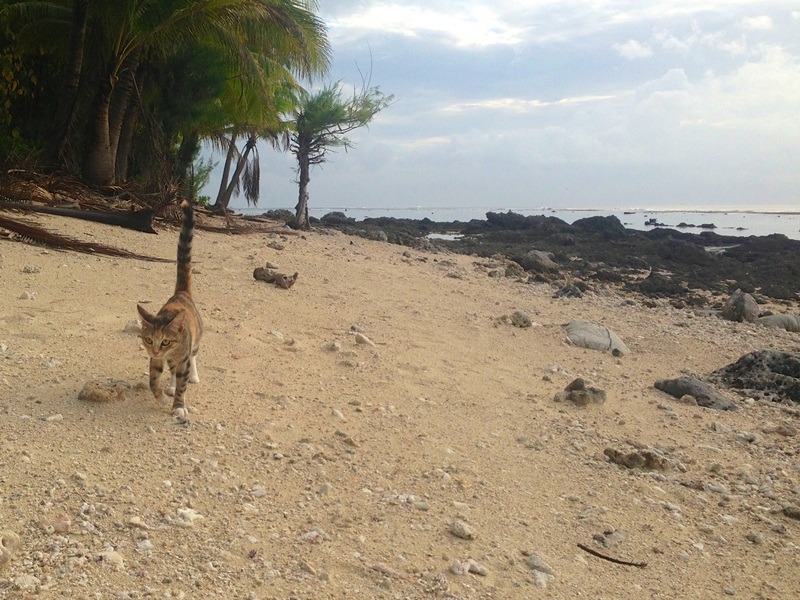 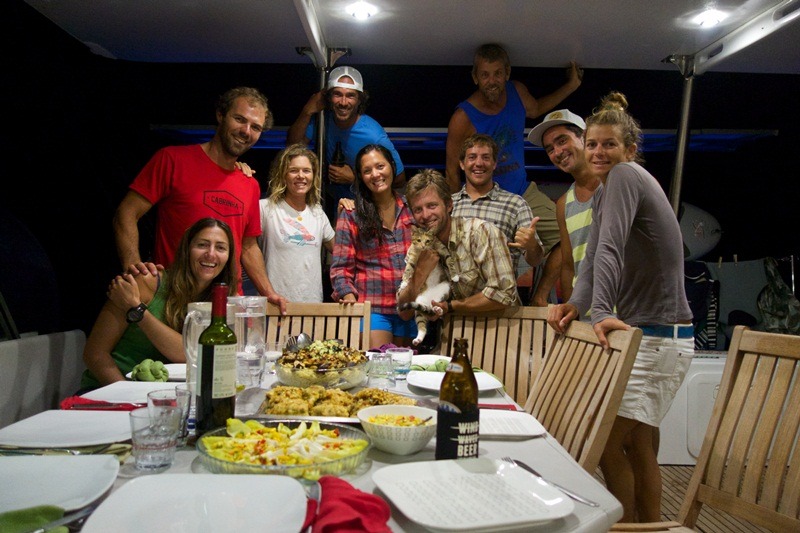 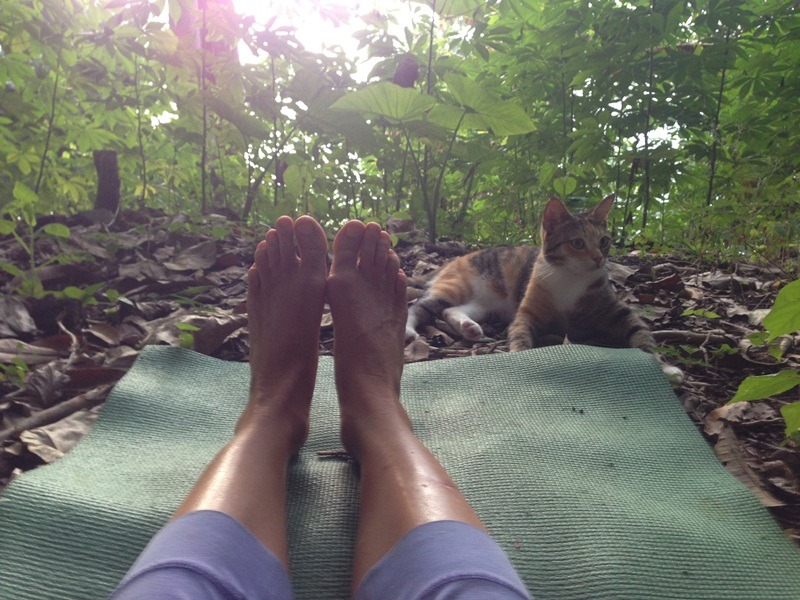 She charmed most and ignored some. Either she hated being coddled and kissed or was too proud to show it. She’d let me snuggle her for a few fleeting moments, then I’d feel her body tense up and she’d become desperate for a way to escape. I understood … a warrior princess/secret agent couldn’t let her guard down for long. Now and then she’d curl up on me, but it was always on her time. We reached a silent understanding about physical affection: She got an endless supply of food and as much love, petting and ear scratching as she wanted, when she wanted it, so long as she tolerated brief barrages of kisses and caresses when I needed to give them to her. We understood each other. We both needed freedom and love, we both got seasick, and we both loved challenge and exploration.

She taught me how to wait patiently for something you want (something to kill in her case) and the importance of carrying oneself as lioness: distinguished and unfazed, no matter the conditions or company. She could be vicious. Dogs feared her. I didn’t trust her around babies. I was constantly marred with her scratches. Once she killed a seabird about her size while I was ashore. The poor unsuspecting fellow had landed aboard Swell for a brief rest, only to be stalked, hauled down into the cabin and massacred. Sigh. In fact, I’m sure that if she were big enough, she would have killed me too. I know she loved me and might have regretted it afterward, but her merciless nature was just too strong. 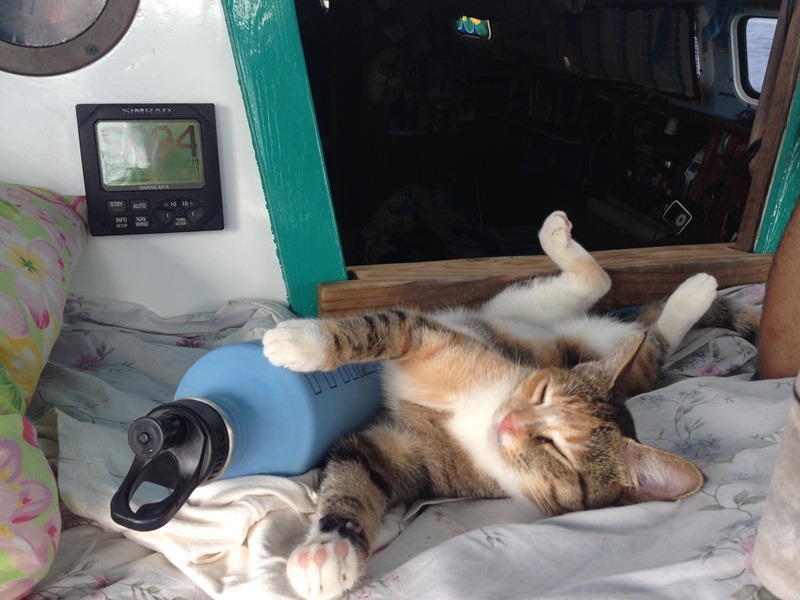 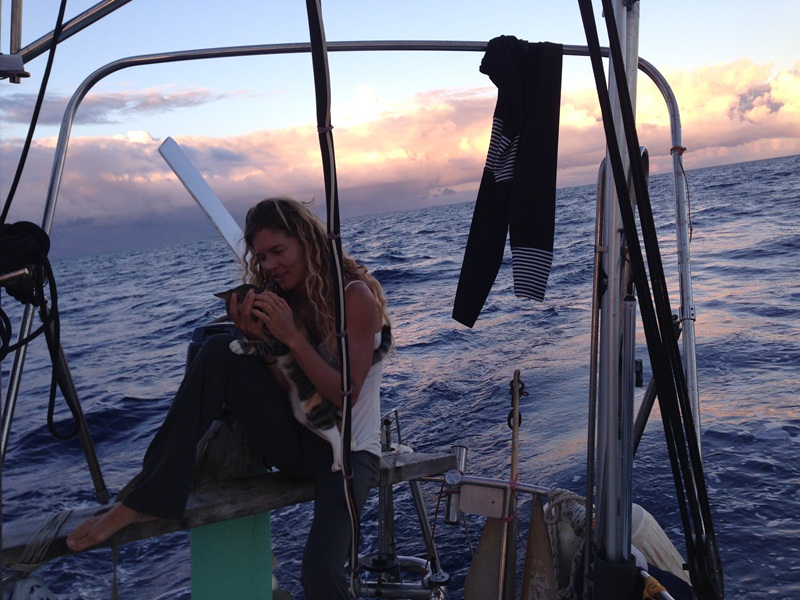 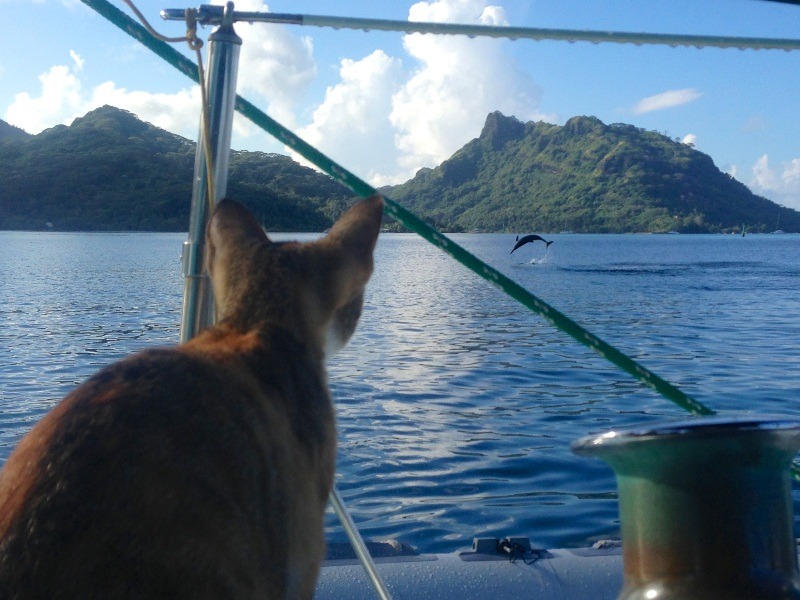 On January 31, 2015, Tropicat and I were invited on an island surf excursion. We found ourselves on the back of a stranger’s canoe, headed for an islet about 300 yards away. She slipped off the shiny angled canoe twice on the way. I quickly scooped her aboard both times, but I knew she was horrified. I don’t think it helped that I found it impossible not to giggle at her drenched, rat-like body. We safely reached the other side, where she followed me out a palm-lined jungle trail to the surf spot. I dropped my bag and spread out my pareo so she’d have a temporary home, then paddled out for a quick surf. When I returned, Amelia was gone. I didn’t want the others to wait around, so they headed home while I tromped around the tiny islet, calling her name and regretting laughing at her earlier. She never appeared.

That afternoon, a stiff west wind was mounting. I grew worried about Swell anchored in a fairly exposed bay. There was a cute little bed-and-breakfast on the island, so I figured Amelia would be happy chasing rats and lizards for the night and could go see the people there if she was lonely or hungry.

I went back the next day and numerous times since. I camped out where she was last seen, left piles of cat food and fish—and even my stinky clothes—to lure her. I called a pet psychic. Amelia still has not surfaced. She is either enjoying endless games of chasing lizards, rats and crabs, or another visitor might have picked her up. Her fate remains a mystery, but I can only hope she loves her newfound paradise or has a new caretaker. I haven’t been able to put away the reminders of her endlessly entertaining company. The litter box is empty. Her toys lie still and lifeless scattered about. I miss her dearly. 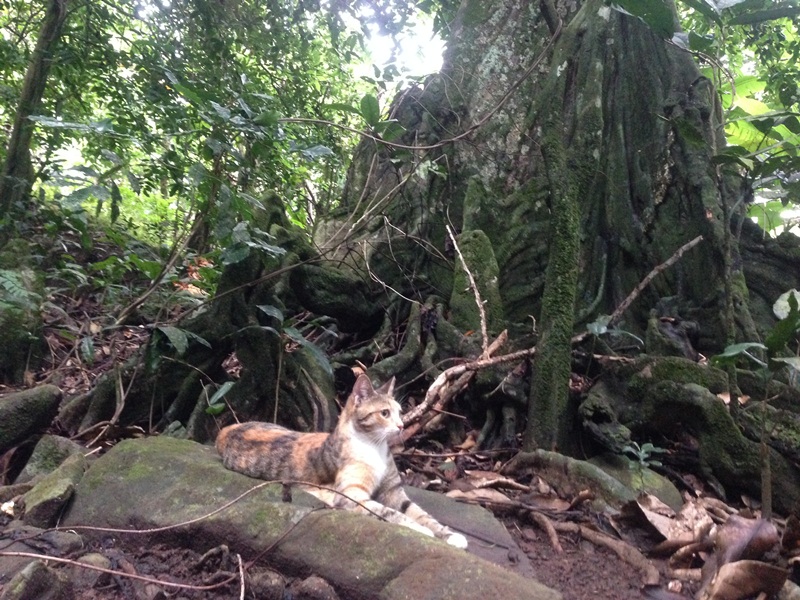 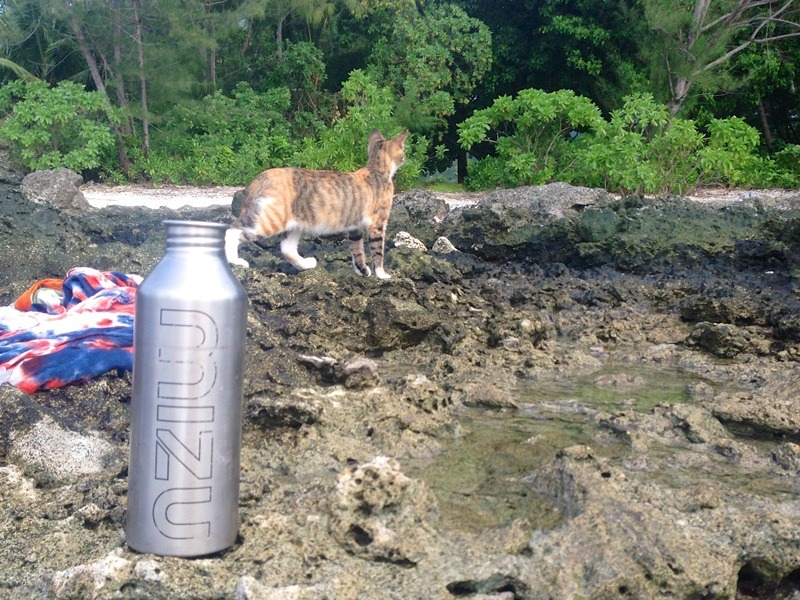 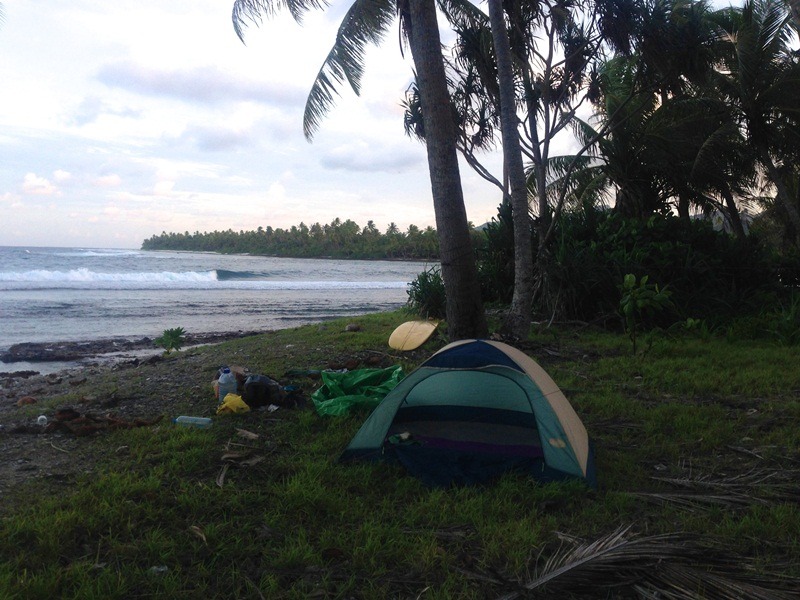 Part of me is stunned by the loss I feel without my beloved little companion, but another part of me knows that, like me, she needs to feel free. I never owned her; we chose each other. I did my best to keep her happy during her spell afloat, but as the rainy season and my book project kept us more and more often aboard Swell over the last month or so, I had noticed a far-off look of longing and boredom in her eyes. Maybe the string of calamities that happened at the motu that day was meant to be? As much as I badly want to see her again, there’s a part of me that knows she’s likely happier in her new land life.

Her untamable spirit will always stay with me. And I believe this about true love: You want for the other what they desire for themselves. So be free, Amelia the Tropicat. I wish you endless new adventures, a full belly, loving new hands to caress you and a life of the nonstop ever-thrilling hunt that keeps the fire blazing in your feline goddess heart. 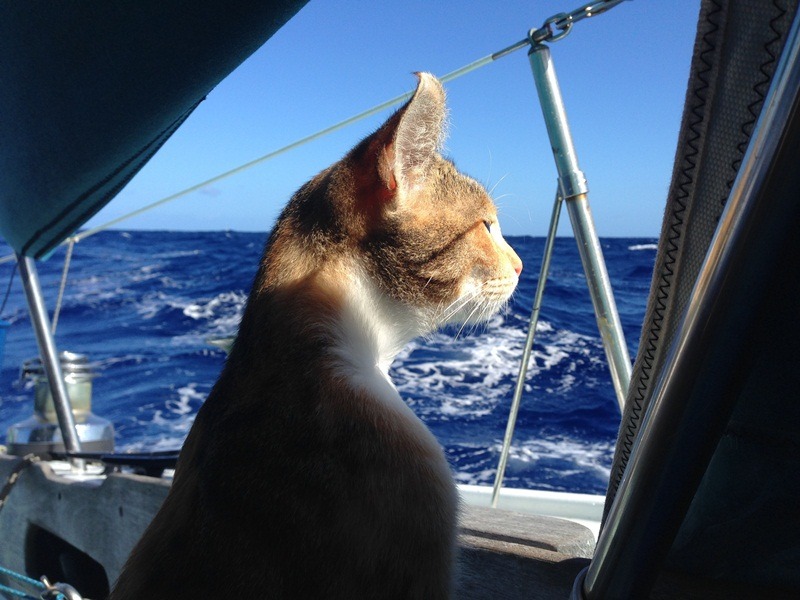 Update March 9, 2015: She’s back! Liz just posted this video on her Instagram feed.

Look who decided she’d finally had enough of her island escapades?!!? I got a call from my friends on the little island Friday morning, saying she’d appeared, healthy and strong and as you see here, she’s got lots of stories to tell… A good reminder that when we Let Go and Trust, the miracles happen…!?!! 💖 thanks for all of your Love and Support through #ameliathetropicat’s 42 day island sabbatical!?

After college, Liz Clark departed Southern California in her 40-foot sailboat, Swell, enchanted by foreign waves and cultures. Nine years and 20,000 nautical miles later, Swell is still her floating home and transportation. When she’s not surfing perfect reef passes in the South Pacific, she’s working to raise environmental awareness through writing and photography. Liz is the author of Swell: A Sailing Surfer’s Voyage Of Awakening.