I have just returned to Seattle from a three-week trip to the Central Alaska Range with Norwegian climber Bjørn-Eivind Årtun. The weather this May was significantly better than average — apart from a few days of snow showers and a wind storm that lasted for a few days, the weather was consistently mild. The weather forecast on the other hand was consistently pessimistic, and was dead wrong about 85% of the entire month (we slowly learned to ignore it).

We first warmed up with a climb of the "Mini Moonflower," (a sub-peak off of Mt. Hunter's Northeast Ridge) via its North Couloir. Bjørn-Eivind leading in the couloir: 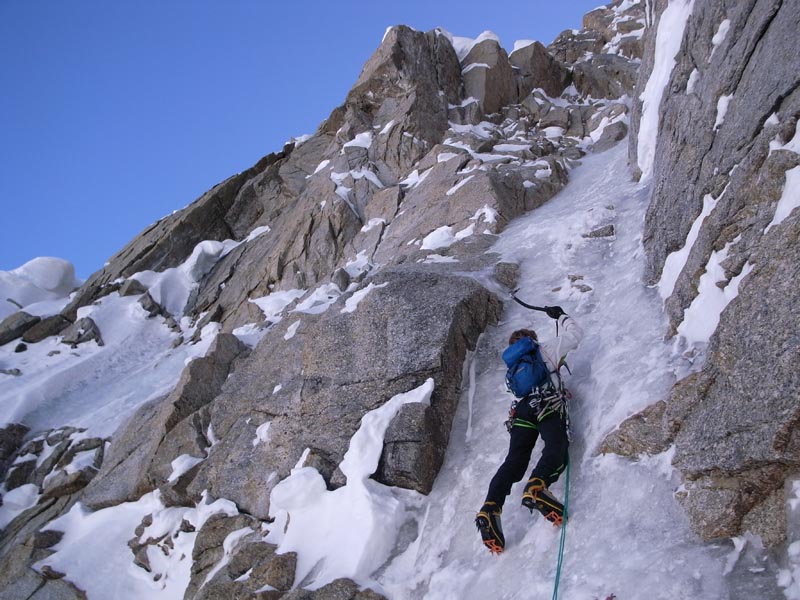 And arriving at the sunny summit: 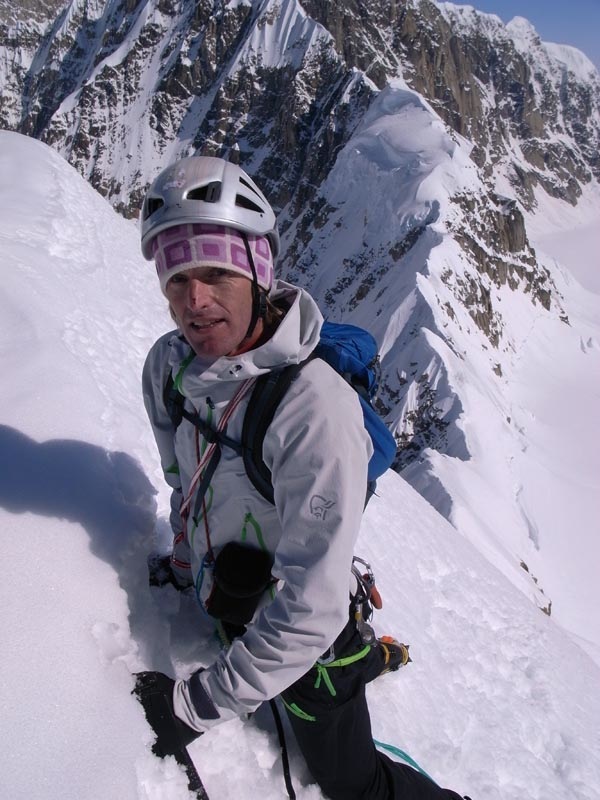 Next we climbed Kahiltna Queen (aka Humble Peak) for a bit of acclimatization via its West Face. This day was actually fairly snowy, which made for a lot of spindrift avalanches during the descent. Bjørn-Eivind down-climbing up high: 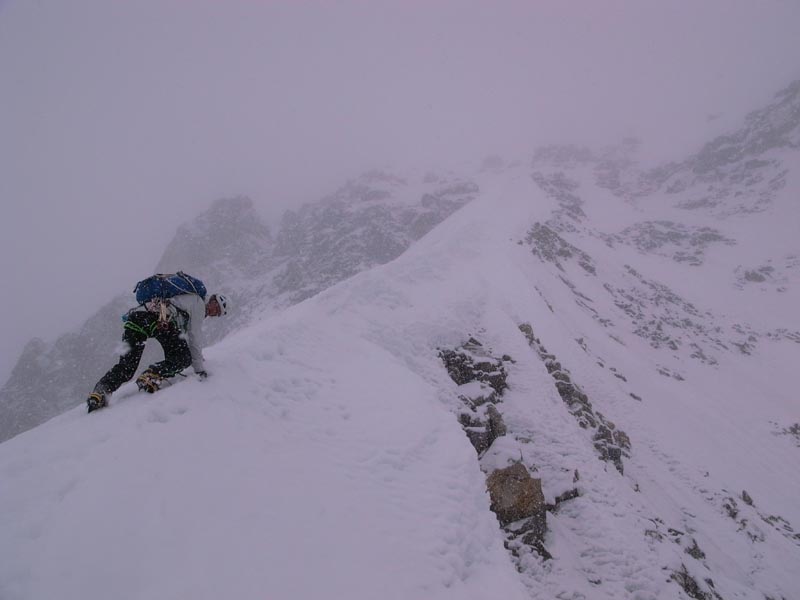 We brought a small rack and two ropes, but never ended up using any of it during the ascent or descent. Colin during the descent:

Next we geared up for an attempt of the Bibler-Klewin on Mt. Hunter's North Buttress (commonly and erroneously referred to as the "Moonflower Buttress"). First climbed in 1983 by Todd Bibler and Doug Klewin, this route snakes up an aesthetic line of ice streaks on the crest of the North Buttress.

We crossed the bergschrund at about 8:30am, simul-climbed up the initial ice slopes to the base of the first steep pitch, and I began the first block. Colin leading the second of the "Twin Runnel" pitches: 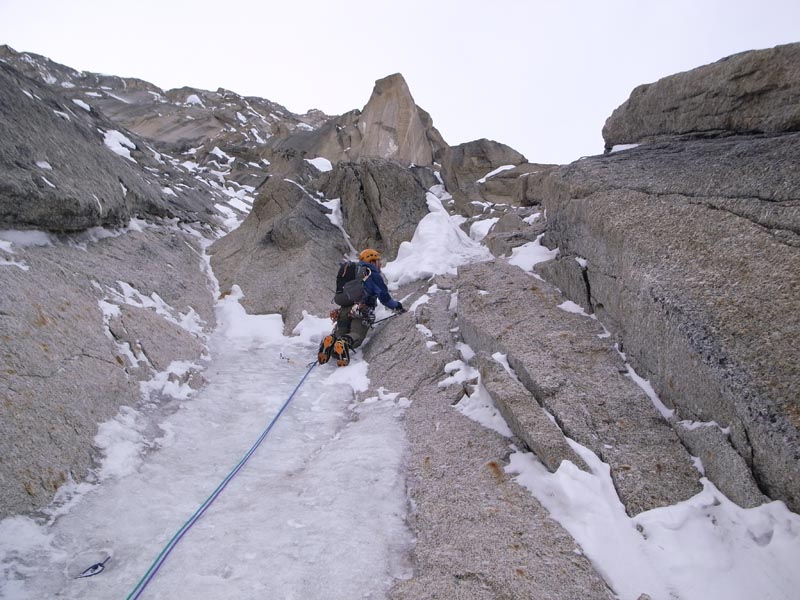 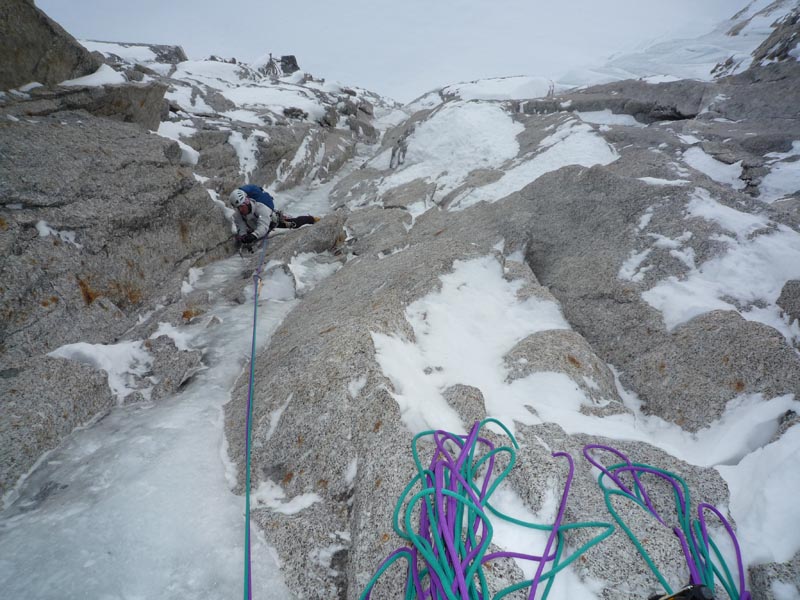 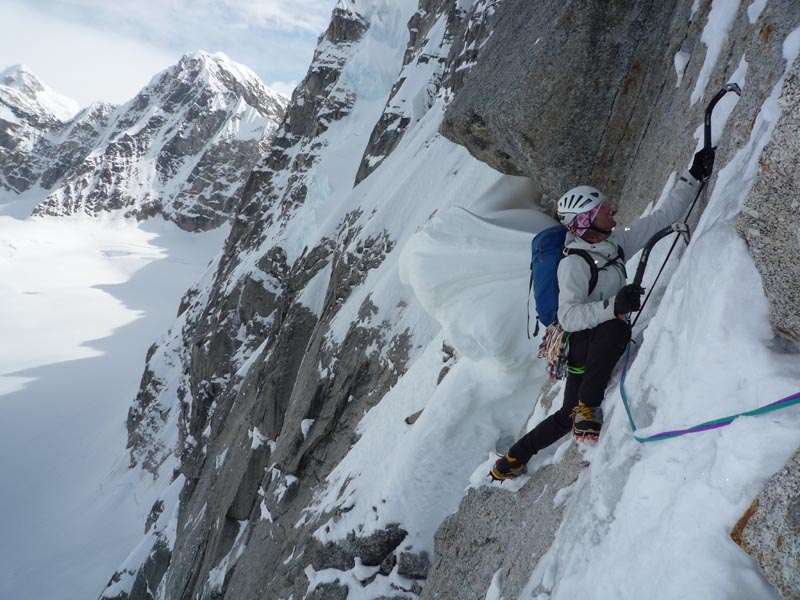 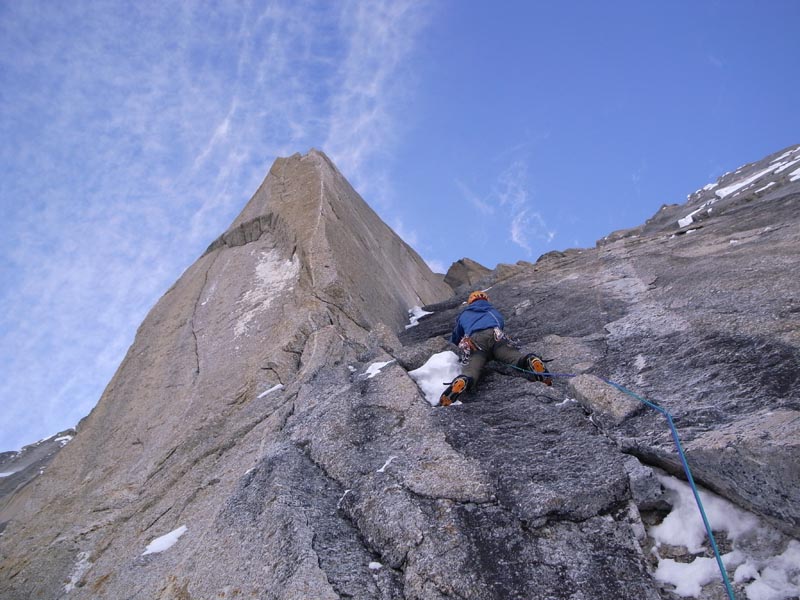 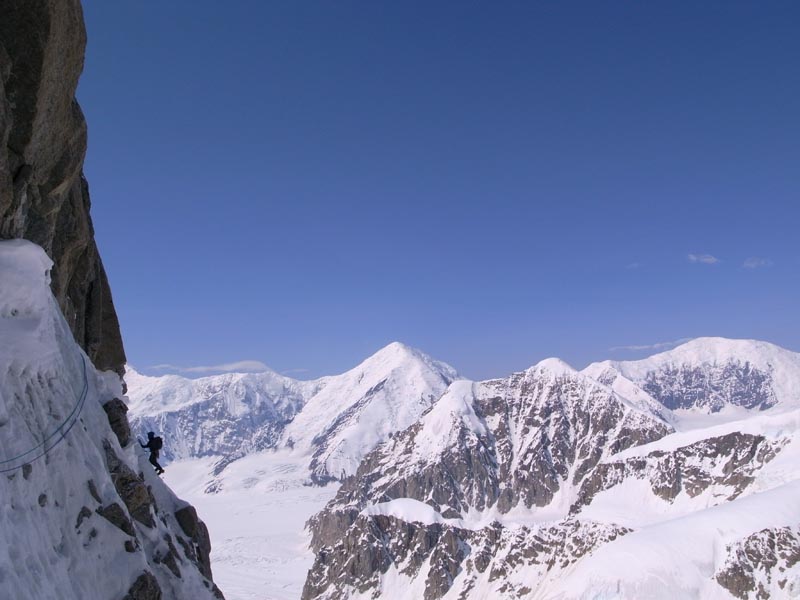 We switched blocks at the top of the first icefield, and soon Bjørn-Eivind was leading the "Death Mushroom" pitch (it was this snow mushroom that tragically collapsed and killed Steve Mascioli during his attempt on the route with Alan Kearney): 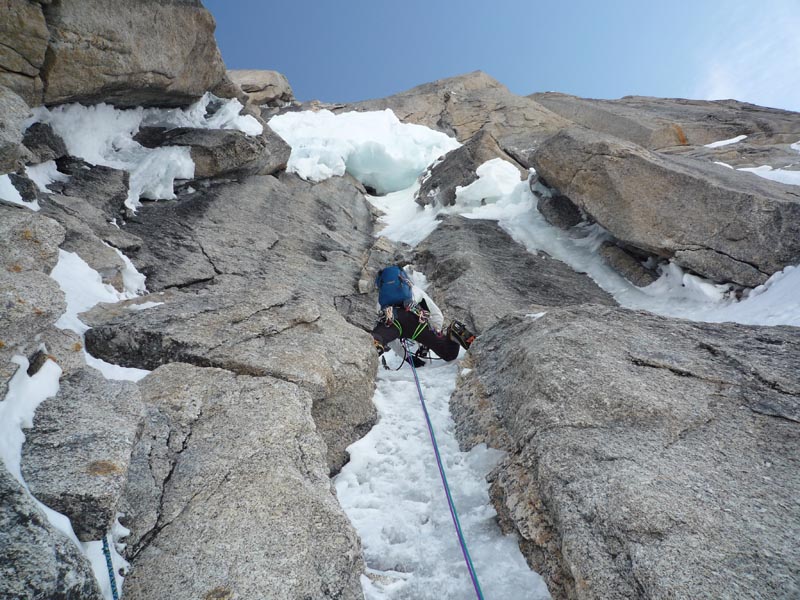 Bjørn-Eivind leading the first pitch of "The Shaft:" 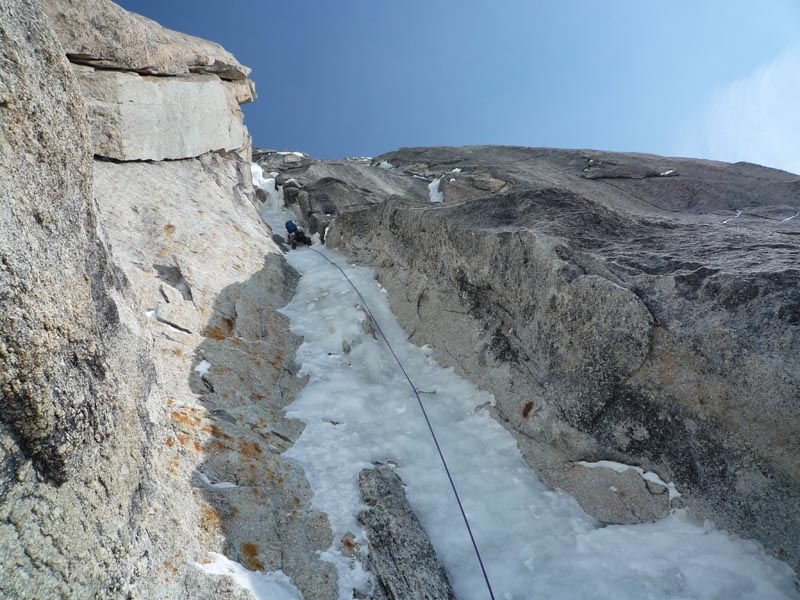 Colin arriving at the belay mid-way up "The Shaft:" 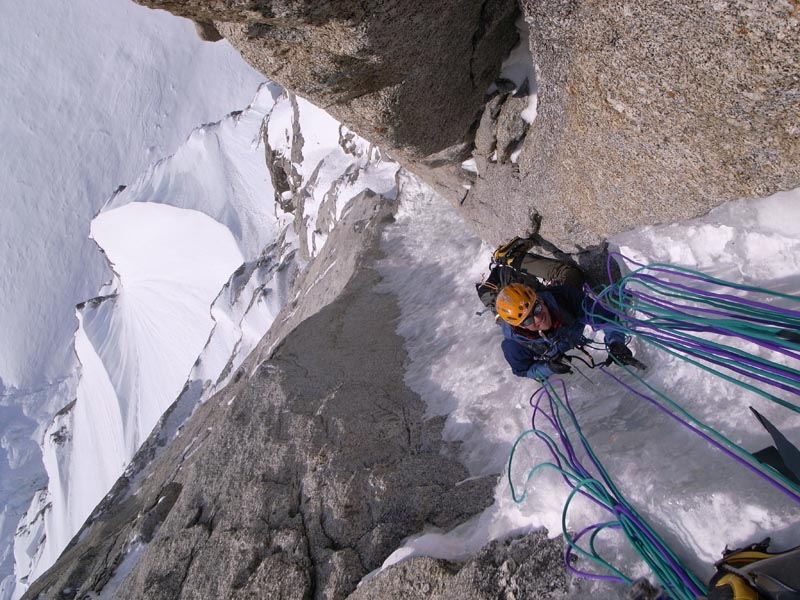 We switched blocks once more at the top of the third icefield, and soon after it became dark as I led through the "Bibler Come Again" exit pitch. We simul-climbed most of the way up the final icefield until arriving at a nice crevasse/bergshrund which was a perfect resting spot. Bjørn-Eivind arriving at our rest-stop: 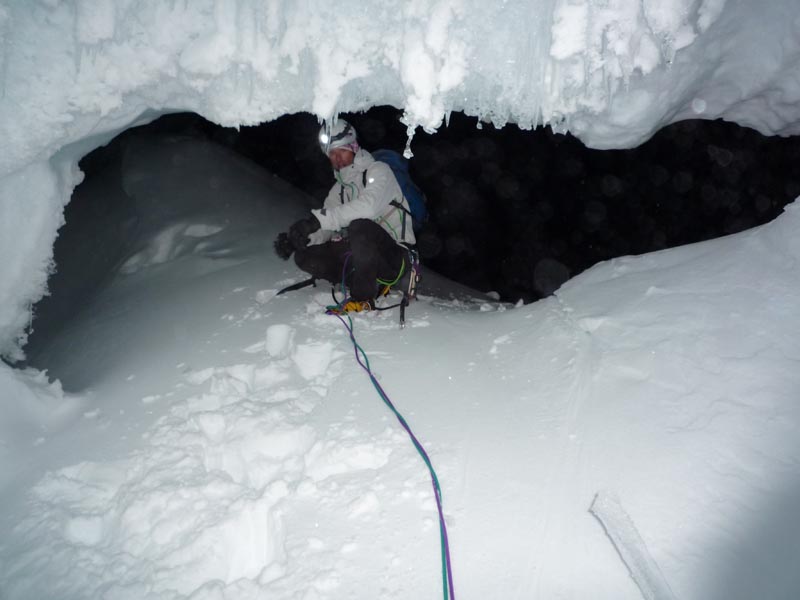 After resting and melting snow for several hours we left our wind-protected nook as it was getting light, and headed towards the summit, unfortunately amidst worsening weather. Bjørn-Eivind on Mt. Hunter's upper Northeast Ridge: 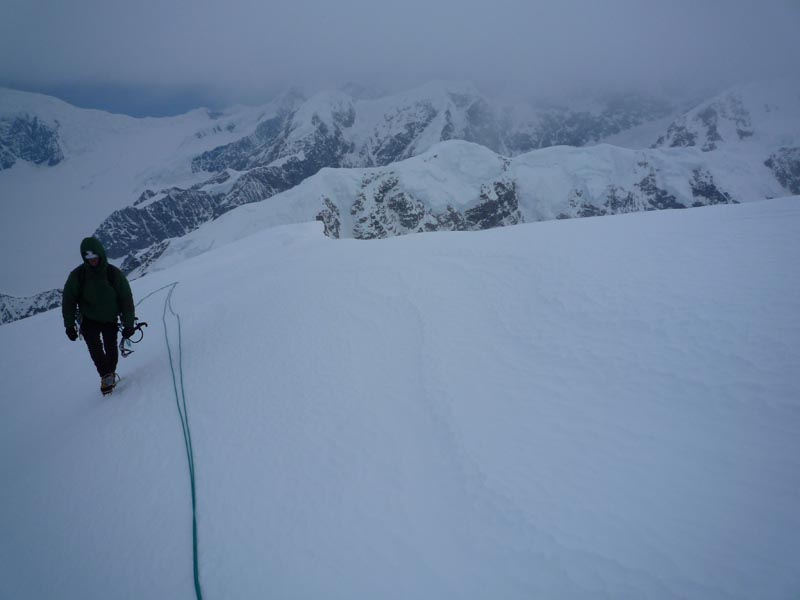 As we climbed towards the summit the weather deteriorated more and more, with the forecast winds getting stronger by the minute (After finally learning to ignore the weather forecast, it was right for once!). At first it didn't seem to be too much of a problem, but soon we were unable to stand in the gusts. It was painful to abandon our attempt on a high plateau only 100 meters below Mt. Hunter's summit, but as soon as the decision was made we realized that simply getting down would be a big worry in itself. Without goggles we were almost blind while down-climbing back to the top of the North Buttress, taking twice as much time as the ascent had. Descending the buttress itself was a long, tiring affair of 1,300 meters of rappelling, but fortunately more sheltered from the wind. Colin at our high point: 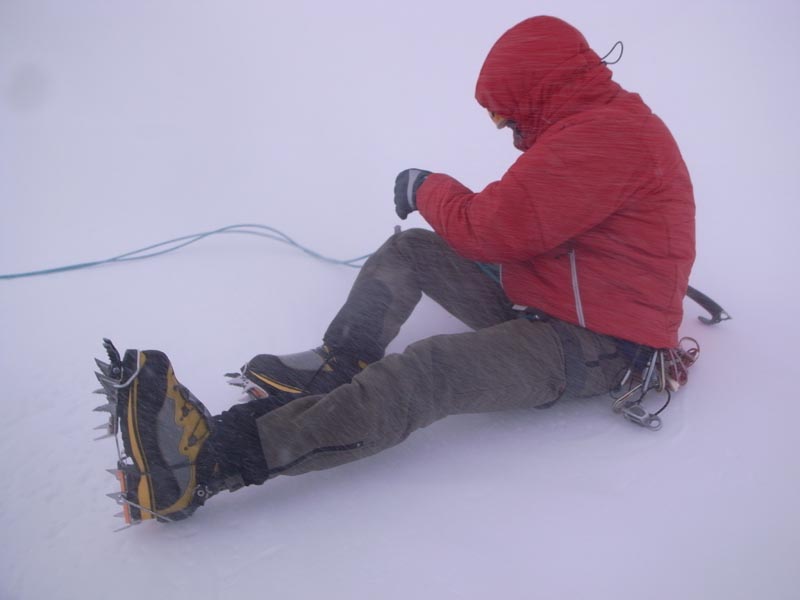 Back in basecamp, our climb on the Bibler-Klewin felt bittersweet. Sweet because the route was beautiful, and we climbed well in a fast, lightweight style, taking about 16 hours from the bergshrund to our brew stop. Bitter because in alpine climbing the top is the top, and our climb was never finished. It didn't take long to decide we wanted to go back on Mt. Hunter's North Buttress and climb to the summit. Since our strategy of no bivy gear had worked so well on the Bibler-Klewin, we decided to apply the same tactics to a slightly harder route, the Grison-Tedeschi (aka French Route, aka North Couloir). First climbed in 1984 by two French alpinists, I personally think it is the classiest line on the North Buttress, first climbing the obvious couloir and then tackling the upper headwall that the other routes avoid.

After a few rest days we were back at the base of Mt. Hunter's North Buttress. We simul-climbed from the bergshrund to near the top of the couloir before pitching out a couple steeper ice pitches. Bjørn-Eivind on the first belayed pitch:

Bjørn-Eivind leading the second belayed pitch, which gained the top of the couloir: 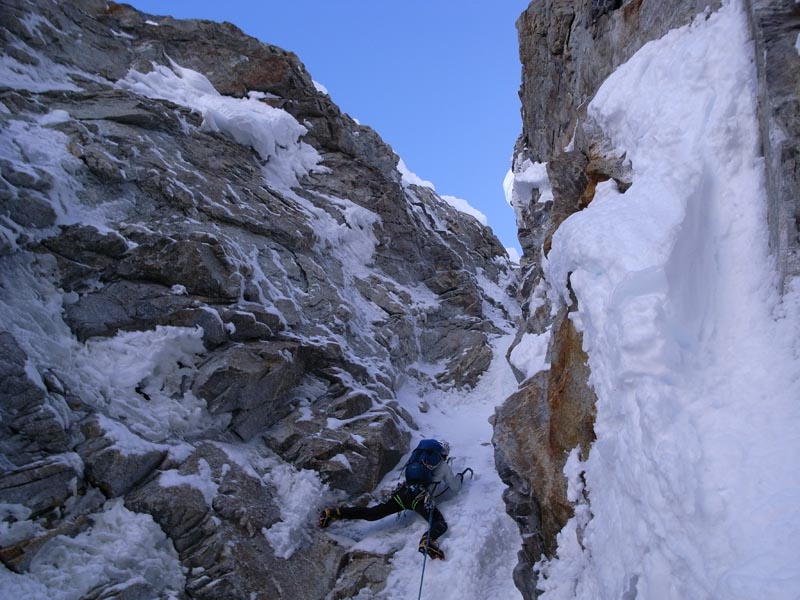 Bjørn-Eivind following a short, corniced snow arete above the top of the couloir:

Bjørn-Eivind leading an ice runnel above the top of the couloir: 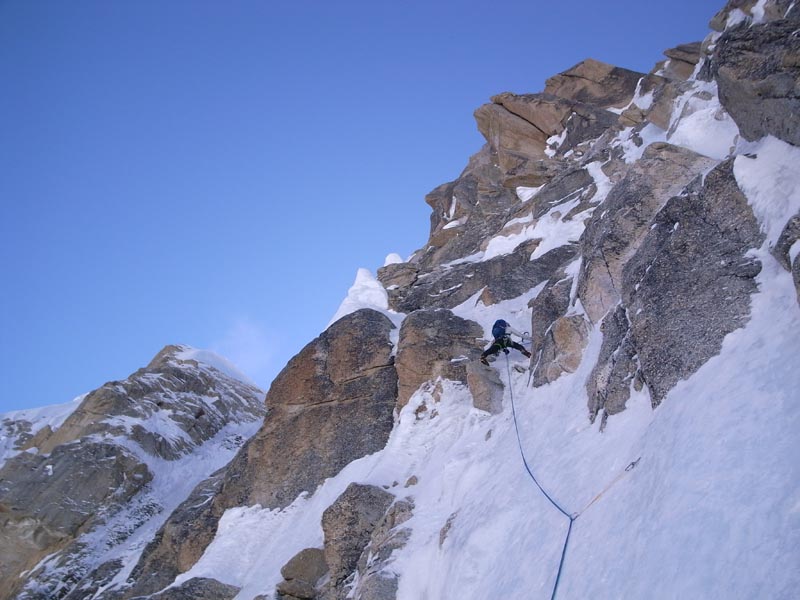 Colin traversing up to the base of the "Black Band:" 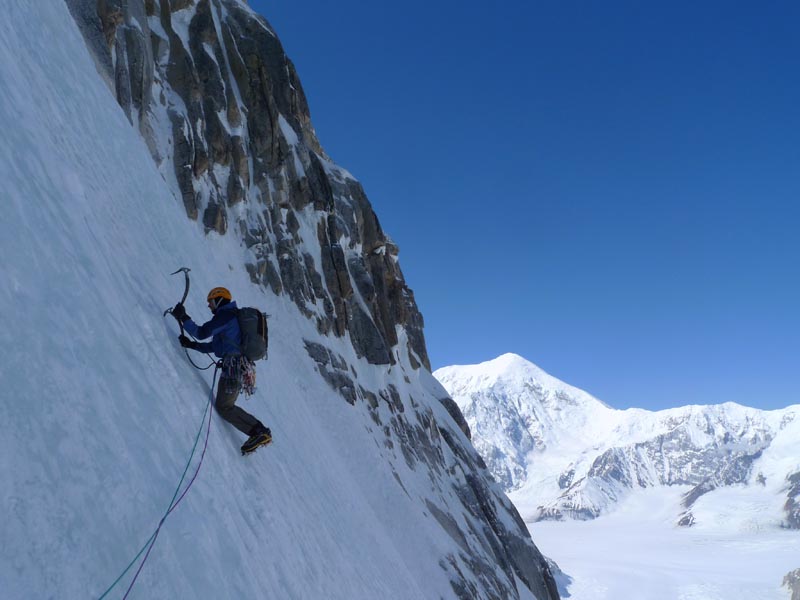 Colin beginning a steep ice pitch through the "Black Band:" 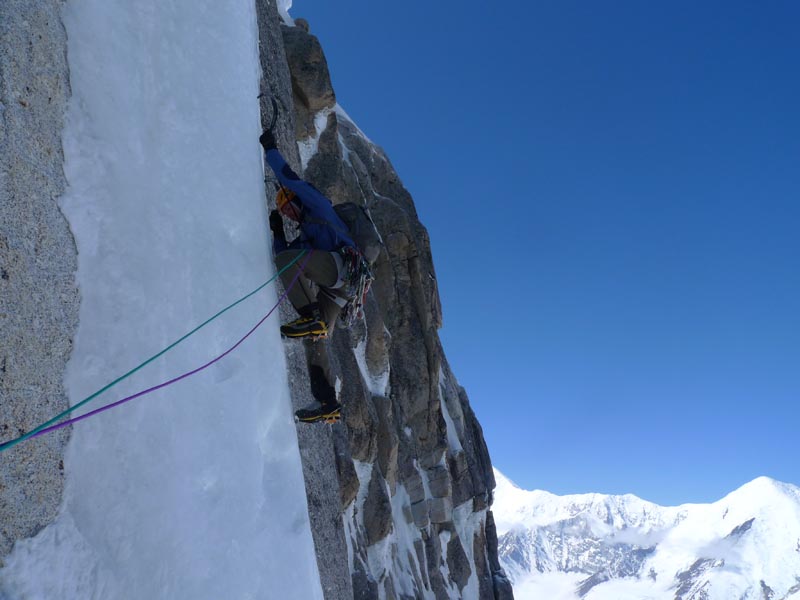 Bjørn-Eivind starting the first pitch of the upper headwall: 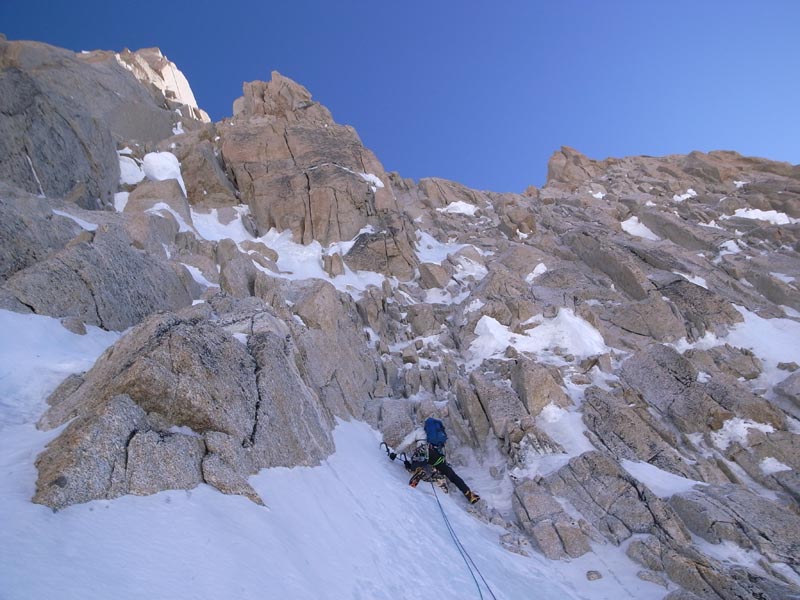 Colin following on the headwall: 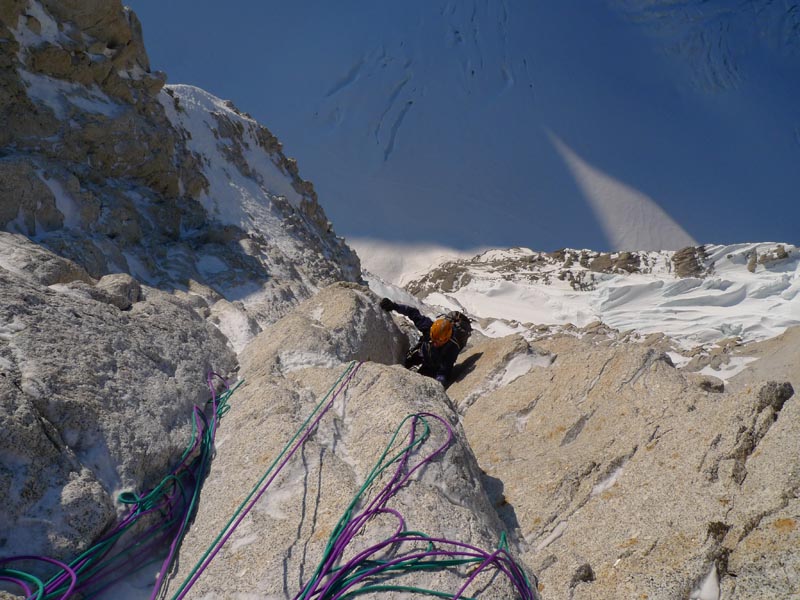 Colin leading near the top of the headwall: 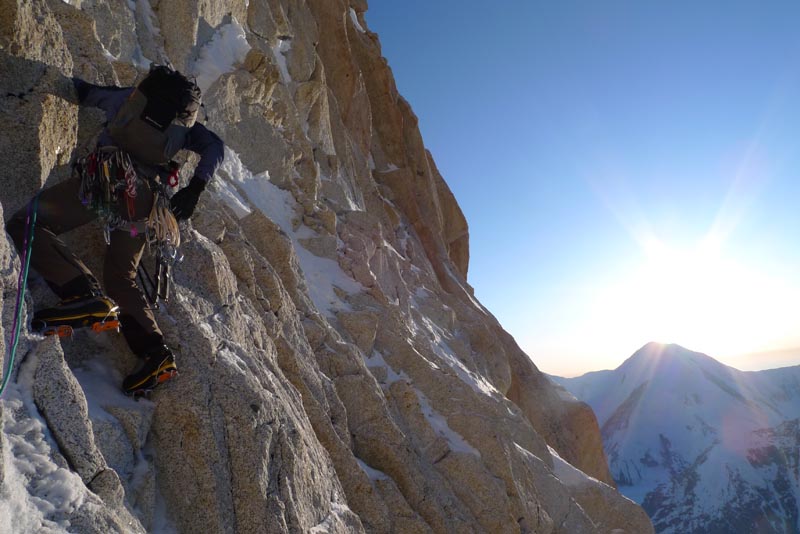 Bjørn-Eivind following a pitch near the top of the headwall in the last rays of alpenglow: 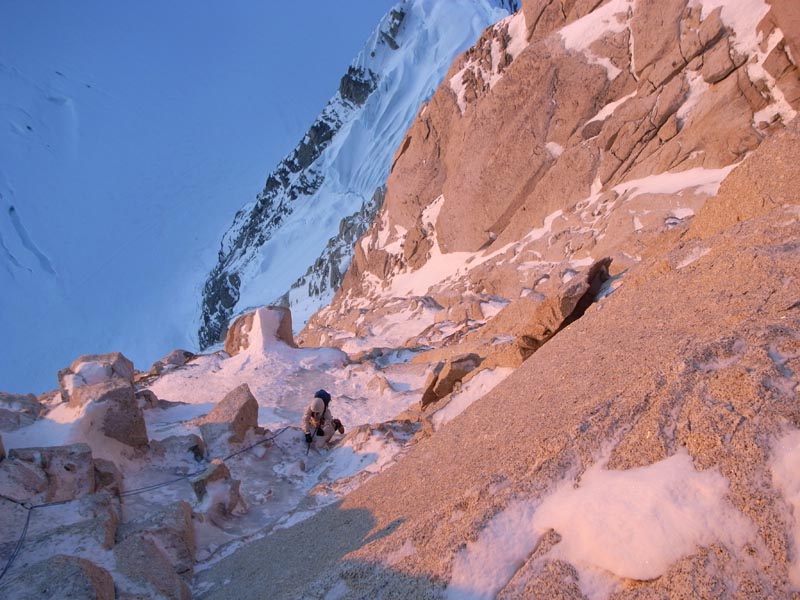 Above the headwall we simul-climbed up ice slopes until the top of the North Buttress, and then took shelter from the wind in a bergschrund. It wasn't nearly as comfy as the crevasse at the top of the Bibler-Klewin, but nonetheless a nice spot to sit down and melt snow. Bjørn arriving at our brew-stop: 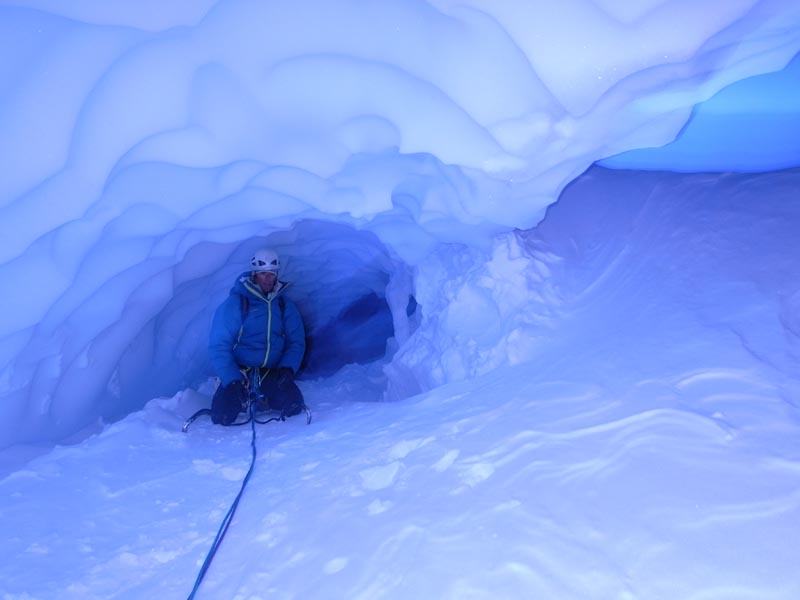 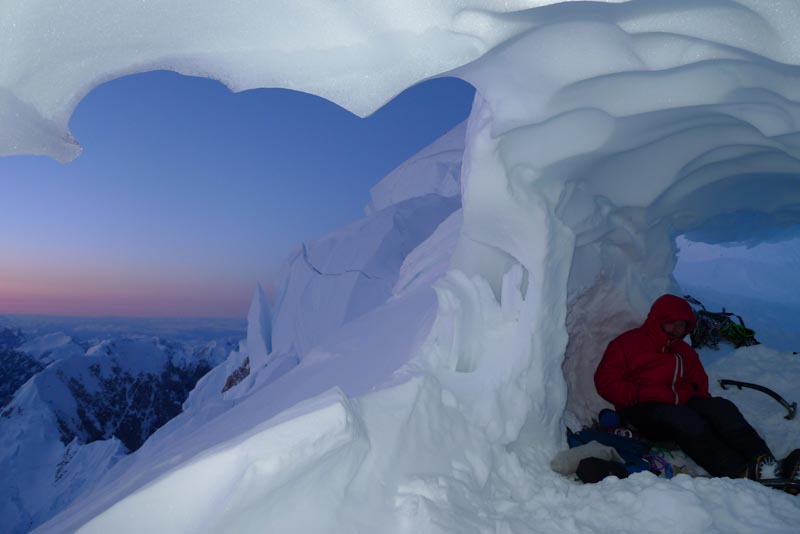 After a few hours we headed up towards the summit as it was getting light, this time under beautiful, blue skies. Colin arriving at the summit: 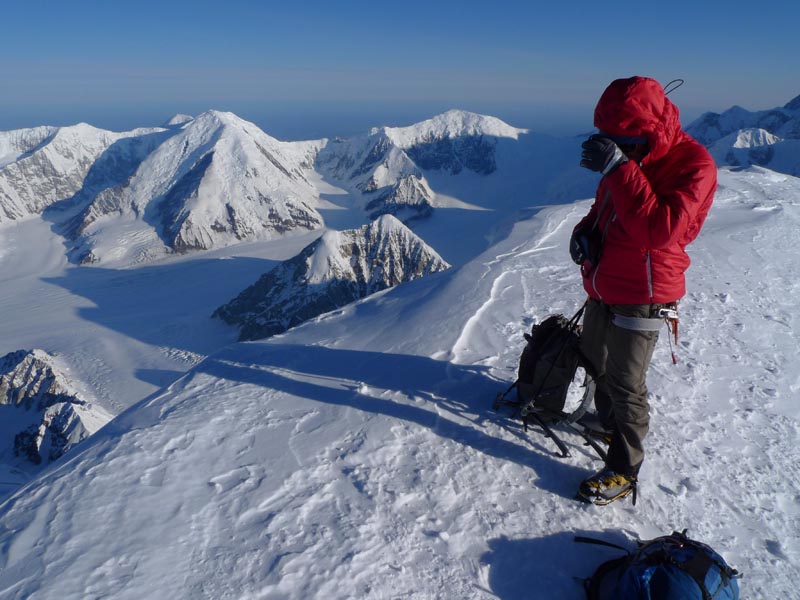 On the summit of Mt. Hunter after the fourth ascent of the Grison-Tedeschi: 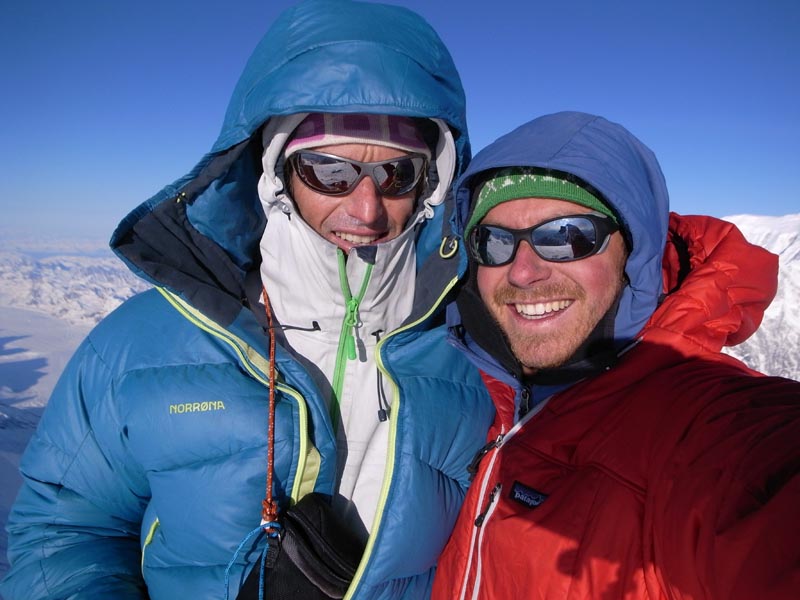 We had originally planned to descend the North Buttress, but since we had already rappelled all of the North Buttress following our attempt on the Bibler-Klewin, we decided on a whim to descend the West Ridge instead in the name of seeing more of the mountain. The descent via the West Ridge did not take significantly longer than rappelling the buttress, but was much more tiring. Bjørn-Eivind after our descent of the West Ridge, before the soul-destroying hike back to basecamp: 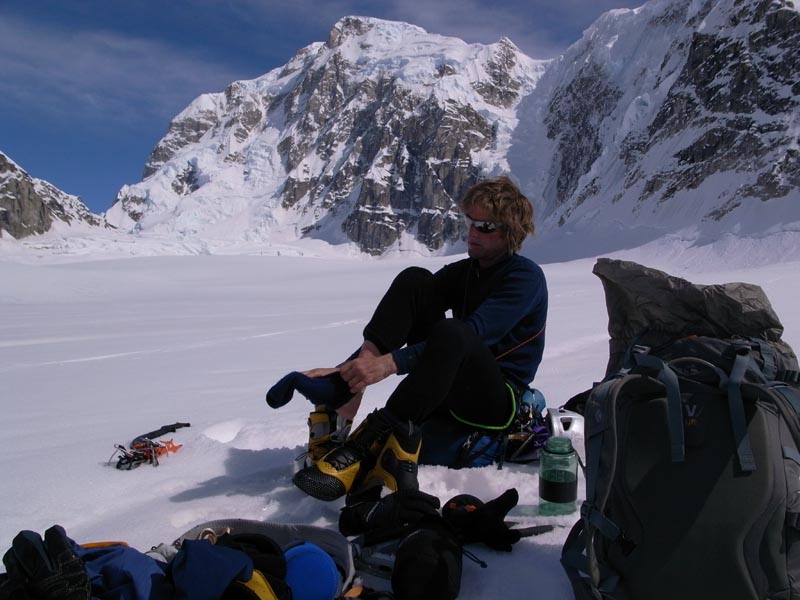 We had hoped to make one more climb, but with one week left on the glacier and a poor weather forecast we opted instead to fly down to Seattle and climb sunny granite on the Index Town Walls.

The North Buttress of Mt. Hunter saw a lot of activity while we were in the range. Other ascents:

Colin Haley also appears in the Tin Shed:
An Attempt at the Ogre
Torre Traverse