On Saturday October 3, 2015, over 300 people—fishermen, Native Americans, farmers, orca lovers, business owners, students, salmon advocates, kayakers, and conservationists—took to the lower Snake River in southeastern Washington, a short distance from the Lower Granite Dam. Together, this diverse group formed the “Free the Snake Flotilla.” They were a representative slice of the movement that includes many thousands of people worldwide who are calling for the removal of four deadbeat dams on the lower Snake. Over 130,000 people have signed petitions and sent postcards and letters asking President Obama, his administration, members of Congress and key state and federal agencies to take these harmful dams out.

As they gathered in kayaks and other water craft, this group of unlikely activists all agreed that the current situation on the Snake is unacceptable, and growing worse by the year: Thousands of endangered salmon died this summer due to over-heated river and reservoir water; endangered orcas are malnourished because their favorite food supply of Snake River Chinook salmon has been decimated by the dams; and, over $9 billion in government spending over the past 30 years, mostly on hatcheries and other failed approaches, hasn’t recovered any endangered wild fish runs.

“This was my first protest in 68 years. I was so impressed at the variety of people who turned out: kayakers, businesses, fishermen, young people and old people,” said Chris Kopzynski, president of Kop Construction in Spokane, WA. “It was a moving experience to see that many people who understand that we have too many dams on the Snake River. I hunted and fished the lower Snake before the dams, and I look forward to watching that river run free again.”

Check out the photos below, contributed by photographer Ben Moon and DamNation Producer Matt Stoecker, and add your voice to the chant led by flotilla participants, and heard by officials standing on the dams: Free the Snake! 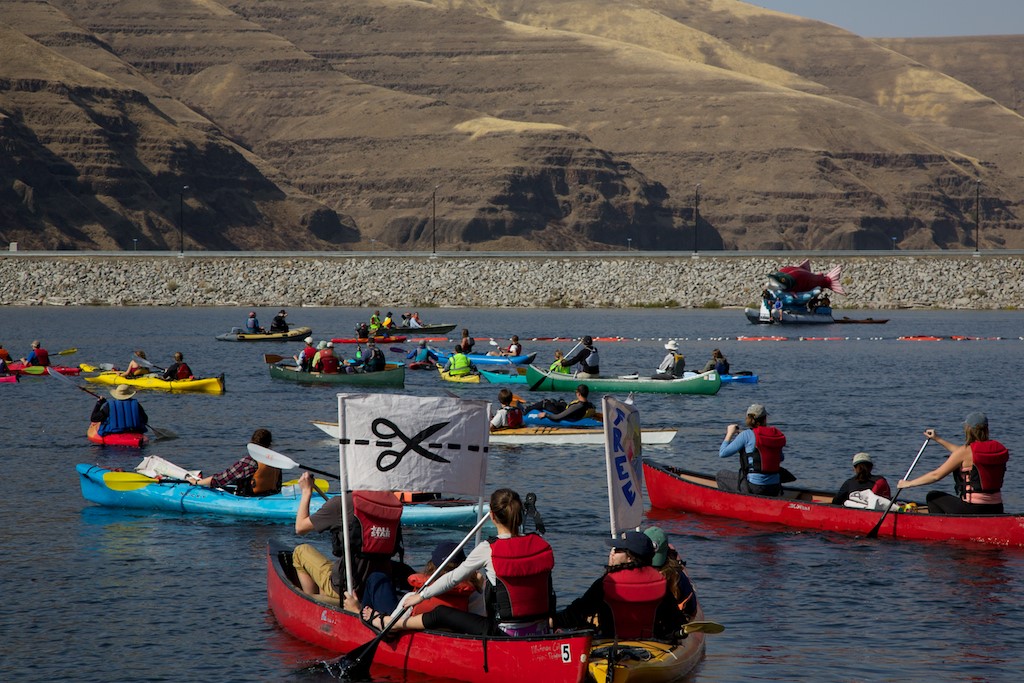 Snake River area farmer Bryan Jones believes that a free-flowing river and productive agricultural economy can go hand in hand. Shipping grain and other produce with the existing railway is already a lower impact alternative to the declining barge traffic that is dependent on harmful dams. Photo: Ben Moon 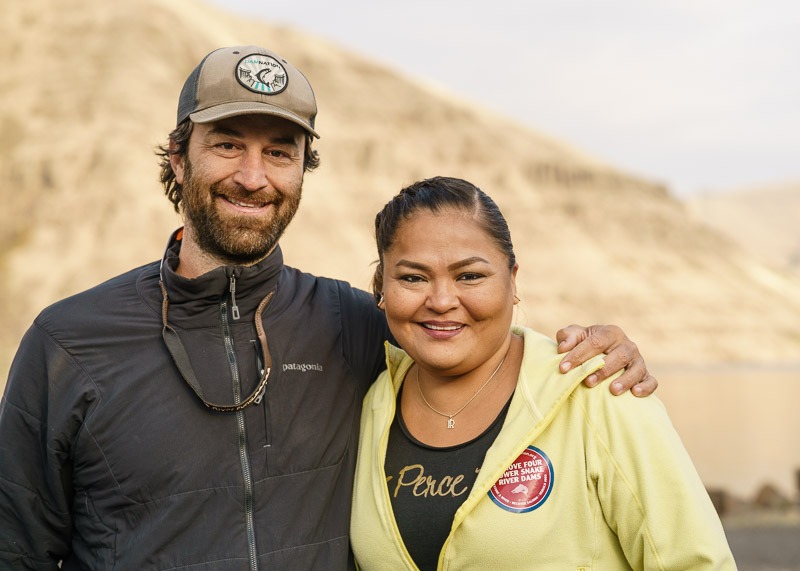 DamNation co-producer Matt Stoecker and Rebecca Miles of the Nez Perce tribe. A powerful voice in the film and everywhere she goes, Rebecca continues to promote lower Snake River dam removal as the best way to restore the salmon fishing culture of her tribe. Photo: Ben Moon 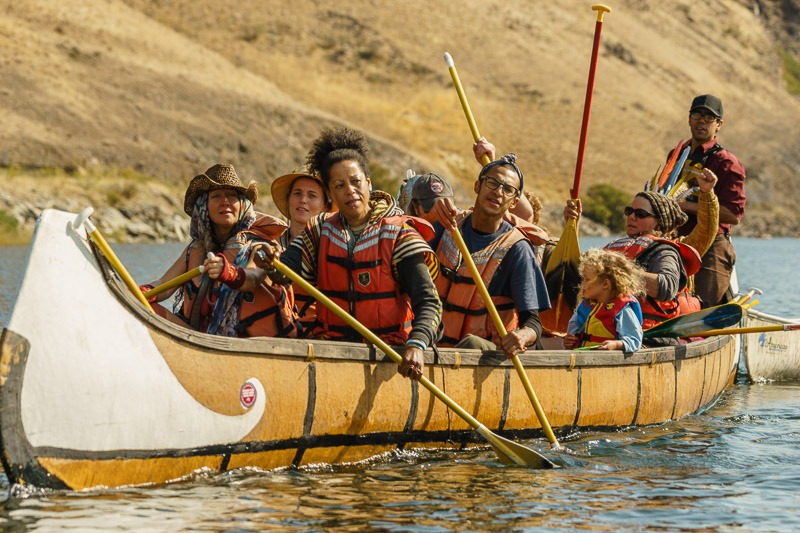 From solo kayakers to huge canoes, friends and families dug deep and formed a line of boats that stretched for over a mile as they approached Lower Granite Dam. Photo: Ben Moon 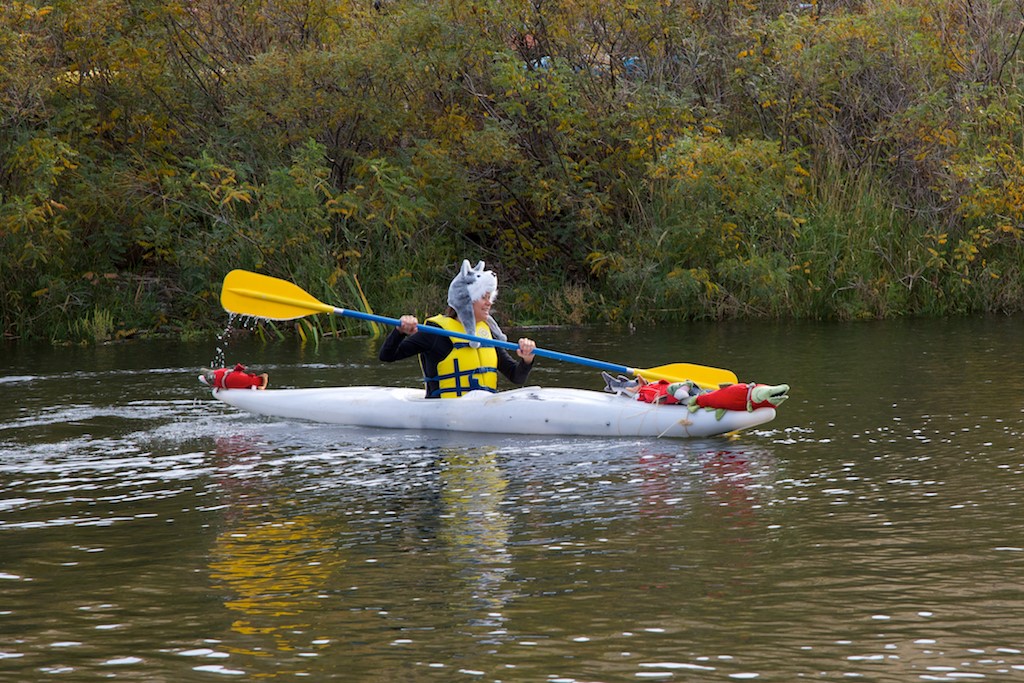 Restoring large runs of sockeye and other salmon to the headwaters of the Snake River in Idaho will benefit dozens of species, including wolves. Photo: Matt Stoecker 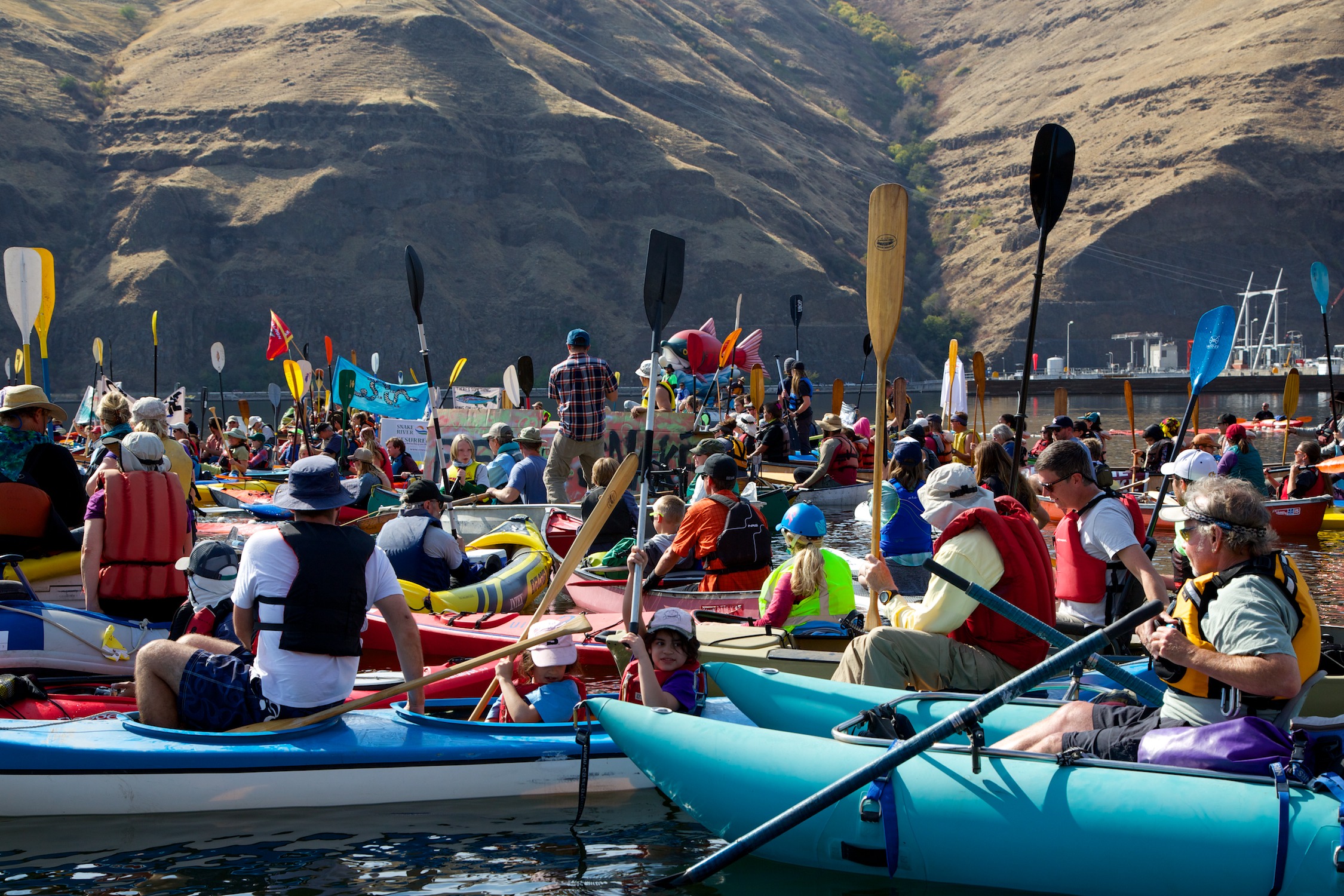 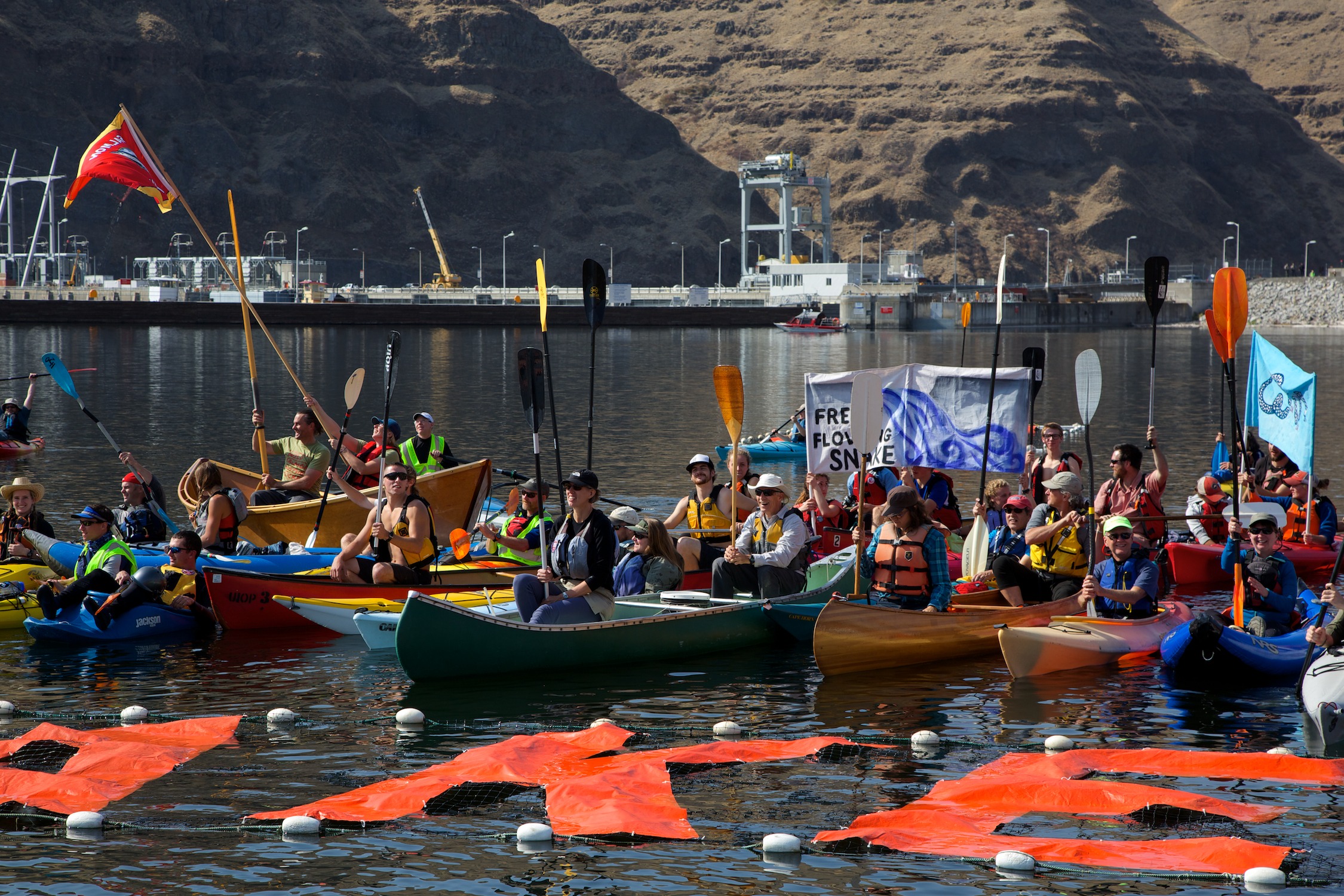 The loud chanting of “Free the Snake!” spread out across the reservoir and was heard by Army Corps officials on the dam behind. Photo: Matt Stoecker 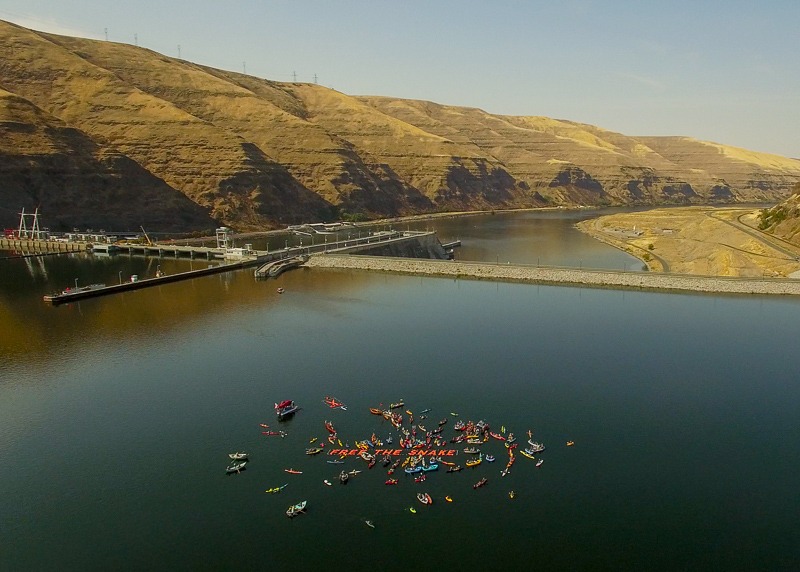 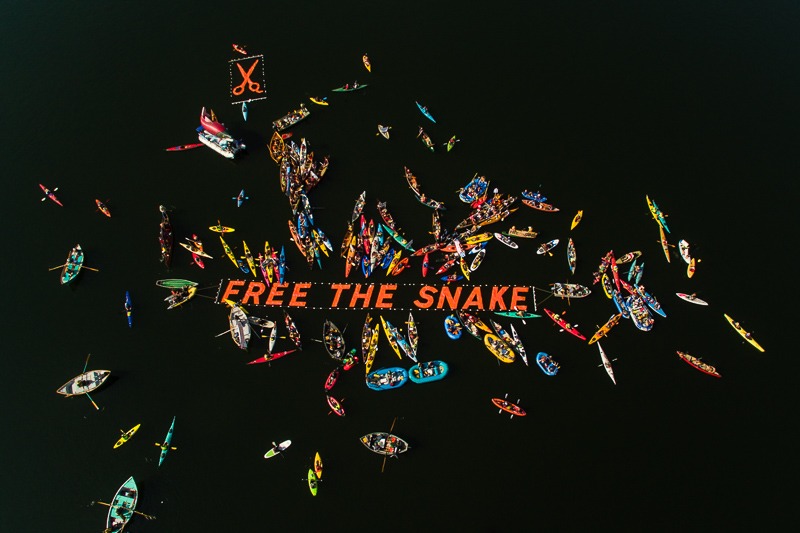 Over 300 paddlers sent a clear message from slack water behind one of the four dams choking the Snake River, southeastern Washington. Photo: Ben Moon

Our thanks for this incredible day of action go to: Sam Mace and Save Our Wild Salmon, Brett Haverstick and Friends of the Clearwater, Rebecca Miles and the Nez Perce tribe, Nimiipuu Protecting the Environment, DamNation Producer Matt Stoecker, photographer Ben Moon, the Backbone Campaign for the incredible banners, Lonesome Larry the inflatable Sockeye Salmon, Idaho Rivers United, Brett Vandenheuvel and Columbia RiverKeeper, the Southern Killer Whale Chinook Initiative, Snake RiverKeeper, Whitman College students, Fighting Goliath, the U.S. Coast Guard and Army Corps boat crews for their help ensuring safety…and everyone who attended the Free the Snake Flotilla! Patagonia was a proud sponsor of this event.